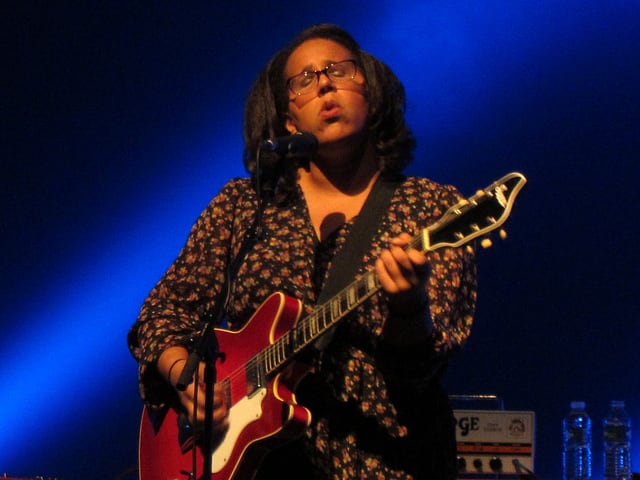 As Jack White moves further away from his White Stripes incarnation and towards his Jack White the Rocking Bluesman persona, he seems to grasp for a slippery authenticity, one that feels more like an act for the Detroit-born frontman than the tangible level of real coolness that exudes (or has exuded) from performers such as Muddy Waters, Buddy Guy or Mick Jagger. It’s something that is inborn, unlearned, a feeling that hucksters can feign but never fully embody.

Alabama Shakes frontwoman Brittany Howard radiates that authenticity without a doubt. It’s no wonder her band’s rocking – yet somewhat derivative – first album Boys & Girls, rocketed to such prominence, earning Grammy nods and garnering sold-out performances such as Portland’s Crystal Ballroom show. Featuring the country-fried swagger of Drive-By Truckers mixed with the come-to-mama sexuality of Sharon Jones, the Alabama Shakes are still touring on Boys & Girls, released 11 months ago, playing larger venues on this genuine victory lap. Last summer, I caught waves of their mid-afternoon set from the parking lot at the Sasquatch Festival. I wish I had arrived earlier. This year, I bet the promoters would have scheduled them much later.

The band took the stage at precisely 11pm, the full house sweaty and fetid from the hard pack of bodies. The Alabama Shakes has the approachability of a bar band, not unlike the Hold Steady without the hyper-literate verbal diarrhea of Craig Finn. But the band appears to know lightning in a bottle when they see it as Howard’s energy elevates the band’s straight-ahead songs into something more magical. It’s not an accident that the rest of the band is shrouded in smoke for the duration of the show.

Howard and company made a daring decision early on, playing big single “Hold On” second after show-opener “Hang Loose.” The crowd, a mix of preppies, burn-out, grandmas and bros, sang along for four minutes of unity. But these are likely the same folks who caught wind of the band on Sirius or the Grammy Awards and when they turned to deeper, slower cuts such as “Boys & Girls” and “Be Mine,” away went that rapt attention. The noise from around the Crystal Ballroom’s bar began as a low din, growing into a roaring wave of rudeness, one that I could hear through my earplugs and even over the crescendos and Howard’s wails during “Rise to the Sun.” It’s a shame because songs such as “You Ain’t Alone” are so much more interesting and soulful than “Hold On.”

Jack White wouldn’t have tolerated that bullshit. He would have taken off his old guitar, thrown it down and walked off the stage. Howard and the Alabama Shakes deserve more respect. Many people don’t care about the real deal. But for those who do, let’s hope Howard can tap deeper into the dark vein of Americana and put out a record that shakes off those looking for the flavor of the month. They are almost there.