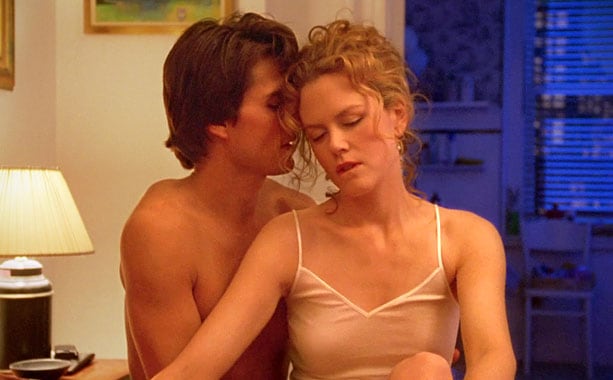 Stanley Kubrick’s final film, released four months after his death at the age of 70, was largely met by puzzlement from the critics. It couldn’t have been a more fitting finale for the iconoclastic master of cinema who routinely watched initial confusion grow into adulation over the course of his career. Some dismissed it as hewing too close to late night Cinemax fare, which I think is a drastic misreading of the film, one that completely misses its inspired satiric bite. It seems to me that Kubrick wasn’t trying to titillate (a surprising number of observers complained that the film wasn’t sexy enough) as much as he was mocking the feverish impulses that spring up around the basest human instincts. This is the id drizzled over a combination of privilege and power and then shaken into a toxic cocktail. Kubrick drolly observes the whole thing, even pushing it to the verge of farce (think of the scenes in the costume shop with Leelee Sobieski dodging her father’s wrath as she canoodles with a couple of Japanese businessmen) without even winking at the audience. It was their responsibility to unpack his meaning, not his to draw them in on the joke. He was blessedly Kubrickian right to the end. – Dan Seeger

Despite being his 17th film, Certified Copy marked a series of firsts for Abbas Kiarostami. It was the first film the Iranian master made as a septuagenarian, the first fiction film he made outside of Iran and the first love story Kiarostami crafted since the unrequited romance at the heart of Through the Olive Trees (1994). Perhaps most notably, the mysterious first-date-cum-broken-marriage dynamic between William Shimell and Juliette Binoche is also the first non-Islamic love story of Kiarostami’s, and the universality of the troubles, quirks and gestures shared between the two partners is indicative of the director’s own talent in surpassing culture, time and religion in delineating the woes of love. If The Report depicted the struggles of domesticity and the abhorrent, hypocritical masculinity Kiarostami saw reflected in himself and Iranian society in the expansion of the late ‘70s anti-Shah sentiment, and if Olive Trees reflected the naiveté and stubbornness of young unrequited love through the perspective of an older and wiser man, Certified Copy is then Kiarostami’s most intimate, knowledgeable and revealing portrayal of love, one marked by accrued years of acumen in such matters, and like many of his works, one with few autobiographical markers that nonetheless bears such overbearing familiarity and intimacy with the material that one can only assume Kiarostami wrote from experience. But like the “true” nature of the relationship between Shimell and Binoche, such details matter very little in Kiarostami’s all-absorbing diegeses. — Tina Hassannia

Before it was finally released, Frenzy was commonly referred to as the greatest film Alfred Hitchcock never made. After a year of feverishly working on and off the project with a slew of collaborators, Hitchcock had great difficulty getting studios to sign off on what they saw as an explicitly violent screenplay. Even his biggest supporters—including François Truffaut—weren’t sold on the script, and once production began it was slowed down by freak incidents, including a stroke suffered by Hitchcock’s wife and frequent collaborator, Alma Reville. But all of the director’s stress melted away upon its release and subsequent immense critical praise. Indeed, Truffaut remarked that the director looked 15 years younger at the Cannes screening, by which time the film had begun garnering acclaim. Frenzy marked Hitchcock’s last British film, and it is a distinct throwback to an anachronistic London. The film’s depiction of the British metropolis is indeed an incredibly nostalgic one—take note, for example, the prominent use of Covent Garden as a setting—and there is perhaps no clearer indication of Hitchcock’s reverence for his British upbringing than the outdated dialogue that courses through the film. Hitchcock was 72 during the film’s production and had begun to show signs of slowing down, taking longer during shooting days than usual for a director well-known for his efficiency. Frenzy feels very much like a cinematic goodbye letter to the director’s homeland, as well as to the style he established in the former half of his career. — Tina Hassannia

A film found in a dumpster, Varda’s fantastic twilight-era profile is also a reflexive act of self-documentation, profiling both the fringe collectors who make their living off apparent junk and the free-spirited filmmaker profiling them.

Less directly autobiographical than 2009’s The Beaches of Agnès, The Gleaners and I places its focus on the scruffy outsiders whose lives operate within totally alien cycles of consumption, living off misshapen potatoes or proceeds from secondhand sales. It’s the perfect subject for a director who’d conducted her entire offbeat career at a nexus between ethnographic character studies and cinéma-vérité self-assessment. Continuing to produce her own passion projects at an age when most filmmakers have been relegated to the realm of memory, Varda uses the film as a chance to goof around with a camera as much as she does to capture the stories of her subjects, exhibiting the sort of thrilling buoyancy rarely found in documentaries. – Jesse Cataldo