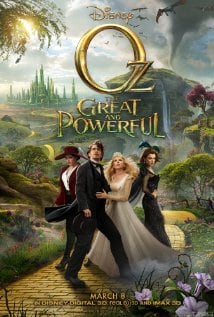 [xrr rating=2.25/5]Seventy-four years have passed since the release of The Wizard of Oz yet many of its characters magically live on, indelible members of our popular culture. Somehow director Victor Fleming captured lightning in a bottle and convinced us that a lost little girl, a mindless scarecrow, a cardio-challenged tin man and a craven lion could be lovable and loved for more than seven decades. The Land of Oz is a fecund place, one that has been mined for ill-advised sequels and ill-advised musicals (The Wiz, not Wicked), yet a film made during the dawn of talking pictures remains the gold standard, full of characters and songs that we still love and care about. Unfortunately, Sam Raimi’s big-budgeted Oz the Great and Powerful contains no such thing and becomes yet another bad trip back to the land created by L. Frank Baum.

Commandeered by the masterminds at Walt Disney Pictures, this incarnation of Oz and its stars may be pretty to look at, but nearly every aspect of the production is empty-headed. Feeling its length at an onerous 127 minutes, Oz the Great and Powerful acts as an unofficial prequel, tracing the genesis of not only the man behind the smoke and mirrors but the origin of the Wicked Witch of the West. Although there are certainly nods to Fleming’s masterpiece that will delight fans old and new (the Emerald City, the soporific poppy field), most of the aforementioned characters do not appear here. Instead, Raimi and writers Mitchell Kapner and David Lindsay-Abaire create a host of extras, a talking winged monkey and a living porcelain doll that trades on cute, but comes across as vapid and forgettable.

Raimi, the legacy of his Evil Dead films becoming a distant memory under the taint of studio fodder such as The Gift, For the Love of the Game and the Spider-Man trilogy, could have been an interesting choice to return us to Oz, but rather than be the work of an auteur (and one cannot really use that term for Raimi) Oz the Great and Powerful feels Disneyfied, wholesome and safe. James Franco may bring the charm to his huckster Oscar Diggs who is carted to Oz via hot air balloon during a Kansas tornado, but Michelle Williams, Rachel Weisz and especially Mila Kunis embody the worst caricatures of being female (weak, weepy, bitchy, jealous).

Explain this: Oz the Great and the Powerful (released circa 2013) proffers that the Wicked Witch of the West is such a bitch because she was spurned by a man. The Land of Oz is totally fucked, about to be controlled by a pair of evil women until a man arrives and saves it. Good Witch Glenda (Williams) is pretty helpless. Rewind back to 1939. Let’s look at the gentleman characters: it takes a female to help wrangle a group of males that lacks brain, heart and balls. The main masculine character turns out to be a fraud. Have we regressed so far? It’s embarrassing.

Though Oz the Great and Powerful does offer some great eye candy, it is a wasted opportunity (and a foolhardy one) to add to the Oz mythology. Fleming’s film begins with a black and white prologue that is grounded in Dorothy’s reality. She draws people and pieces of that reality into the land of Oz. Franco’s Oscar is a bumbling , self-serving ass in both Raimi’s black and white introduction and throughout the colored portion of the film. Scaring off a few witches doesn’t earn you brawn, especially in a film that lacks both a heart and a brain like Oz the Great and Powerful.