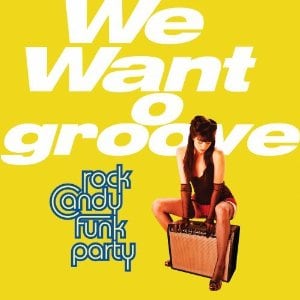 [xrr rating=3.75/5]Although guitar phenom Joe Bonamassa plays on We Want Groove, which was released on his own J&R Adventures label, make no mistake: this is definitely not a Joe Bonamassa record. In fact, Rock Candy Funk Party began as a side project for drummer Tal Bergman and guitarist Ron DeJesus, who together self-released an instrumental disc called Grooove Vol.1 back in 2007. Recruiting bassist Mike Merritt and keyboardist Renato Neto, they began gigging occasionally at The Baked Potato, the legendary L.A. jazz club. Collectively, these seasoned pros have a résumé a mile long, including playing with the likes of Prince, Billy Idol, Chaka Khan, Rod Stewart and Bruce Springsteen. Bergman, who had toured with Bonamassa, asked him to sit in at a couple of gigs in 2012 and it went so well Bergman proposed going into his home studio to make an album. Recorded and mixed in a week, We Want Groove is the result. A collection of funky jazz/fusion instrumentals, this CD will likely confound blues-rock purists who make up the bulk of Bonamassa’s fanatical audience. But just take a look at that cover (a send up of Miles Davis’s 1982 live comeback album, We Want Miles)—obviously, We Want Groove is not to be taken too seriously. This record wants you to lighten up and have a good time. Bonamassa has said playing with Rock Candy Funk Party is “one of my most fun musical experiences to date”—and it sounds like it.

Bonamassa’s role here is to bring the rock to the funk party, much like the contribution Tommy Bolin made to Billy Cobham’s classic fusion album, Spectrum in 1973. Indeed, like the underappreciated Bolin, Bonamassa plays his ass off here and even pulls out some wild ring-modulator effects on “Octopus-e” and “Spaztastic.” But he’s not the star of the show, ceding plenty of solo space to the other players in the collective. DeJesus matches him lick for lick on “We Want Groove,” “Animal/Work” and holds his own on the dueling guitar jam, “Dope On a Rope.” But as spectacular as the guitar playing is, it is Neto’s keyboards that hold it all together. Comping and soloing with supreme taste and facile inventiveness, his Fender Rhodes electric piano, Hohner Clavinet and various synthesizer emulations provide a warm, analog glow to every track. Sensuous, atmospheric slow jams like “The Best Ten Minutes of Your Life” and “New York Song” as well as a cookin’ cover of Jimmy Smith’s “Root Down (and Get It)” highlight Neto’s understated brilliance. Tone junkies of all stripes will have plenty to savor with antique tube amps, wah-wah pedals, Echoplexes and other vintage gear lending We Want Groove an authentic ‘70s vibe, the liner notes providing a list of equipment used for musos to salivate over. But unlike a lot of “all-star” get-togethers, this is about more than just flashy chops and expensive instruments: it’s about letting go of the ego and having a blast.

This becomes immediately apparent on the bonus “making of” DVD. Sporting a trucker hat, jeans and worn work boots, Bonamassa remarks that with Rock Candy Funk Party, “I don’t have to dress up in a suit and sunglasses and, you know, go out there and be that guy.” You get the sense that music is a job like any other and an opportunity to play just for the fun of it happens all too rarely. It is fascinating to watch them work out the arrangements, all together in one room, recording the takes live. And while the germs of a piece might start out fairly simple (a riff, some chords), you can witness its evolution: a melody stitched together, a key change at the bridge, maybe an added coda. The sheer joy in making this music is obvious on everyone’s faces. It’s also clear that this is Bergman’s project, his enthusiasm tempered with a timekeeper’s discipline. “Tal did a great job making sure the album didn’t become overindulgent,” Bonamassa says, and We Want Groove expertly balances an easygoing, impromptu approach with a smooth, polished finish. It’s as much fun to listen to as it obviously was to make. To top it off, there’s an old-fashioned “hidden track” at the end of the CD, a stomping version of Weldon Irvine’s “Mr. Clean” that will jolt you awake after four minutes of silence.

The operative word in Rock Candy Funk Party is candy. These guys went back to the meat and potatoes of their main jobs immediately after cutting this record. Although they played a CD release party at The Baked Potato in January, this is apparently just a one-off project. An unapologetic homage to ‘70s funk and jazz/rock fusion, We Want Groove is an hour of pure pleasure, a great party record. But if this is what the band can throw together in a week, imagine what they could do if they put some time into it—nah, that sounds too much like work. While candy is tasty and the sugar rush is a thrill, you can’t live on it. Rock Candy Funk Party is nothing but fun.