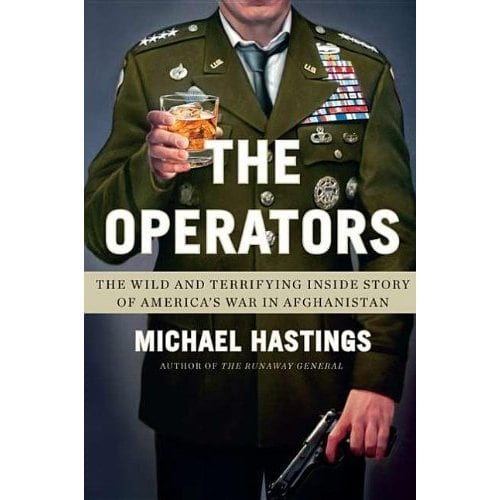 [xrr rating=3.75/5]If The Operators is a reliable barometer, then Michael Hastings, the 33 year old hotshot journalist who turned out the book from his own Rolling Stone profile of a hotshot general who was briefly in charge of the war in Afghanistan, is better at books than he is at magazine stories. But that’s probably because The Operators isn’t just the vast expansion that Hastings’ article deserved, it’s a coda to it, a feature-length explanation of how and why the article itself cost the general his job.

The story goes something like this: Hastings, a young journalist with the hip calling card of a Rolling Stone press pass (who was already the author of a book on the Iraq War, which centered around the murder of his fiancé in that country), was given inside access to General Stanley McChrystal’s publicity tour through Europe. The general deemed it politically expedient to try to shore up allies for his war with a whistle-stop tour of every country who’d supplied America with help in the Middle East after 9/11. While he was at it, the general figured he’d invite along a Rolling Stone writer, ostensibly to give the whole thing a nice hip sheen.

McChrystal had a somewhat bigger ego than Hastings was expecting, aided in no small part by his worshipful entourage, chock full of macho Navy SEALs, Army intelligence officers, Afghan special forces soldiers and civilian media spin doctors. The story Hastings initially published, in short form, was an account of an obscenity-laden military-style bacchanal, with drunken, vitriolic opinions on the Obama administration taking the place of actual orgies. Hastings even caught insults against Joe Biden coming directly from the mouth of the general. When the story went national it sparked the ire of everyone who got badmouthed, up to and including the president, who personally canned McChrystal and replaced him with General David Petraeus, who of course went on to go down in his own fiery flames.

Befitting its status as a dilated Rolling Stone article, The Operators is a terrifically entertaining read. If you’re at all up on the current literature of America’s misadventures in the Middle East, then you know it tends to be a dry, gloomy and often gory one. Hastings, in chronicling the downfall of one of the key architects of that misadventure, has tackled Afghanistan from a by-and-large bloodless angle that also happens to function as an accurate slice of what’s wrong with American foreign policy.

Hastings surrounds his account of the bacchanal with sincere portraits of on-the-ground life in the country McChrystal was charged with saving. One group of American infantry, after losing a buddy to an enemy (the Taliban) that McChrystal expressly forbade firing on (the general’s strategy of counterinsurgency called for working on the hearts and minds of the Afghan people, even if they were suspected fighters), wrote an email to McChrystal inviting him along on the same type of patrol that got their buddy killed. The general accepted, but treated the excursion as a chance to score political points, feeding the soldiers canned answers to sincere questions about the seemingly useless goals of their job in Afghanistan.

The link between the epic flub McChrystal made by running off his mouth in front of a journalist – a flub which got him fired – and the much more arrogant one of underestimating what it would take to turn the Afghanistan war around is made delicately enough by Hastings. He never fully takes credit for his article’s undoing of a powerful man, but the facts of Afghanistan’s disastrous mishandling mirror those of McChrystal’s ill-fated journey clearly enough.

Whether or not McChrystal’s ouster or the book itself will have any effect on Afghanistan, both are interesting pit stops in its history. Hastings is never less than an exciting writer, eager to be colloquial, zippy, profane, conversational and even experimental (he creates an entire chapter out of nothing but a long text exchange he had with McChrystal’s publicity chief). He renders the titular operators, McChrystal and his motley entourage, in punchy sentences that try to convey the quick, journalistic size-up that a hip civilian writer can give the military’s top brass if he’s able to get close enough. He favors sentences that purport to be exactly what he was thinking (he references one of his progenitors, the journalist Theodore White, in explaining his own fly-on-the-wall style), which over the course of his time with the operators moved from thoughts of being intimidated to epiphanies on how childishly a war could be run without anyone being the wiser. And despite his consistent dexterity with words, Hastings never fails to be self-deprecating when writing himself into the scenes on which he’s reporting (“Was I being disrespectful? Had I stepped over the line? What was my deal? Who is this kid?”). The real force of The Operators may be its demonstration of just how simple it is for a humble, smart writer to get under the skin and expose the hubris of some of the most powerful men in the world.