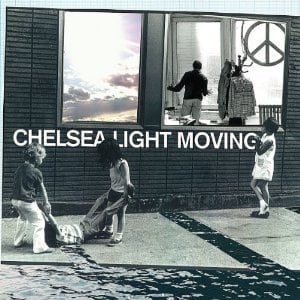 [xrr rating=3.25/5]With Sonic Youth on indefinite (perhaps permanent) hiatus, it’s encouraging to see guitarist Thurston Moore fronting a new band as an outlet for his goofily intellectual brand of post-punk rock music. Born out of a touring group assembled to promote his pastoral, semi-acoustic solo album Demolished Thoughts in 2011, bassist/violinist Samara Lubelski, second guitarist Keith Wood and drummer John Moloney gradually coalesced into a real band while on the road, becoming something more than just Moore’s backup. Ditching the acoustic instruments and dubbing themselves Chelsea Light Moving, they spent the next year and half working up the songs that appear on their self-titled debut. Although this is still Moore’s show, Chelsea Light Moving sounds like a genuine group effort. It’s not Sonic Youth, but close enough.

The name comes from an actual removal company owned by composers Philip Glass and Steve Reich before they became famous and that is just one of many literary and musical references scattered throughout the album. Moore has always had a penchant for such brainy wordplay, but unshackled from his former band, he lets it all hang out on Chelsea Light Moving. Titles like “Burroughs” and “Frank O’Hara Hit” are obvious homages while “Groovy & Linda” refers to the 1967 murders of James “Groovy” Hutchinson and Linda Fitzpatrick in New York City’s East Village, an event that came to symbolize the death of the ‘60s in the Downtown art scene. Spotting the obscure allusions on Chelsea Light Moving could be a fun parlor game for know-it-all hipsters and other cultural gadflies. “Mohawk” goes even further into the realm of arty pretention, with Moore reciting faux-beat poetry in his most stentorian tone while the band skitters and drones underneath, like a ghost of the Velvet Underground. It’s all a little much, but the earnest delivery is endearing enough to make it enjoyable.

Moore’s lamentations for the lost eras of beatnik, hippies and hardcore punk is reflected in the music, its stripped down aesthetic closer to Psychic Hearts, his 1995 solo album, than to anything he has done since. And if you think you’ve heard most of these riffs and chord progressions before, you probably have. But he sounds energized by his new team and otherwise derivative tracks like “Sleeping Where I Fall,” “Empires of Time” and “Lip” allow the band to cut loose during the squalling, mid-song raveups. Most interesting are the heavy metal touches which creep into “Burroughs” and made much more overt on “Alighted,” with its brooding chord progression and ferocious walls of noise. Moore’s collaboration with black metal supergroup Twilight has obviously paid some dividends, resulting in a fresh edge to some well-worn material. Musically speaking, this is as dissonant and skronky as anything Moore has committed to disc in recent years—and that’s a good thing.

Record collector geeks will note that the vinyl edition shunts “Heavenmetal” and “Communist Eyes” off to a separate seven-inch single, a decision which at first seems odd. However, the quiet, contemplative opening track sounds like it picks up where Demolished Thoughts left off, only strumming electric guitars. While “Heavenmetal” is a plaintive and pleasing song (with a great title), the abrasive rock of the following “Sleeping Where I Fall” comes as something of a shock. Similarly, the Germs cover is faithful and suitably intense, but feels tacked onto the end of the album as a sort of “bonus” track. Accordingly, the LP is a very different listening experience, more focused and consistent. Given that Moore is himself one of the biggest record collector geeks on the planet, this reconfiguration is no doubt intentional. Either way, Chelsea Light Moving is a charmingly self-indulgent record. Long-time Sonic Youth fans will feel right at home.