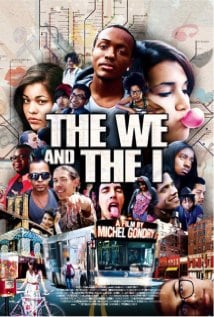 Michel Gondry’s The We and the I, which follows a gaggle of Bronx students riding home on the last day of school, plays like a cross between Dazed and Confused and The Lord of the Flies. In a typical Gondry flourish of lo-fi creativity, he sets the stage for the initial pandemonium by following a toy recreation of the bus made out of a stereo. Its spinning tape reels double as the mechanical gears that propel the miniature as it blares Young MC’s “Bust a Move.” The myopic focus on this contraption as it zooms along sidewalks, as well as its loud music, scales up when a real bus runs it over as it heads out of the school, transferring and magnifying its intimacy and cacophony.

The first act lives up to its title of “The Bullies,” though the camera’s initial focus on a few rabble-rousers at the back of the bus soon gives way to a view of the entire bus full of kids engaging in cruel acts of their own. Gondry divides people into the usual types—nerds, brooding music types, alpha males, the cool girls—but has them all acting out in the same fashion. And boy can these kids be awful; anyone who stands out for any reason is mercilessly targeted by the mob, and the targets of bullying pass on the hostility visited upon them. This includes those who are not students, such as an old white woman who suffers through crude, sexual japes at the hands of some of the cockier boys before getting off at her stop with a parting racist remark.

Gondry reveals a pack mentality that overrides individuality and even typing in the teenagers, which may be a fair assessment of contemporary youth behavior but stunts an already confined narrative. Because these kids are so faceless when placed with each other, the film can do nothing but ricochet between pockets of minimally fleshed-out characters uniformly depicted as aggressors. More troublesome is Gondry’s tendency to play their misdeeds as comedy. A guitar smash cannot help but recall Animal House, but in a film so rooted in the ostensibly real milieu of these nonprofessionals, one wonders how this inner-city kid is supposed to scrounge up the cash to replace his instrument. Likewise, the ping-pong deflection of shame spread about characters’ sexual exploits is all laughs until, Hot Potato style, someone gets stuck with no one else to slam and becomes the de facto object of pity.

At times, The We and the I comes close to the fly-on-the-wall view of American youth it seeks to be. A viral video of a classmate’s tumble morphs into a sly visualization of new technologies turning individuals into a collective as it passes among contacts who pass it along to their contacts. But if this kind communal unspoken communication makes the perfunctory split of nerds, bullies and the like meaningless, it also makes for a hive mind that allows for no individuality. Where a filmmaker like Richard Linklater gradually reveals the people underneath their surface-level types and finds a world within his populous microcosms, Gondry cannot begin to dig into anyone until he starts expelling most of the characters off the bus. What’s more, those who remain cannot shake off their anonymity. The closest thing to a stand-out, Michael (Michael Brodie), attempts to have a personal moment with only a few students left to hear him, but his shift from an angry, mocking pack leader to a sincere young man looking to make a real friend is so sudden and random that even the witnesses to this confession mock its triviality.

Gondry’s camera is left to engage the audience in any way, which it admittedly does when Gondry employs some of his patented moves. He places two scenes, be they in different locations or a contrast of reality and fantasy, within the same frame, as if a whole other world existed right outside the bus windows. One particularly tall tale concocted on the spot to impress some girls is reflected in cutaways that often reset with a jump cut as some detail changes in the improv and necessitates an on-screen revision. Fun as such a scene is, however, it illustrates the lack of any genuine character depth on display, loading all of the entertainment into asides instead of the main current of interactions and revelations. The film’s title suggests a globally connected world in which the principle conflict of humanity is no longer “us” versus “them” but the collective versus the individual. And if this movie is any indication, the I is already waging a losing battle.