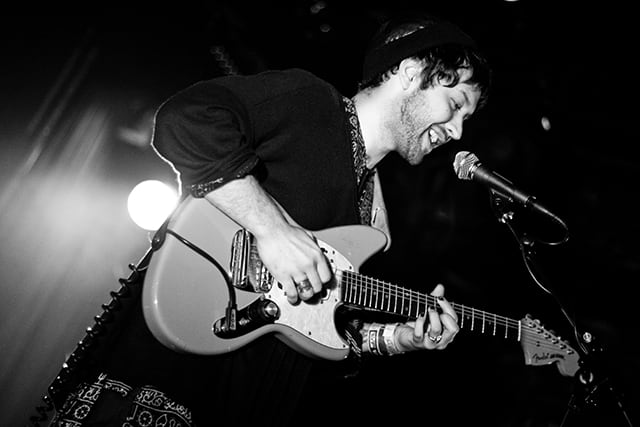 It’s a rare feeling to walk into a triple-bill rock show excited about all three acts. I’ve trudged through plenty of lackluster opening sets only to get to the band I actually wanted to hear. The Unknown Mortal Orchestra/Foxygen/Wampire show at Chicago’s Lincoln Hall was a notable exception. There’s a consistency between the sonic aesthetics of the three groups, even though they are at different stages in their respective careers.

The Portland-based Wampire came out on stage at 9:00 p.m. sharp, donning sunglasses and launching into a drunken and/or high version of “The Star-Spangled Banner” as an intro. A video screen above the band played a loop of a pizza continually spinning, as if to tease the stoners in the crowd. While the hall was not filled to capacity at the start of Wampire’s show, folks spilled into the performance space from the bar as the opening set went on. The quintet established an eerie yet celebratory vibe, setting the tone for the night with their dance-y, organ-laden gothic surf music. The band’s two lead vocalists often creepily sang the angular melodies together in unison. After about 30 minutes of playing tunes from the group’s forthcoming record – and throwing in a Bowie cover for good measure – Wampire ended with single “The Hearse,” and the crowd moved about to its danceable grooves. The band’s high-energy, smoothly-executed performance suggests that their debut record, Curiosity, produced by Unknown Mortal Orchestra’s Jake Portrait, will be a big success when it is released in May.

While Foxygen’s recent LP We Are the 21st Century Ambassadors of Peace & Magic is gentle and unassuming most of the time, the group’s live set was fierce and pleasantly baffling, a mixture of flower-power aesthetics, punk-rock attitude and avant-garde performance art. Lead singer Sam France adopted multiple personas, alternating between a charismatic preacher speaking in tongues, a psychotic, drugged-out hippie walking paranoid through the streets of an unknown city and a mechanical robot programmed to move his arms in straight up-and-down motions while singing a tender love ballad (and these were all on the same tune). At one point during an extended jam, France yelled out, “Fuck it!” before the band launched immediately into another song. In contrast to the sleek, refined production style of their record, the five-piece group’s show was a little sloppy. While this approach fit the more psychedelic extended jams such as “Bowling Trophies” and “Shuggie,” I would have preferred more pop-oriented tunes like “San Francisco” to have a bit more refinement. Sam France and Jonathan Rado originally conceived of Foxygen as a studio project, and they are relatively new to touring. They will figure out all of the nuances of their live show in time. Not only are they on the right track, they are already far more interesting than plenty of bands that have been touring for years.

Unknown Mortal Orchestra has improved immensely since I saw them a couple years ago at Chicago’s Empty Bottle. I remember how lead singer Ruban Nielson’s vocal chops were shot at that previous show, and he was unable to execute some of the high falsettos that characterize the band’s work. This time, his vocals soared higher than ever. His guitar playing has become even more intricate and smooth, with his weird, off-kilter riffs making each tune memorable. New drummer Riley Geare and bassist Jake Portrait didn’t just provide support for Neilson’s guitar playing, but contributed bass lines and grooves that became as much an identifiable part of the tunes as Nielson’s lead licks.

It’s remarkable how much power and sound this rock trio was able to project. The group came out of the gate running with “No Need for a Leader,” the dirtiest, rockiest track from new record II. As the fuzz came wafting from Lincoln Hall’s excellent speaker system, it became clear that the band has pushed beyond its indie psych-pop moniker to something more aggressive and, ultimately, deeper. Unconventionally, the group performed several of their most well-known songs – “No Need for a Leader,” “Swim and Sleep (Like a Shark),” “Thought Ballune” and “How Can You Luv Me” – in the first half of the set. The latter culminated in an extended, yet never boring, jam. The set struck a mellower tone near the end, with “Monki” and “So Good at Being at Trouble” revealing the soulful versatility of Nielson’s voice. An encore of Jay Reatard song “My Shadow” and fan favorite “Ffunny Ffriends” rocked the audience back into submission. The set showed once and for all why Unknown Mortal Orchestra aren’t so unknown anymore.