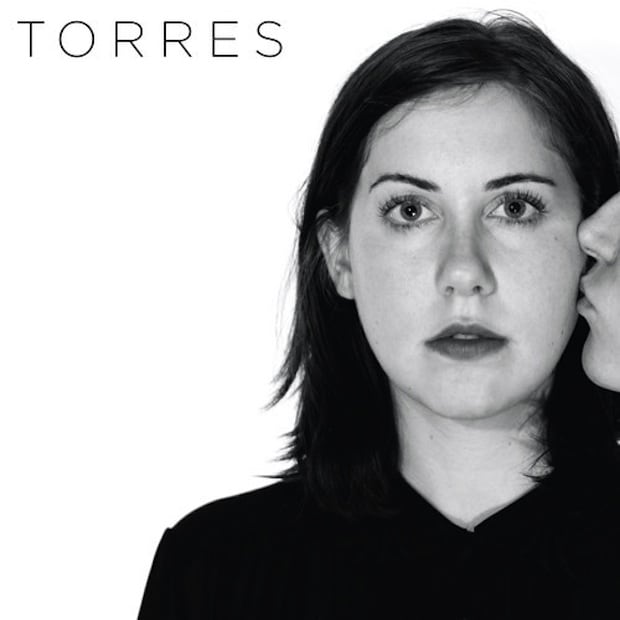 [xrr rating=3.75/5]The debut album from Torres is a clandestine attack on your indie-throwback, folksy rock and roll, twee girl pop favorites of recent years, yet it is impeccably well-timed. Righteous, pissed-off women with guitars are ascendant! PJ Harvey, EMA, St. Vincent and Cat Power have released acclaimed albums in just the past two years. Even Adele and Florence + the Machine tap the bountiful springs of discontent. Though it’s certainly not a format exclusive to women, and perhaps because being emotional is coded as feminine, women have been the champions of melodrama in all genres. As Torres, Nashville’s Mackenzie Scott is its next rising star.

Just 22 years old, Scott is already a haunt, a specter that drifts through your peripheral vision, runs chilling fingers up your spine and howls in your ear. Her youth is nearly immaterial though, for her voice is ageless and her relationship to birth and death somehow feels both immediate and objective. On “Moon & Back,” she drapes herself in violins and casts herself as a woman reaching out to the child she gave up for adoption. “Waterfall” uses the water feature as a way to talk about suicide. Neither seems to be fully about Scott, yet they’re performed with the anguish of someone who’s lived through both.

Rightfully, “Honey” garnered Internet-wide acclaim earlier this year and should make many best-of lists for 2013. The lyrics seethe over a roiling guitar riff−first passive then accusatory, whispered then screamed−suggesting at least Betty Friedan’s “problem that has no name” and, at worst, outright violation or betrayal. Resentment builds slowly from the first singsong delivery of the chorus to its plate-smashing, table-flipping peak: “Honey, while you were ashing in your coffee/ I was thinking about telling you what you’ve done to me.” May age never dull Scott’s acute sense of drama.

Following in quick succession, “Jealousy and I” and “November Baby” showcase Scott’s pointed lyrics and talent for a devastating wail. Whether quavering, “Jealousy and I, we’re two of a kind/ And she’s all mine” or “This skin hangs on me like a lamp shade/ keeping all my light at bay,” she revels in the light morbidity of her characters. They’re obsessive and fearful, working through difficulties that Scott clearly delights in exploring. The songs strike us by suggesting that we truly are all the worst things we fear ourselves to be.

But let’s talk about that ferocious guitar. “When Winter’s Over” opens with a Dinosaur Jr.-style wall of it, unveiling Scott’s ablest hooks of the album and only barely leaning on that dusty winter metaphor. Because of its bounce, and its sing-able melody, the track verges on not fitting in. Fortunately, by this point Scott has cast a wide net with her experimental orchestration. What began as a voice-and-guitar outfit has spread its arms and grabbed everything in the room for a take. Yes, those molten cords get billing just below Scott’s melancholic voice, but the flourishes make them both pop. Opener “Mother Earth, Father Time” is bound tight by harmonies and a few strings. “Chains” creeps along with just bass and a few trills. Scott keeps her instrumentation spare but her ground is nonetheless fertile.

Only on “Come to Terms” does Scott return to her acoustic guitar, singing in a sweeter tone to match the steel-stringed instrument. Just a few notches above a bedroom demo, the raw performance sidles up to the open mic at a coffee shop before giving a blowout performance to an inattentive crowd. Like “When Winter’s Over,” the track could easily feel out of place if not for consistent production and the artist’s bold claim over a wide swath of musical territory. The appropriate reaction is “What are you doing here? I’m glad you came.”

Everything Torres tries on this debut is done at least capably (often devastatingly) well. Perhaps the greatest injustice is that Mackenzie Scott has so much capacity to grow. Such early, unexpected success can stifle a talent this fresh. As a piece of art, her debut is frank, honest and beautiful. Yet it lacks a resolution. Scott has penned a gripping story that she doesn’t quite conclude. I know she’ll be able to finish it next time around if we let her.