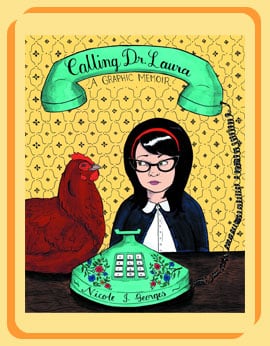 [xrr rating=3.25/5]Some books may not be the heaviest loads you’ve ever carried. They may not wrestle through your soul’s fiber to become a permanent part of your psyche’s fabric, but they charm and entertain you with every page. This is the delight that Nicole Georges creates in Calling Dr. Laura: A Graphic Memoir. The book is light without being frothy—the gelato of narrative nonfiction.

Georges’ memoir follows two unexpectedly parallel trajectories: her relationship with her girlfriend, Radar, commencing as she painfully conceals her sexuality from her mother, and the true story of her long-departed biological father. Georges grew up believing that her dad was a bank-robbing con man, the narrative provided by her mom and backed up by immediate family members. She didn’t think to question the family history until Radar treated her to an authentic Portland palm reading. In between sensing the animosity from Georges’ mother and promising a long and healthy life ahead, the fortune teller remarked that the father was “very much alive.” The graphic memoir traces the next year of Georges’ life during which she carries secrets and slowly cracks out of her childhood armor, culminating with a fateful phone call for advice from Dr. Laura herself.

As a graphic memoir with coming out themes, it’s impossible not to draw a line of comparison with Alison Bechdel’s Fun Home. Both memoirs are written by LBGQ ‘zine creators and comic strip artists, and wrestle with messy, dysfunctional relationships with a parent. Since the books are blatantly visual, it’s simple to see the differences between the two writer/artists immediately. Bechdel’s Fun Home is drawn with excruciating detail. The figures have faces that tic with emotion, so vivid that you feel them moving through the panels. There is an almost anatomical attention to detail, as if Bechdel took a scalpel to her memory and spent years reconstructing accurate visuals on the page. The style Georges employs is more impressionistic, and becomes simpler as her story regresses into childhood flashbacks. The further back Georges’ memory reaches, the sparser the panels become. During her earliest memories the characters are little more than stick figures, with smiley and frowny faces wandering through empty voids and fuzzy rooms. The contemporary sections are rich with expression, though less complicated than Bechdel’s. Often she concentrates on one telling detail, like her Hello Kitty teacup alarm clock (I had the same one in 2004) to speak to the era, setting and personality of the characters.

The surface-level artistic approach is telling of how deep each memoir’s writing goes. While Georges does manage to tie the themes of lost dad, fractured mom, frayed relationship and personal growth together, the book doesn’t plumb too deeply for answers. We trace the origins of Georges’ behavior patterns back to the abusive men her mother used to date and the passive-aggressive circle of blame and gloss that she spun around with her mother. As a result, we can track the pieces falling away from her relationship with Radar and cheer her eventual pursuit of truth. I enjoyed reading, and loved the asides and joke-panels woven into the narrative, which were one of my favorite aspects of reading Japanese Manga as a kid. The story and art is witty and reverberates Georges’ love for her found-family, a menagerie of cats, dogs and chickens. Nevertheless, I wish I had gotten to know her a few layers darker—more reaction, especially in the story’s final climax, would have brought me away from the periphery. In many of the book’s situations the narrator-character felt so passive I wanted to shake her. Although her behavior may have seemed meek on the surface, I don’t believe that someone as bright as Georges doesn’t have more inner turmoil and inner ugliness a’brewing. For so many pages I wanted to claw her character open and learn more than the pretty illustrations would tell me.

As a premiere graphic memoir, Georges demonstrates that she has the skill to charm and draw us into her eccentric Portland universe. Perhaps on the next visit, we’ll stay a bit longer and see a brighter light cast onto what makes her tick.