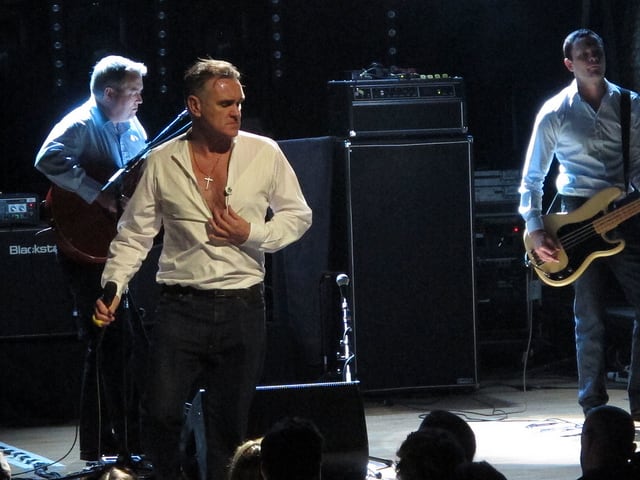 Ah, the life of a Morrissey fan. This past year has been particularly difficult for those investing in Moz concert tickets as a cavalcade of tragedies has revisited the former Smiths singer, rearing its ugly head in the form of maternal illness, a bleeding ulcer, Barrett’s esophagus (a pre-cancerous conditions for those too lazy to look it up) and now double pneumonia. On top of it, Morrissey’s militant vegetarianism has led to canceled television appearances and whiplash for food vendors at the Staples Center.

Luckily, Morrissey’s Portland show could happen between the first canceled November date and his most recent spate of postponements, allowing his fans to live out their Morrissey fantasies (albeit from the safety of their seats) for a 90-minute, 18-song set featuring music from his three decade career. The 53-year-old singer, still in prime shape and with a voice that hasn’t diminished, allowed fawning fans to grip his hand and pass on flowers and notes. At one point, he even gave them the microphone so they could verbally cast adoration before he gently mocked them for their lack of originality.

Pompadour still intact, shirt open down midway, Morrissey began the show with a spirited version of “Alma Matters,” a single from his 1997 effort Maladjusted. Though not as deeply loved as much of his Smiths and Bona Drag material, the song cast the tone for a setlist that included both deep cuts and well-worn hits. Flanked by a five-piece band sporting the same outfit, Morrissey stalked the stage where he strutted, fretted, leaned into the crowd and even took off his shirt and threw it into the audience.

Though his backing band may rock louder than the Smiths, Morrissey still is a man out of time, neither here nor there. He is without a record deal, free to do whatever he pleases. Whether he is admonishing the crowd about still being alive or rubbing our faces in a video of animal cruelty during “Meat is Murder,” Morrissey exists to do what he wants. It’s the plight of the put-out pop icon image he’s been cultivating since his early days, one that has grown more acceptable as he ages from rapscallion to curmudgeon.

He’s a man of contradictions, beyond the gay, not-gay, asexual speculation that has hounded him throughout his career. After the Portland show he apologized for the “extreme and silly” security, adding, “place an obese McDonald’s fry-girl into a venue security uniform and she is suddenly Eva Braun.” But when one fan complained about its extreme nature when handed the microphone, the guard standing next to me muttered, “He’s the one who made the rules.” That’s Morrissey, no qualms quarreling with the help.

But the man still gives the people what they want, including five Smiths songs, from the near the beginning (“The Boy with the Thorn in His Side”) to closing the main set (“Please, Please, Please Let Me Get What I Want”) to the encore (“Still Ill”). A Smiths reunion will never happen. It’s likely this could be Morrissey’s last tour. But it’s impossible for him to stop being Morrissey, feeding off the love of rabid fans while firmly planting a hand in their faces whilst turning away.