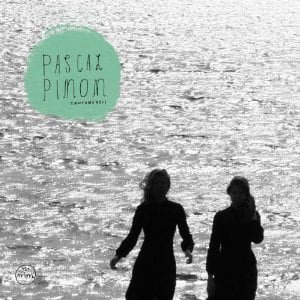 [xrr rating=4.0/5]The title of Pascal Pinon’s second album, Twosomeness, reflects more than just the change in line-up. At first a quartet, Kristin Ylfa Hólmgrimsdöttir and Halla Kristjánsdöttir have since erased their names from the project, leaving Pascal Pinon’s original members, twin sisters Jófríður and Ásthildur Ákadóttir, sole authors of this ice-pink dream. This seraphic collection of songs indeed sounds like something only teenage twins would be capable of producing, the melodies so disarming and intimate they seem like little secrets the girls have been humming to one another since childhood – music that’s been loosed from a cat’s cradle.

Twosomeness nestles into the conceit of an album that is populated by just two people – but in doing so they nurture another dyad, that of sender and receiver. To hear it properly, you don’t so much turn up the volume as approach the source: it doesn’t get big, so get small, if you please. The handmade minimalism here makes this work as artful and deliberate as a paper cut design. The Icelandic twins, composing their first songs at age 11 through their mother’s iBook, have since kept with demure instrumentation. The ephemeral tinklings of analog keyboards, glockenspiels and toy instruments are accented by the occasional puff of a bassoon or muffled thumps of a drum machine. The sounds frequently come across as characters themselves, the pedaling notes of a clarinet in “Bloom” outpace concurrent pushes of air through a harmonium like it’s a conversation during a gentleman’s footrace. Blithe opener “Ekki Vanmeta” is one of the few tunes that is percussively propelled, the snare voice sounding only a shade more tech-forward than thumbs beating on a right-sized cardboard box.

Producer Alex Somers lends his talent to Twosomeness, honoring the girls’ creations by treating the songs with finesse rather than unwanted amplification. Affiliated also with Nordic countrymen Sigur Rós, Somers is well equipped to express the humbleness of the otherworldly, and on Twosomeness he protects that quality as if holding an egg. Some of the more challenging effects perhaps bear his stamp, from the taffy-pull of sliding frequencies in “Annar Logi” to the surfacing of distressed electro-bubbles in chime and toy piano ballad “Sumarmál.” The presence of these odd whistles and burbles are fine companions to the sublime harmonies of the twins, and the interplay between the few compositional elements underlines Pascal Pinon’s ability to coax strangeness from simplicity.

Jófríður and Ásthildur sound no more or less than their 18 years, and the album achieves sincerity with an accommodation between innocence and awareness. Vocally, the sisters’ performances are lived-in and quieting, in “Þerney (One Thing),” one sister curlicuing into a soprano range reachable only by silk balloon. That half of the record is sung in Icelandic only refines its enchantment, and the English songs, the words foreign in their mouths, are relayed with a rolling diction that is untranslatably sweet. “Evgeny Kissin” is one of these, a wordplay love letter inspired by the Russian piano prodigy of the same name (“Evgeny Kissin/ On my cheek/ Say no more”). Introduced by tentative test-pitch hums and backed by a hushed chorale of angelic harmony, “Evgeny Kissin” is both lyrically clever and musically demonstrative of Pascal Pinon’s beguiling modesty.

It’s not quite right to say they sing in whispers, as that implies timidity, but nevertheless one leaves Twosomeness with the feeling that these songs have reached your ears through cupped hands and winsome hearts.