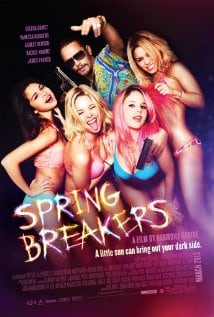 [xrr rating=4.25/5]You could call Spring Breakers a spiritual journey to the hedonistic mecca of Florida, a story of young corruption and love or just the fucked-up dream of some bored co-eds on acid—and you’d be correct on all counts. While the film is imbued with apparent realism, director Harmony Korine’s extreme stylistic dexterity here—an infusion of Michael Mann colours amped up several notches for the Day-Glo bikini costume design and accompanied by the rhythmic flashback tics of Steven Soderbergh’s The Limey—suggests at least theoretically a-dream-within-a-dream or meta-fictional quality. Yet these gestures are not without thematic gravitas; there is a slew of contradictory elements bursting from within the director’s fifth feature, namely its superficial glamorization of lewd behaviours and hubris, the shaping of characters’ experiences into a vicarious mediated one for the viewer, turning that escapist apparatus into a means of voyeurism and subsequent conflicting guilt and shame for the viewer, and doing that through an upfront mockery of such larger-than-life manic bacchanalia. “Just pretend it’s like a video game,” advises one of the girls to the others as they’re about to brazenly stick up a joint in ski masks, explicitly reminding the viewer that what they’re watching is indeed fictional. You can’t help but be simultaneously awed, flummoxed, giddy and slightly queasy from the movie. Spring Breakers is as likely to make you throw up as it will make you have an orgasm.

The film begins with a five-minute montage of hyper college kids on the beach going cray, not quite unlike YouTube videos of real spring breakers, but here the debauchery is cinematic, slo-mo and hyper-actualized. It’s also absolutely grotesque. Instead of imitating the simulations of or having real sex, these carousers engage simply in the performative crassness and lewdness of hardcore pornography, girls lasciviously giving blowjobs to popsicles, guys pretending to ejaculate from beer bottles onto semi-naked, sand-encrusted, hip-gyrating beach girls lying beneath them. It initially feels like Korine is celebrating such abhorrence, but the next 90 minutes makes up for that understandable, yet erroneous judgment.

Spring Breakers is about four young women named Faith (Selena Gomez), Brit (Ashley Benson), Cotty (Rachel Korine) and Candy (Vanessa Hudgens), bored co-eds who would do anything to visit Florida for their weeklong break. Dramatically complaining about their lack of funds, the three naughtier girls—Brit, Cotty and Candy—steal a professor’s car to rob a store, the first of many signs that these girls aren’t afraid of shit. In Florida they revel naturally in their freewheeling licentiousness, until a random drug bust leads to their incarceration, changing their setting from sun-drenched beaches to the blue-tinted harshness of reality inside a police station. Magically, a corn-rowed local drug dealer named Alien (James Franco, in his best and most entertaining role) bails out the girls.

This is when the narrative begins to make certain dramatic turns that are so beautifully structured it’s as if Korine isn’t just toying with our expectations of this being supposedly escapist fare, but also messing with our sense of convention in an alleged drama about the inevitable corruption of young impressionable girls. Faith feels threatened by and is suspicious of the drug dealer’s no-strings-attached gesture, but in all honesty Alien is who he says he is—the guy ends up falling in love with the girls later in the film because of their tough-girl recklessness—and he never does anything to harm them, nor does he expect anything in return for his Southern hospitality. Faith, who is the most innocent of the four and whose name glibly describes her religious personality, exits the stage at this point. Cotty leaves not too long thereafter, when she is injured after Alien’s rival Archie (Gucci Mane) shoots up his car. This leaves the baddest of the bitches—Brit and Candy—to help Alien take out Archie. Without ruining the finale, it’s a resplendent and reflective turn of events, made all the more so by the girls’ ironic but still-candid voiceover narration, which echoes the sentiments of the previous narrators, Faith and Alien. Faith spends the first half of the film describing the spiritual, life-changing experience of Spring Break, explaining in a diary-like confession to her grandmother how she “found herself” in Florida. When Alien gracefully takes over the narration, it’s as if nothing has changed—”Spring breeeaaak, foreeevah, y’all” he intones in his slow, self-amused drawl, describing in earnest his love for his bitches. By the time Brit and Candy take over, their omnipotent positions and reiterations of finding themselves, being the best they can be, is a lot more resonant than just pure irony. The film intends such personal revelations to hold real significance—the blood they’ve shed, the guns they’ve fired, the money they’ve stolen, all this corruption has changed them, and in their eyes it’s for the better.

Yet Spring Breakers does not argue that debauchery and criminality is actually for the better—indeed, the film is actively and explicitly goading the viewer into feeling complicit from taking so much pleasure out of the characters’ hedonism, as cloaked as it is in spring-breaking fun and negligent mirth. Alien/Franco’s astronomically enthralling improvised “look at all my shit” scene, with its bevy of quotable one-liners (“Just look at this shit!”, “I got Scarface on repeat! Constant, y’all!”, “I got shorts in every color!”) as he demonstrates his firearm and blood-money wealth to the girls, in addition to their touching, beautiful rendition of Britney Spears’ “Everytime,” is treated with as much irreverence as reverence, almost as if stoically acknowledging that such pop culture is our culture, as lowbrow as it may be. Spring Breakers is not about trash, hedonism or camp, though certain artistic decisions may give that impression, and less-intelligent viewers will most certainly see it as carnal, cinematic self-indulgence. Such celebratory gestures are only the surface level of a deeper critique of our wanton need to cheer on the devil within all of us and to acquiesce to the immense, self-gratification in its virtual glorification and embodiment.