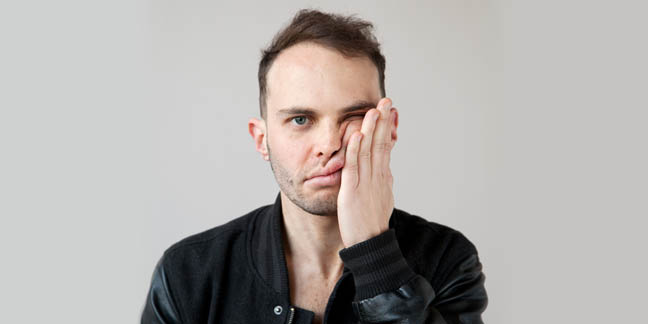 After his show at Portland’s Bunk Bar, Autre Ne Veut’s Arthur Ashin admitted to me that he would love to tour with a six-piece band. We stood outside the venue, Ashin smoking a cigarette on a warm March night, the densely packed crowd already dispersed into the darkness. It makes sense, the six-piece, for Ashin’s songs to reach full realization in the live setting.

Have you ever been to a show where the venue is just completely wrong for the act? Just take a listen to Autre Ne Veut’s hot new record Anxiety and imagine the perfect setting. A dark club, some smoke, one brash light shining down as a sweating Ashin emotes his twisted R&B mashed up with electronica songs. Unfortunately, this was not case in Portland that night.

For the unhip (I say this with tongue in cheek), Bunk Bar sprang up from a popular Portland sandwich place, a convergence where people can drink, eat said famous sandwiches and watch a show. More thought has gone into the décor than the stage and it took at least 30 minutes of Ashin’s set to elapse before someone even thought to dim the lights. I don’t really want to see the person next me while enjoying songs such as “Play by Play” and “World War.” It is also nearly impossible to see anything as the stage is almost level with the floor and some mighty big poles take up valuable standing room.

Logistics aside, the short set was quite excellent. Backed by a drummer and keyboardist, Ashin was free to sing his damned ass off. It’s like the Weeknd without all the mysterious bullshit and homespun mythology. But unlike bedroom peers Toro y Moi and Neon Indian, Ashin writes big, infectious songs, ones that stick with you long after hearing them.

Wearing a backwards baseball cap, Ashin definitely has stage presence. He played most of Anxiety, unafraid to show exuberance and emotion in his performance. Ashin gave his falsetto range a workout during “Warning” and finally got people to shut up and dance with a showstopper version of “Counting.” That’s the problem with having a bar that runs one side of your venue: people rarely shut the fuck up.

So I am hoping that Autre Ne Veut comes back soon. That Ashin gets that six-piece band and that we can meet again outside of a venue much more appropriate for his intimate and exciting music. Case in point: one dude stood outside the Bunk Bar for the entirety of the performance, watching from the window next to the stage. He had the best seat in the house and didn’t even have to pay admission. Hopefully, he ducked inside and bought a CD before the night was over.