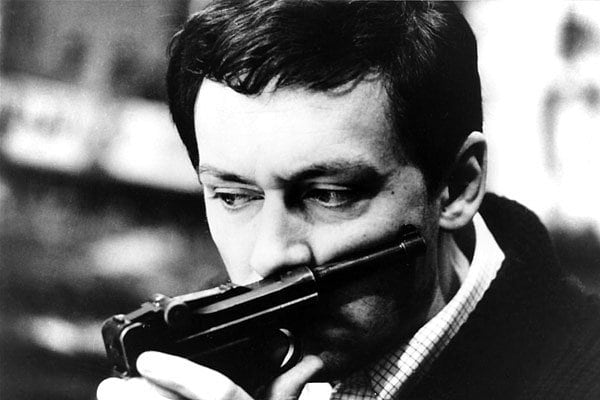 Let’s start off with some stereotypes. The French: verbose, animated, tactless, as fixated on weighty questions of art and philosophy as on the specifics of a post-meal cheese course. Norwegians: taciturn, reserved, emotionally sluggish, more likely to let problems fester than to risk causing a fuss. These are reductive perspectives, but like all stereotypes they have roots somewhere, and can be loosely useful in outlining the basics of a generalized national character. This in turn can help in pinpointing the kind of attitudes that separate two different versions of a source novel (Pierre Drieu La Rochelle’s Le Feu Follet), filmed 46 years apart, with very little in common beyond their shared literary heritage. 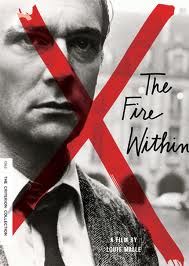 Published in 1931, Drieu La Rochelle’s story of the final day of a depressive recovering alcoholic was written in French, which gives Louis Malle’s 1963 original the home-field advantage. Using that last day as an extended emotional crucible, The Fire Within tosses Alain Leroy (Maurice Ronet) into a series of social scenarios, each offering him the chance to see if he can still feel something. These episodes are loose and discursive, with discussions about Alain’s mental state and past sins incorporated into broader topical debates. The character is upfront about his depression, and goes as far as to mention suicide several times, but these references never break the flow of the discussion; no one considers his issues beyond a theoretical level. For this intellectual crowd, the topic of whether life is worth living is simply another issue for deliberation, a subject that , in the sort of verbal gamesmanship familiar from Eric Rohmer’s films from this period, causes the focus of the discussion to get muddied by a torrent of words.

In Joachim Trier’s recent Oslo, August 31 the same scenario is reimagined in a much quieter context. The 2011 film is still full of talk, but it isn’t as free-flowing and not nearly as sprawling, mostly concerned with people’s attempts to draw out a friend who seems to have become a shell of what he was once was. Anders Danielsen Lie’s Anders leaves a stint in drug rehab feeling closed-off and uncommunicative, and while these qualities align with a proud Scandinavian tradition of stoical silence, they’re also indicative of another primary disparity between the two films, one that’s as essential as any national distinctions: the difference between alcohol and heroin. Both are depressants, but alcohol is used to foment social contact, to draw the drinker outside of themselves, to foster some messy union with a great pool of communal feeling. Heroin sucks the user inward, drawing all of reality into one concentrated glimmer of gratification, which is enjoyed in a private vacuum. 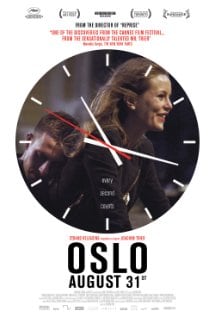 The marked stylistic difference between the two films seems to stem from this central divergence. Shot in digital, with a mixture of handheld shots and neatly framed portraiture, Oslo strives for an intimate form of realism, following the recovering addict as he ambles from one appointment to another. Embarking on the type of forgiveness-seeking journey that might cap off a 12-step program, he makes these visits with hunched, diffident remorse, making his amends while offering tacit, unspoken goodbyes. This process is one that you could see reasonably occurring in real life, the kind of farewell tour someone might take on if they were planning to end it all, maybe with the implicit hope that someone will say something to bring them back from the edge.

Malle’s film is much more an evocation of the feeling of hopeless dismay than a documentary recreation of its realities. Things flow much more abstrusely, and the narrative often seems to be operating just outside the functional limits of reality; at its most extreme it feels like the dream of a dying man, his consciousness floating off into the ether, reaching back down to the earth he’s leaving behind. The climactic party scene, unlike the cramped house party featured in Oslo, feels like something out of Bunuel, staged in a baroque, antique-laden mansion, its stuffiness representing the remote exclusivity of a world to which Alain cannot relate. Other settings are chosen for their representational capacities; the most commonly repeating one is a coffeehouse, a place where Alain’s friends and acquaintances gather, leaving him open to all manners of prying questions and inquiring eyes.

This brings things around to another marked difference between the two films. Trier’s version opens with an introduction that isn’t featured in The Fire Within, where Anders makes a half-hearted attempt at drowning himself. Following that initial scene, Oslo becomes the story of a man unsuccessfully trying to do something, reviewing the circumstances that led him to that decision, then gradually building up the courage to do it successfully. The action inherent in the film is not about building will-he-or-won’t-he tension, it’s the few short breaths that preface an authentic attempt at self-obliteration, the few steps backward that precede the leap.

Malle’s protagonist isn’t as hopeless. His inability to feel is a fresh wound, and the film draws its tension from watching him poke it again and again, trying to incite some emotion. His visits aren’t intended as farewells, they’re stages for the aforementioned arguments and for the rehashing of old incidents, aggressive attempts to provoke a reaction. Alain may be arguing for the side of death and hopelessness, but his ultimate goal is to be proven wrong. He never is, and that failure draws him to a lonely conclusion. His method is a shot in the heart, one which doubles as a final attempt to jump start the faulty organ, a final burst of sensation on par with Anders’ fatal dose. In both cases the outcome is the same, but the route taken to get there makes for two films with little else in common, a testament to the the manifold possibilities within the simple act of adaptation.