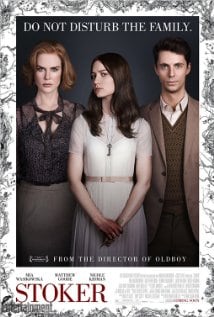 [xrr rating=2.25/5]Park Chan-wook has already entered the pantheon of fanboy-approved directors with his 2003 film Oldboy, a mindbender of startling violence, filling out the top 10 lists of those who populate those sorts of things with the work of Quentin Tarantino, Bryan Singer and Christopher Nolan. Park’s wham-bam direction and fondness for ultra-violence were no shock to those familiar with the other films in the director’s Vengeance trilogy but to the uninitiated those tendencies helped nose Oldboy into the realm of adoration that is smeared upon Reservoir Dogs and The Usual Suspects.

With newest feature Stoker, Park tries his hand at an English-language film but with mixed results. Gone is the bravura of Oldboy, replaced by a staid, vapid story gussied up in Park’s frenetic direction. So while it may be beautiful to see a crimson splash of arterial spray upon white flowers, artifice can’t replace emptiness. And that’s exactly what you get with Stoker.

India Stoker (Mia Wasikowska) is a morbid outcast who employs her extra sensory perception on hunting trips with her doting father. Ridiculed at school and under the tutelage of an overbearing mother Evelyn (Nicole Kidman), India is a 21st incarnation of Carrie White, a burgeoning teenager ready to blossom into her sexual own and come to grips with the dark passenger that resides in her blood. It is after her father is killed in a freak accident and the arrival of estranged and creepy Uncle Charlie (Matthew Goode) that India realizes that killing gets her off: literally and figuratively.

Critics have already dismissed Stoker as the stylized kissing cousin of Dexter Morgan’s origin story and it’s hard to deny the similarities. India even imagines her dead father as she stalks a victim. But Park and screenwriter Wentworth Miller seem to believe that they are more indebted to a certain Victorian horror novelist than Jeff Lindsay, as they attempt to craft a feeling of horror in India’s cloistered, rich existence more akin to uptight milieu of Dracula than the fast and free Miami of television’s Dexter.

But what does it all mean? Park tries to disguise this empty tale with pretense and sharp direction. But rather than bolster his film, it feels more akin to polishing up a turd, weakening the good work of Wasikowska, Kidman and Goode. It all feels very bombastic and forced and though Park has never been a subtle director, his attempt at subtlety in Stoker could be his first bona fide failure.

At its worst, Stoker is an art-house film too in love with itself, squeezing faux depth out of its vacuous premise. We see a spider scurry up India’s legs. Long shots of the family’s secluded New England mansion or its meticulous grounds are supposed to create an atmosphere of dread, a prison of luxury. The actors often stare blankly off into the distance, bored within their own tale. But don’t buy into Park’s empty-headed premise. This is not the stomping grounds of Shelley and Uncle Charlie is no Byronic prince coming to rescue India from the ennui of her life. It is nothing more than a good looking trifle, one that is easily forgotten even after its unsettling final act comes to a close.