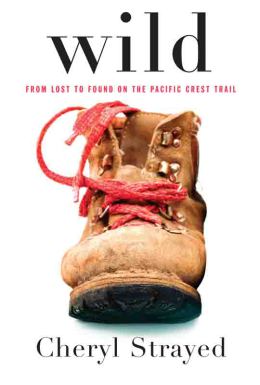 [xrr rating=4.0/5]Cheryl Strayed is the only girl in the woods. She is a badass motherfucking Amazon. She is the Queen of the Pacific Crest Trail. Cheryl Strayed once shot a horse. Many a memoir has risked devolving into folklore, edged perhaps a bit too close to the boundaries of fiction, strained our disbelief to its breaking point. Utter improbability actually happening is a large part of the delight in a particularly great retelling (and the reason for such vehement backlash when memoirs are revealed to have been falsified). So I hope and believe that writer Strayed is as she portrays herself in her own powerful wilderness memoir, Wild: From Lost to Found on the Pacific Crest Trail. In the bestseller, Strayed reflects on the Herculean trials she faced as a young woman growing up in Minnesota and then hiking from the Mojave Desert to the Oregon-Washington border. In the course of these miles, she becomes mythological, a titan, heroic for refusing to be laid low by inexperience, naïveté or lack of preparation. With vivid memories and the illuminating glow of hindsight, she returns to the PCT to relive her hardening, formative weeks.

We join Strayed somewhere in northern California in 1995 as she watches her battered hiking boots tumble down the side of a mountain. Though they were too small and had blistered and bruised her feet for hundreds of miles, their loss seems like the end of her trip, the killing blow after an as-yet-untold, month-long barrage. The ill-fitting boots had become heavy with symbolism as she describes how she came to be atop a mountain in the Golden State, how she became—as one tactless journalist called her—“an actual stray,” where she had been and where she would go, and how she developed the fortitude to keep hiking, barefoot and alone, into the unknown.

From this opening, Strayed retreats into the past, revealing it and her present slowly from campsites from the Sierra Nevada to the Cascades. As a senior in college, she lost her mother to an aggressive form of cancer. Her family—once tightly bound by their own desperate, rural poverty—scatters in grief. Shattered and alone, she spends four years wandering, waitressing, dabbling in adultery and intravenous drugs. Eventually, with that romantic mid-20s ideation of finding or repairing or losing herself, Strayed set out to hike.

With just a few words, Strayed has the power to review years of her childhood or the details of a feather. She’ll chill you in the snow and make you broil with her in the desert, break your heart and inspire you to try something big, terrifying and sure to fail. You’ll cry over and over, but by Crater Lake you’ll think you’re living through Strayed’s own catharsis. She reveres the trail, humbles herself before a foe that literally and repeatedly brought her to her knees. That someone as admittedly unprepared, over-packed and lucky could complete such a hike is so inspiring, the book should come with a warning. Warning: contents may shift your expectations of yourself.

The greatest lesson to be learned from Wild, as Strayed learned from the Pacific Crest Trail, is how we keep going. She admits that it’s not always strength that impels us (though greater strength may be an outcome). We keep going because we’re stubborn. We keep going because we don’t know any better. We keep going because to turn back would be a greater defeat (worse, a self-imposed one) than to go forward and be felled by outside forces. Wild is a remarkable story, told with wit, hope and honesty. It’s an aptly timed savior of memoirs in an era of fictionalized reality. It is brave and frank and in all ways expresses the best characteristics of a life well-lived.

[xrr rating=3.75/5]The debut album from Torres is a clandestine attack on your indie-throw…