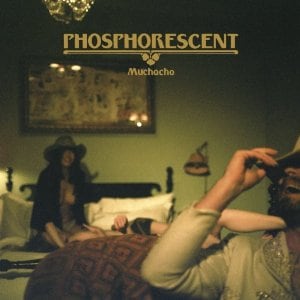 [xrr rating=4.0/5]Despite his luminous stage name, singer-songwriter Matthew Houck has made a decade-long career out of toeing the line between wistful lament and full-on sad bastard music. As Phosphorescent, Houck has carved out his niche through moody arrangements of strings and synths, of jangling tambourines, organ washes or whatever else best suits the mournful atmosphere he wishes to create. But above all, the music exists to prop up Houck’s fragile, often pained voice–his most moving instrument. For the most part, Phosphorescent has put out music that best accompanies crying into your beer during closing time at a hole in the wall while coming to grips with the fact that there’s no longer anyone waiting for you at home.

Through his first three albums in the mid-2000s, Houck stuck to a similar formula, although 2007’s Pride, his first release under the Dead Oceans label, did take his music in an even earthier direction. But 2009’s full-length Willie Nelson tribute, To Willie, seemed to shift his focus, as the country-western infusion would carry over to 2010’s Here’s to Taking It Easy, a more upbeat endeavor than most of what he’d done before. New release Muchacho is a continuation of that progression, one that sees Houck awaking from a daze and embracing both pleasure and pain. The yearning that has defined his voice breaks through to fleeting moments of transcendence, as though the dark clouds have finally parted and beams of sunlight are at long last warming his shaggy-bearded face.

In fact, Muchacho is literally bookended by nearly identical songs about the rising sun. “Sun Arise! (An Invocation, An Introduction)” opens with cascading keys, an echoing synth beat and gorgeous choral harmonies that sound like a rural clan of forest-dwelling pagans exalting celestial bodies. “Song for Zula” employs a bass pulse and tender violin as Houck stretches his voice thin to slowly intone the opening lines from Johnny Cash’s “Ring of Fire” before bestowing the hard-earned wisdom, “Oh but I know love, as a caging thing/ Just a killer come to call from some awful dream.” The song also invokes more nature imagery (streams, desert plains, treetops, soil and sand) and for those who may be unfamiliar with Phosphorescent, it’s clear early on that he’s a weathered romantic whose heart pumps through scar tissue.

Houck seems to admit as much on “Ride On/Right On,” the album’s most addictive track, as over the bouncy bass thump and electric guitar meandering, he repeats, “I hate you turn me right on” while unable to help himself from telling the object of his desire to “Take your greedy hands/ Lay them on me.” This is the anthem of a conflicted lover who’s been around the block, yet can’t help but seek out what he knows will become heartache—even if the song itself is all foreplay and afterglow. By the time we hit “A Charm/A Blade,” Houck has again steeled himself against the impending pain that cuts deep, and he seems to be asking for the blow to be dealt swiftly. The song starts somberly and rises up into piano and horn-fueled crescendo that welcomes hurt so it can be dealt with and moved past. And in “Muchacho’s Tune” he admits, “Yeah, I’ve been fucked up and I’ve been a fool,” and pushes through the melancholy to dust himself off and return to a lover. “Quotidian Beasts” compares his lady to some emotional sorceress who’s dug her claws into him and pulled his guts out. Muchacho’s longest track at over seven minutes, “Beasts” soars in its chorus with Houck ascending into a falsetto “ooo” that loses itself in the clouds. By album closer “Sun’s Arising (A Koan, An Exit),” we’re again treated to the ethereal choral arrangement, but now it seems to signify the cyclical nature of life and love, of rising and falling and rising once more.

There are a few duds here too. “Terror in the Canyons (The Wounded Master)” is overly mopey, ramping up the piano and steel guitar quavers into a lost-my-dog, lost-my-truck level of country-western bellyaching. Houck rasps through “Down to Go,” another downer that mentions the words “heart” and “ache” every other line or so. But on the whole, Houck floats above these emotional nadirs, keeping to the bittersweet or even basking in beams of temporal joy.

Houck’s sixth album illustrates how he’s incorporating more electronic elements into his brand of melancholy Americana and how this has led him to come into his own as a singer-songwriter. Muchacho combines the best elements of his previous albums—a dash of country twang here, a sprinkle of naturalistic imagery there—and concocts a brew that’s less beer and tears than it is pensive earnestness. An extension of the success of Here’s to Taking It Easy, this new Phosphorescent album strikes the perfect balance between brooding in the dark and reveling in the light.