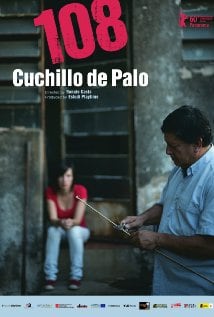 [xrr rating=3.75/5]When the body of Paraguayan director Renate Costa’s uncle was discovered on his apartment floor, the lonesome death was written off as a suicide. Ten years later, it’s memorialized by family and neighbors under a more euphemistic label, with everyone seeming to agree that he “died of sadness.” The filmmaker wasn’t convinced, however, with the sticking point another seemingly trivial detail: despite having memories of her uncle dressed in a wide range of colorful attire, Costa noted that his closet was practically empty at the time of his death. This information provides the impetus behind 108 (Cuchillo de Palo), an intriguing blend of murder mystery, historical examination and personal history, one that confronts familial demons while expanding those issues to a national context.

It’s all pretty impressive for a documentary that starts off in the director’s backyard, with Costa waving a handheld camera around in her father’s face, poking at him for answers. 108 at first seems to be leaning on the crutch of a private issue, overemphasizing the dramatic element of a family mystery in order to scare up some subject matter. The initial air of filmmaking unprofessionalism doesn’t help refute this notion, from the aforementioned shakiness to a specific bit of amateur weirdness: at one point the camera runs out of batteries, the screen goes black, but Costa keeps filming.

But as the story develops, these quirks seem less like quality issues than evidence of the steamroller passion the director has devoted to uncovering the actual fate of her uncle, an openly gay man. In her mind, and as evidence comes to support, his death is inextricably linked with the horrendous treatment of homosexuals under the reign of right-wing dictator Alfredo Stroessner, and how that legacy of abuse stems from Latin America’s troubling fixation on macho masculinity. For ample evidence of this fixation, Costa needs only to return to her father, whom she grills repeatedly, trying to establish some admission of complicity or guilt over his brother’s demise. He offers no apologies, holding tight to his impression of his brother as an unfortunate invalid, stricken with a sickness that rendered him subhuman, a stance that shows how ingrained these attitudes continue to be.

The director’s distrust seems to be that her uncle’s death was no accident, but that he was killed in a suspicious bit of cloak-and-dagger mystery tangentially related to previous violent incidents against gays. The evidence seems to back up the sense that something fishy is going on: the man lived partially under an assumed name, was involved in some shady dealings that may have included prostitution, and had a large, mysterious sum of money in the bank at the time of his death. Yet the Citizen Kane-style inquisition into the man’s past on which Costa embarks soon becomes less about uncovering an answer, and finds a new topic in exploring the outlines of Asunción’s unseen gay subculture, their complete detachment from mainstream society and the shameful way in which they continue to be treated.

Starting off with relatives and neighbors, Costa pushes steadily into this underworld, using the ‘108’ of the film’s title—a list of suspected homosexuals published in the ‘70s that has become a slang term for gays—as a starting point to examine her country’s consistently unseemly handling of this issue. The confessional interview style, with many subjects appearing with their faces blurred, doesn’t do the audience any visual favors, but it’s intimate and revealing, tying in with Costa’s familial starting point and her continued use of her father as a bad example. The film’s take on the subject isn’t delicate, but in many ways it’s the perfect treatment, a down-and-dirty examination of an eminently unsettling topic.