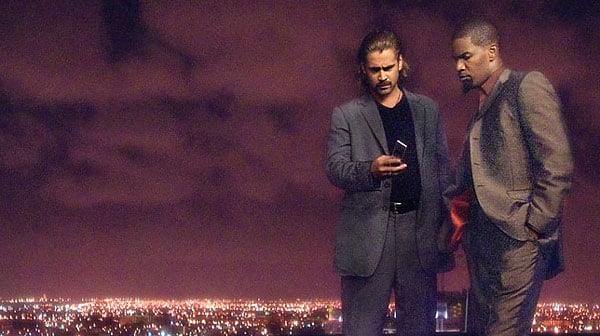 Whatever expectations might have existed for Michael Mann’s feature film adaptation of the hit ‘80s show he produced, Miami Vice, are obliterated by the jolting first shot of the theatrical cut. Mann abruptly opens in a nightclub as James “Sonny” Crockett (Colin Farrell) and Ricardo “Rico” Tubbs (Jamie Foxx) conduct a sting to catch a pimp, though this does not become clear for several minutes. Snatches of conversation provide not exposition but action, the handful of words folded into the constant, intimate movement of Mann’s digital camera. Mann’s cinema has long played upon impressionistic devices, from the color-coded world of Manhunter to the dizzying pop-historical frenzy of Ali’s opening salvo. But the portability and detail of digital allows Mann to push closer than ever before to his characters, and the bewildering opening establishes Miami Vice as a film of glances, of unspoken understandings between professionals, for whom body language can have as many tongues as spoken ones.

Those silent dialects help distinguish cop from criminal, subtle but crucial delineations in a film that takes the undercover-cop-gets-in-too-deep angle to an existential extreme. This is not new territory for Mann, who sent William Petersen’s Graham into possessed frenzies of killer identification in Manhunter and sat Pacino and De Niro down as borderline comrades in Heat, but he has never visualized this theme in so minute a way. When the FBI enlists Crockett and Tubbs to go undercover to catch a cartel leader, they do not simply adopt different identities but different postures, speech patterns and argot. Mann favors medium-to-close shots throughout, all the better to communicate through a web of glances and surveillance. Every gesture must be rigorously controlled, lest the slightest give-away be perceived by those who can literally tell from one wrong move who does not belong. 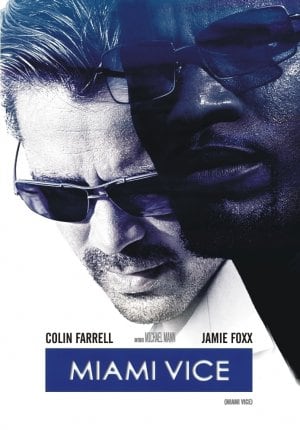 As Miami Vice attunes itself to these visual languages, it also shows off digital’s potential to create a new language of its own for cinema. Faces hover in close-up, popping so much from the background it sometimes appears as if the lens is pulling them into itself. Mann’s camera picks up spontaneous details in low light and slow motion that film stock cannot, such as seat upholstery flaring like a drag on a cigarette when a .50-caliber bullet rips through it. Both Miami Vice and its successor, Public Enemies, corrupt the verité connotations of handheld digital, but such throwaway details lend a degree of verisimilitude that does suggest the format’s capacity for hyperreal visualization. But Miami Vice does not merely clash with an audience’s ingrained sense of what a film should look like but also what it should move like. Motion in this movie feels alien, and when bodies start falling in the climax, they hang in the air for an extra half-second as they tumble, making each death vaguely graceful.

Perhaps that unconventionality accounts for the film’s reception. Gauging by conventional values as a blockbuster and adaptation, Miami Vice can be thin gruel indeed. Even a positive review, like Dana Stevens’, paints the film as more or less a straight update of the TV series. Though she calls the feature “grittier” and “darker” than the show, she still treats the movie like an extension of it. Linking the movement between South America, Havana and Miami, Stevens says, “There’s no shortage of stark-white apartments with spectacular ocean views, where gorgeous biracial women take long hot showers as R&B throbs in the background.” Strictly speaking, that is not inaccurate, but that depiction makes this sound like an easygoing fantasy rather than a deeply melancholic, subjective interpretation of these stylish adornments.

Stevens’ take indirectly supports Jonathan Rosenbaum’s negative review, which argues that Mann “tends to neglect [the characters’] visual contexts” through his close-ups. Yet by breaking down the distinctions between the film’s Atlantic locales, Mann does not so much divorce his characters from the world as show them entering into a different kind of world separated not by national boundaries but existential ones. The subtle triangular trade established by the swift movements between settings serves to homogenize them for people who find themselves doing the same thing in Miami that they do in Havana and elsewhere.

Such touches bring out the poet in Mann like never before. Mann links the rat (John Hawkes) who sold out the aforementioned informants and his threatened wife via blood, the wife’s pooling from offscreen when cops discover her corpse, the rat’s in a streak that appears from under the semi he leaps in front of just before the shot cuts away. Blood serves similarly synecdochical qualities elsewhere, as in the pink mist that rises from the head of a white supremacist holding Tubbs’ girlfriend, analyst Trudy Joplin (Naomie Harris), hostage, or the squib that splatters the lens in one shot of the climax. The latter even makes poetry of pixels, the dots of fake blood fragmenting the image into the tiny squares it comprises when the camera turns into the light.

The night sky over Miami itself provides almost endless fascination. The camera picks up the shades of dim purple and orange embedded in the midnight sky by a city of lights, and the final shootout looks as if it takes place in a lightning storm on Jupiter. Stevens’ review makes Miami Vice out to be a slightly darker version of what is still, fundamentally, a dreamy getaway, but Mann’s abstractions make for a hellish nightmare. That suffocating atmosphere weighs on the romance that blossoms between Crockett and one of the top cartel members, Chinese-Cuban Isabella (Gong Li).Their sudden boat trip to Havana for mojitos certainly carries an air of romantic escapism, but the futility of their relationship is as clear in Cuba as it is in Miami. The only haven is the in-between, but thanks to go-fast boats and Mann’s editing, there hardly is any in-between in this multinational but constrictive world, and neither detective nor cartel member can be extricated from it. “This is beyond a bad idea,” Crockett says of the tryst, “and it has no future.” For all his candor, though, Crockett cannot bring himself to admit it has no present, either.