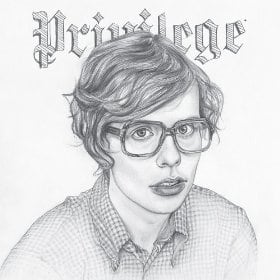 [xrr rating=3.75/5]Parenthetical Girls’ new album, Privilege (Abridged), is a collection of works that had been incrementally released as a series of mail order only 12” EPs, five in all. The Girls – namely Zac Pennington and Jherek Bischoff (“girls,” “boys” – Pennington plays with the distinction) – self-release their material through their own label, Slender Means Society, which affords them the liberty/indulgence of being able to DIY the shit out of whatever they’re doing. And that they do. Each EP was hand numbered in either Pennington or Bischoff’s blood, limited to 500 copies per printing (lest we drink them dry). The deluxe edition box set, as it were, collects the series of 12”s and includes, among other things, a DVD featuring Privilege’s promo films and commentary, a hand-letterpressed bonus insert, an “exhaustive” lyrics booklet and, for the skeptics among us, blood-draw authenticity films. $200 for this top shelf item. It is exhaustive for sure. As in, it exhausts me, particularly when the conceit of the album zeroes in on the slings and arrows of class warfare. I can’t tell if this is overzealous, bio-curious artistry or a self-referential illustration of the extremes of privilege. One thing is for sure: Pennington understands fetish. It’s a great joke, provided I’m not the mark.

To be fair, Privilege is not a sermonizing album; its aims are for elegant and arch observation, not political gasbagging. Pennington has said of Privilege that the thematic sentiments are “very selfish,” absent of macroscopic fervor and “not with any greater worldly disdain for the way people who are poor get treated.” His resentments are person-to-person – sexual politics are so much more enveloping than angry old Marxist economics anyway. Doubters should view the theoretically safe NSFW video of “The Pornographer” : on top of rumpled white sheets, the camera is trained on Pennington’s face, mouthing the lyrics as an unseen other is… mouthing him. An ultra-foreground guitar riff, recalling the dominating side-to-side tilt of Depeche Mode’s “Personal Jesus,” cycles through the song, offering up angles to offset the vocals coming at you from the folds of a clean/dirty motel pillow. Aside from the fact that this demonstration is a thousand times hotter than any bona fide NSFW vid (and guys, I bet you’d agree), it underlines Pennington’s engagement with exhibitionism: willful, provocative and we all walk away shameless. First the bloodletting. Now he lets us f*ck him. For art? If we all like it, does it matter what for?

Bischoff, composer and mad genius behind his smallwork orchestral project presented in last year’s Composed, is an equal partner in this effort if perhaps more camera-shy. The complexity of the arrangements is just remarkable, Bischoff’s instincts for layering and pairing often surprising both within individual songs and across the record. There are still chamber elements here: the busybody plucking in “For All The Final Girls” is disrupted by slashed bowing, strings and piano provide a frenzied flow to “Sympathy For Spastics,” huffing clarinet and winking glockenspiel dodge through Pennington’s vibrato in “The Common Touch.” But more captivating are the modern appropriations, all of the New Wave weirdness that feels totally familiar and also totally mutated on Privilege. “Careful Who You Dance With” channels a minimalist Eurythmics vibe, and “Young Throats” seems as if lifted from a 2021 libretto, powerfully frizzy synths and drum machine contrasted with a minor key chorus of adolescents that darkens even further a devilishly charged vocal performance by Pennington.

The problem with this is that the Girls may be giving us more than we can take. Both Bischoff and Pennington anguish over detail; the greatness competes and it can overwhelm the senses. It’s a fine problem to have. Pennington’s lyrics, rarely verse-chorus-verse, are rather series of strung-out, strung-together high concept scenes. Everything’s a novella, and the wordplay varies from wry to oblique to clever for cleverness’s sake. “I came out of my mother/ With a blessed head for figures/ And with yours now above me/ Both long and unlovely/ I think we can safely say/ Such sums must become me,” he sings in “The Common Touch,” and you must make the wry/oblique/silly determination. The verbosity can be flooding, every song a majestic commentary, and parsing it all out is a task the listener is eventually saddled with.

“Hateful and hollow/ Smug and smart/ Well, don’t we look the part?” Pennington flutters in “Evelyn McHale.” For now he is on the right side of this, more smart than smug. But like Morrissey before him (and Privilege is a Smiths progeny for sure – I can’t even see that line without seeing “Hatful of Hollow”), the charming misanthrope is always in danger of falling too far in love with his own histrionics. We’re pretty sure Morrissey was lying when he groaned that he “had no one ever”, but that gloomy, forehead-against-the-wall meditation was something we could all cleave to. If Pennington could whittle down his message like that, that’s the way to true penetration. I see those delicate collarbones but he’s not really naked, he’s not really exposed, until he drops some of the syntactic self-possession. Until then, I worry that the blow job meant nothing.