South by Southwest (SXSW) started out as a local music festival in Austin and quickly became the foundation of their claim to be the live music capital of the world. Since its start in 1987, SXSW has grown to include Film and Interactive media sessions in addition to the five days of official music showcases. The festival is a bucket list event, much like Mardi Gras in New Orleans, Oktoberfest in Munich or New Year’s Eve in Times Square. But unlike those destination moments, people come back again and again, called by the novelty of new trends in music and fresh band faces. The core idea may remain constant but each year is a kind of sonic snapshot. Another big difference is that SXSW has an undercurrent of tension you can’t find anywhere else. It’s created by the high stakes involved for the participating performers. Groups come to Austin looking for their big break. Whether trying to build their fan base or get an elusive record deal, they have a lot riding on creating momentum by appearing at the festival. Many of them land spots in the official music showcases during the week, but they also find slots in the countless unofficial shows. Indeed, plenty of players come without anything lined up and busk on the street for attention and the gas money to get home. 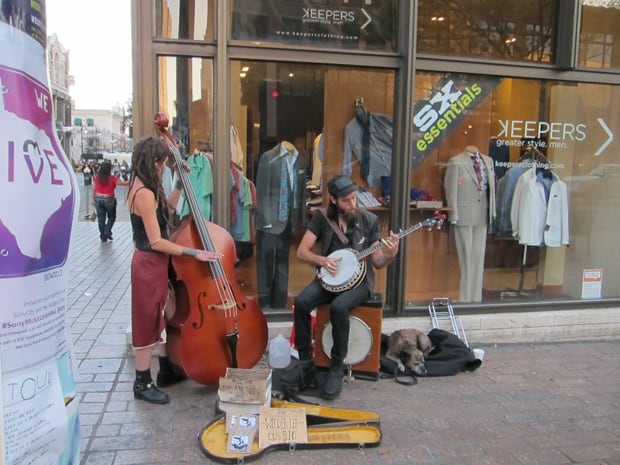 The scene is crazy. Centered on the Sixth Street Historical District but radiating out into the neighboring blocks, the area is packed with venues. Musical styles clash and compete – hardcore hip-hop may dominate in one stop, but a few steps further and the deep throb of metal elbows it aside. The street is a sonic buffet, promising something for every taste. It can be overwhelming, creating a sense of paralysis. There’s always the niggling doubt that somewhere nearby, the perfect band is just stepping onto the stage. Committing to any of the immediately obvious choices will mean that an opportunity is lost. And it’s true; everyone here will miss much more than they’ll see. It’s a lot like the Great American Beer Festival (GABF) in Denver, which also offers too many options. GABF 2012 featured 2700 beers from almost 600 breweries. Similarly, SXSW 2013 included almost 2300 showcasing acts on 104 stages (plus untold unofficial shows). 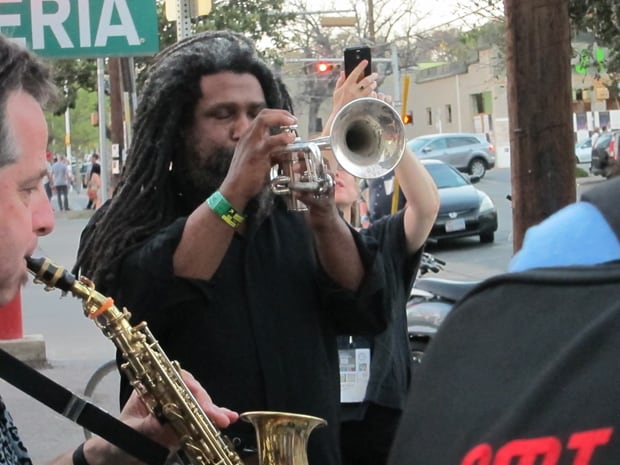 With statistics like that, attendees need to think strategically. It’s a balancing act – Smaller, unknown acts or big names? Old favorites or new sounds? Pick a specific style or hit a scattershot of musical moods? – each decision shapes the festival experience. I opted for a mix of plan and improvisation. I picked a set of shows and bands, but left a lot of room open to wander wherever my ear led me. There were several bands I had reviewed and I wanted to see how their live shows measured up to the studio work. I also had a small group of favorite acts I hoped to catch: the Flaming Lips, Richard Thompson and Billy Bragg in particular. The Flaming Lips were the only one that didn’t pan out. They were scheduled to close a showcase at the Belmont on Thursday night and then play a large, free show at Auditorium Shores on Friday. I decided to avoid the cattle-call on Friday and invest my time in the Belmont show, arriving early to queue up. The lineup at the Belmont included other groups like Braids, Frightened Rabbit, and Alt-J, with the Flaming Lips slated for 12:15 am. I got in line before 5:00 pm (2+ hours before the doors opened), with about 45 people ahead of me. Then I learned the cruel hierarchy of SXSW. Official conference badges outrank wristbands and wristbands have precedence over general admission attendees. In practice, this meant the most popular shows have two or three lines, with the badgeholders getting the first chance to enter. With only a wristband, this meant that my great line position wasn’t much advantage. I watched the long line of badgeholders build and then waltz past me into the club. Eventually some of us with wristbands got to go in, but as soon as more people with badges arrived, we were blocked again. By the time the club was filled to capacity, I was sixth in the wristband line. As I watched the badge line swell to more than 50, I had to decide if it was worth waiting in the hopes that people would leave before the Flaming Lips came on and that there wouldn’t be too many people with badges waiting. After camping out for three and a half hours, I abandoned the line and went looking for an alternative. Even though my experience at the Belmont was frustrating, it didn’t ruin my night because so many other choices remained. 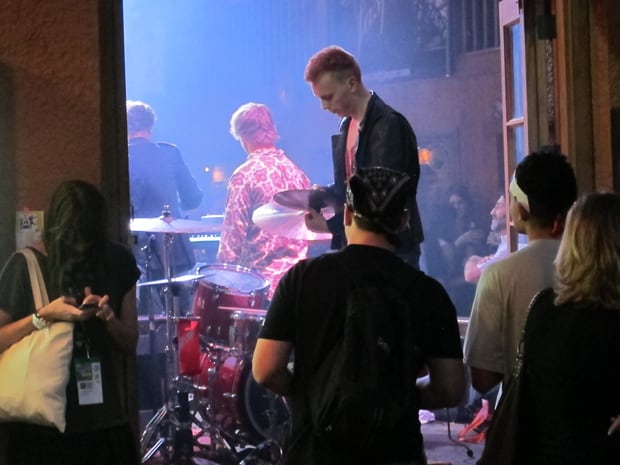 It’s easy to fall into the rhythm of SXSW. Before 11:00 am, the streets are wide open, with a few lines forming at the clubs with early shows. Many of these are sponsored events, with free alcohol and/or food. Tip: it helps if your booze preferences are flexible; from Irish whiskey to flavored vodka, the media or label hosts often find corporate partners who push their brand. The musicians can seem a bit bleary, but they adjust to the time and pull together good performances despite the hour. By mid-afternoon, the crowd is picking up. Between the aspiring bands and corporate shilling, visitors find themselves buried in a sea of handouts: water, food and flyers. Countless rogue bands offer CDs which will litter the streets as the night wears on. This is a good time to visit the food trailers throughout the area and get fueled for the coming evening. There are a plethora of choices from Tex-Mex tacos to Korean barbecue or Turkish/German döner kebap to vegetarian Indian treats. As the evening rolls in, the vibrantly noisy streets fill up with people looking for their first band of the night. The nomadic trek will continue into the early morning hours as the people move from oasis to oasis. Eventually, it’s time to find a way back to the hotel for a quick bit of sleep before the next day starts anew. 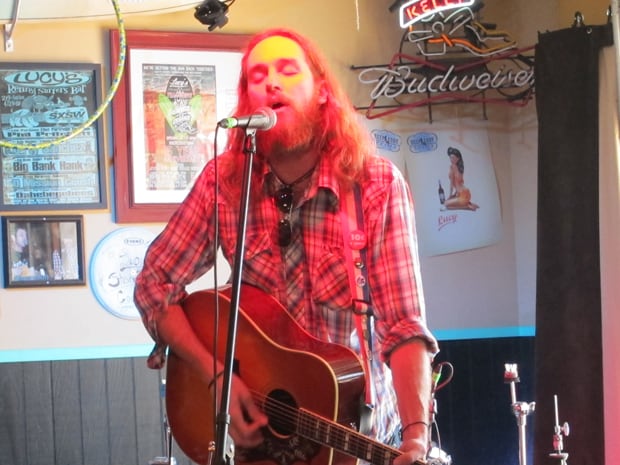 While I missed most of the huge names at SXSW, like Green Day, Ice Cube and Prince (damn it!), I did discover some great bands. One of my favorite finds was the rich Americana sound of Some Dark Holler from Birmingham, Alabama. Their songs featured sweet harmonies with mournful fiddle accents, blending light with the darkness. Another great band was Manic Sheep (Taipei, Taiwan). Their set at the Duma Taiwan party started out with a heavy pop vibe, but veered into dark, driving post-rock. On the electronic side, Michna (Brooklyn, NY) laid down a highly visual show backed by a mix of chill beats and heady breaks. By contrast, Austin’s Hard Proof was hot as Hell with a jumping mix of Afrobeat and dance-happy funk. Finally, there was Kao=s…but more about them below.

Each day had its own highlights: 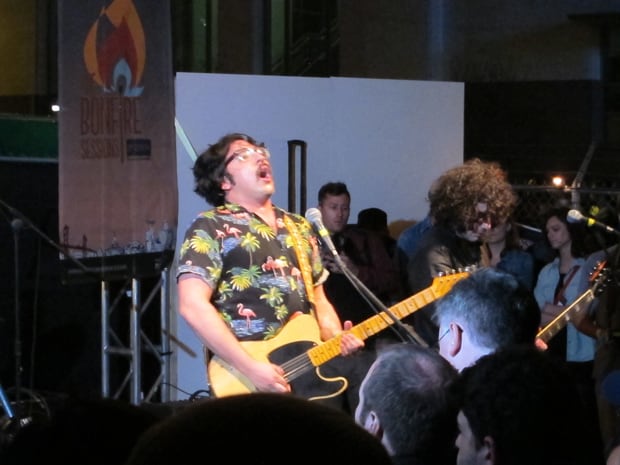 Tuesday – After getting settled into town, I sat down and interviewed Team Spirit before their set at Viceland. Ayad Al Adhamy started this group when he quit as lead keyboard player in Passion Pit to become a guitar-slinging front man. Talking to the band was a relaxed way to slide into the festival mood. Their show that night with Wavves, Japandroids and others was a rocking good time. 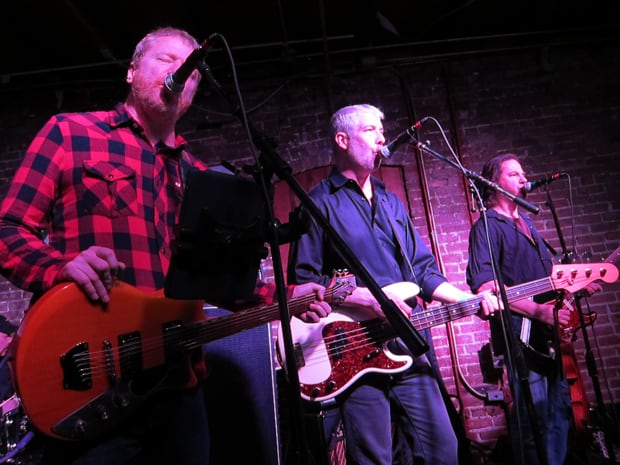 Wednesday – I caught the Brooklyn Vegan hosted show at the dual venue of The Junior/The Main. The headliners were Camper Van Beethoven and Robyn Hitchcock. David Lowery’s Camper Van Beethoven played a mix of old classics like “Take the Skinheads Bowling” and their intensely psychedelic cover of “Pictures of Matchstick Men” along with tracks from their new album, La Costa Perdita. Hitchcock had a solo acoustic set peppered with surrealistic stage patter and amusing digressions. 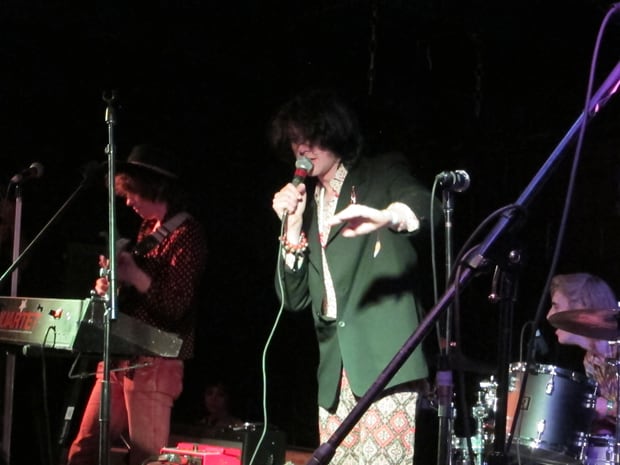 Thursday – After the Belmont/Flaming Lips fiasco, I bounced from club to club. Eventually I made it to Red 7 Patio in time for head-banging punk from Bleached. The unpleasant highlight, though, was the following set with Foxygen. The band was touted to be one of the breakout acts to see this year, but managed to lose most of their credibility with an onstage meltdown. First, the crowd grew restive as sound problems dragged out the set-up. Once the group began playing, it seemed to be fine as they created a creepy camp mix of Bauhaus meets Thee Oh Sees. Then, between songs, front man Sam France went ape in response to a heckler. After he stormed off the stage, declaring the set was over, guitarist Jonathan Rado apologized, “Sorry. It’s been a long two months.” France came back out for a final song, making his own apology, but it didn’t last and he threw a final fit and left the stage for good. 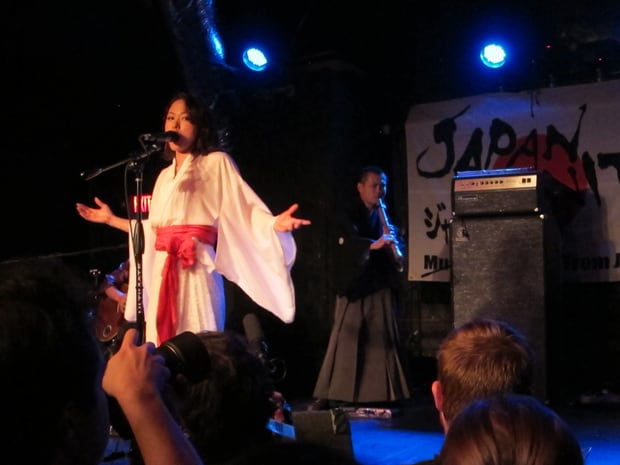 Friday – Richard Thompson and Billy Bragg were great at the Waterloo, but the prize was seeing Kao=S at Japan Nite at Elysium. The instrumental line up hinted at their fusion approach. The banjo-like samisen and shakuhachi flute played with acoustic guitar for a folky, new-age pop with a uniquely Japanese flavor. Kaori Kawabuchi, their lead singer, combined traditional dance with her vocals to create a spellbinding performance. The band’s elegant arrangements and polished show was a refreshing contrast to the rawer rock shows I normally see. They even have their own manga; what could be cooler than that? Aside from Kao=S, Japan Nite demonstrated the wide range of Japanese bands, with Jake Stone Garage providing a high energy, punk-metal contrast to the earlier sets. Heading out, I got a final chance to catch Kao=S as they took it to the street to busk and amaze the passers-by. 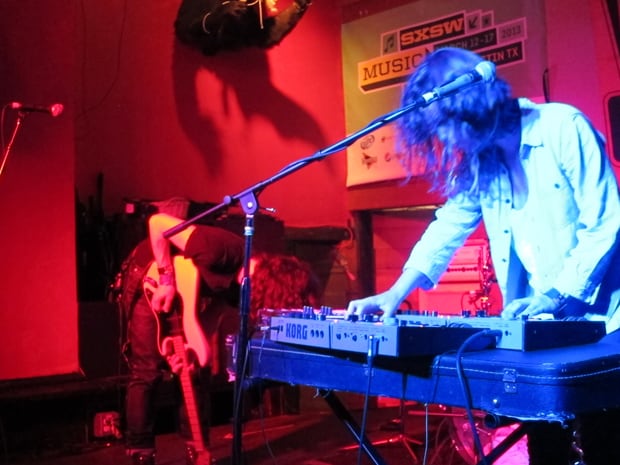 Saturday – The day started off with a thick haze of layered psychedelia from Montreal duo, Valleys. Their rich sound was languorous but intense, with a mix of electro-pop synth and ringing overtones. The swirling noise-fest was a meditative way to prepare for my last day at SXSW. There would be plenty of time later in the day to thrash to the screaming punk throb of METZ, to savor the funky soul of the Monophonics and to be amused at the punch-drunk leader of Merchandise (Tampa, FL) as he told us how tired he was of their new songs.

As I hit the road back to Colorado on Sunday, it would be reasonable to guess that my musical lust had been sated. I just punched up David Bowie’s The Next Day and headed North on I-35.