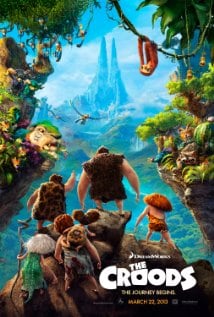 [xrr rating=3.0/5]The bar for animated movies has been raised so high in recent years that it’s difficult not to be disappointed by even the average entry. Movies like Toy Story 3 and WALL-E have so far advanced both the storytelling possibilities and visual technology of their genre that even a slightly sub-par animated children’s movie can seem worse than it actually is, just by comparison. While The Croods isn’t blazing any new trails or doing anything remarkable, it still manages to avoid that particular trap. It’s a perfectly serviceable, entertaining film, but rarely pushes for anything more than that.

Eep (Emma Stone), the eldest daughter of the titular family of prehistoric cavemen, lays out the family’s survival tactics in the first few moments of the movie: always be afraid. As rigorously maintained by her father Grug (Nicolas Cage), the Croods’ entire life is to hide in a dark cave with a boulder for a door during the night, and then try to scavenge whatever meager food they can in the surrounding desert without being killed. Day in and out, Eep is taught to fear everything and that anything new is automatically bad. You might see where there’s an opportunity for life lessons here. But when a stranger named Guy (Ryan Reynolds) appears with the ability to create fire, and more comprehensively, come up with new ideas, everything changes. He and his sloth companion Belt (who also doubles as a belt, natch) predict the imminent end of the world, which for all intents and purposes comes true: the family’s cave is destroyed and they’re forced into a strange new world full of danger.

The bulk of The Croods is devoted to the family’s journey to a far away mountain range that Guy has somewhat arbitrarily decided is safe from “the End” (though why that would be so is never explained), and for the relationship between Eep and Grug. Though Eep is definitely the protagonist of the film, her father actually has the stronger story arc; while she begins the film already prepared and eager to explore the world, Grug’s slow process of learning to accept change and even formulate his own, new ideas, is far more interesting and emotionally engaging. While the rest of the family (including Catherine Keener as the mother Ugga and Cloris Leachman as an indestructible, ancient cavewoman grandmother) are one-note at best, they’re largely kept to the side except for punchlines and the occasional prod to keep the central relationship moving.

And of course, a movie like The Croods lives and dies on the quality of its animation. While it’s not a game changer like Finding Nemo, directors Kirk De Micco and Chris Sanders create a vivid world for the Croods. They mix equal parts plausible prehistoric animals (giant predatory cats are the primary antagonists) and fantasy creatures easily, and a central sequence in which the family has to work individually to make it through a gorgeously rendered maze is amazingly done. The few 3D scenes (including a breathless chase scene in the beginning) are nothing much to speak of, but at least they’re not obnoxiously sandwiched in at every moment.

When it comes down to it, The Croods is an entertaining movie, but not one with a lot of depth. The central lesson is as basic as “don’t be afraid to try new things,” which is true enough, but there isn’t a lot of emotion behind it. Except for a heartbreaking climactic scene, much of the film simply feels like blunt jokes (according to the movie, even cavewomen love shoes beyond rationality) and simplistic morals. There’s not a lot wrong with that, but it’s not all that special either. Just serviceable.