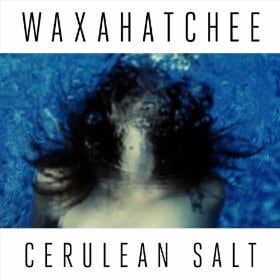 It’s a cast of damaged souls, haunted by substance abuse, passive-aggressiveness and sins of the father that haunt Cerulean Salt, Katie Crutchfield’s second album as Waxahatchee. Throughout the record’s 13 brief songs of varying genre touchstones, Crutchfield presents an almost Sylvia Plath-like level of poetic confessionalism, depicting characters at different emotional stages in multi-faceted relationships. Frequently, her words are packaged in aphoristic couplets, the most notable being stark, understated disappointment of “We will find a way to be lonely any chance we get/ And I keep having dreams about loveless marriage and regret,” found in “Swan Dive.” Because of the songs’ brevity, only three of which are longer than three minutes, and their rapid presentation, the album is more a collection of vignettes, presenting impressionistic glimpses into the facets of formerly loving bonds now on their last legs. If there is a unified narrative throughout, it is not presented in linear form, which spices up the typical break-up album paradigm by shifting about the chronology. The story is told in stream-of-consciousness fashion, certain cuts flashing back to better times and then jumping to the present (or future, if one wants to get fatalistically bleak) for the eventual end. What results is a disorienting, yet compelling, effect.

Crutchfield is backed this time around by a band comprising Keith Spencer and Kyle Gilbride of Swearin’, the group of Crutchfield’s twin sister and former P.S. Eliot bandmate, Allison Crutchfield. Their presence, however, doesn’t interfere with Crutchfield’s minimalistic style or make the recording’s intimacy seem crowded. Cerulean Salt sounds as though it were recorded in one live take, performed in some rundown motel room or a secluded cottage wherein Crutchfield could marinate in her ideas. Take the acoustic-led “Blue Pt. II” or “Tangled Envisioning” for example, wherein you can hear, and almost feel, the fingers sliding up and down the guitar. Yet Crutchfield’s sweet and wounded vocals with the hushed whisper they produce — seemingly pregnant with a force that could explode into a cathartic caterwaul at any moment — are the star of the album. At times, she is consoling or disavowing, determined or wavering. The imperfections of her voice that flare up here and there, the occasional cracking or off-pitch note, cement her sincerity.

What serves to prevent the record from slipping into redundancy or monotony is the sheer diversity displayed in the sonic textures. Opening song “Hollow Bedroom” is but Crutchfield’s voice and roiling electric guitar lines, acting almost as an intro to the meatier “Dixie Cups and Jars,” with its maraca shuffle and sidewinding distortion. Crutchfield’s sparse lyrics paint vivid images of domestic strife: “I watched your dad give you away/ I watched him drink the bitter taste and his exertion away/ Makeup sets on your face like tar/ The champagne flutes poorly engineered/ Employ Dixie cups and jar.” She delves into jangly folk on “Lips and Limbs,” spectral acoustic hypnotism on “Blue Pt. II” and fuzzy guitar rock on “Coast to Coast,” “Waiting” and “Misery Over Dispute.” A definite ‘90s alternative vibe runs through the record, a Pixies-Nirvana quiet-loud-quiet template providing the base on some of the numbers (see “Lively” and “Peace and Quiet”). Come to think of it — and give me some leeway on this — the album seems a bastard child of two of that era’s finest documents, specifically Liz Phair’s Exile in Guyville and the Afghan Whigs’ Gentlemen, in terms of those albums’ unflinching honesty in examining crumbing relationships and responsive gender dynamics.

Themes of alcoholism, drug dependence and being unable to prevent your past from informing (or staining) your present are rampant. “Lively” address the codependence of one intravenous drug user and his alcoholic mate being pulled under by their respective vices: “I had a dream last night/ We had hit separate bottoms/ You yell right in my face/ And I poison myself numb.” That Crutchfield sounds deadpan is to exemplify her narrator is no longer able to sustain the strong feelings and is merely going through the routine. On the snare drum clap and bass thump “Brother Bryan,” Crutchfield presents a scene of a woman traumatized by her brother’s death, her inability to move on causing her to project his ghost onto another man. “I said to you on the night that we met/ ‘I am not well,’” she sings to introduce the song, putting the listener in the new man’s position. Toward the song’s end, the ongoing tragedy is made clear in the narrator’s stagnation: “My sister’s eyes flood like rivers of wine in your absence/ So we echo each song/ To which you’d sing along/ A surrogate-him.”

The album’s finest points come at the end via a three-song suite. “Swan Dive” has a dainty guitar plucking with a light tribal drum pattern. I singled out one couplet from the tune above, but the song is composed of one line after another of affecting declarations of the failings plaguing both the narrator and her target: “I cling to indifference/ You, to your worst memory” and “I will grow out of all the empty bottles in my closet/ And you’ll quit having dreams about a swan dive to the hot asphalt” are just two of the killers here. Riding the song’s heels is “Peace and Quiet,” the last true rocker of the piece, the understated cooing verses giving way to ramshackle drumming, simulating a sense of purging and thus, resolution. From there, the album wraps on a more subdued note with “You’re Damaged,” which features just Crutchfield on acoustic guitar, pouring herself out. It’s a suitable way to end a record that fits firmly within the confessional realm, without being hampered by the category’s more melodramatic limitations.