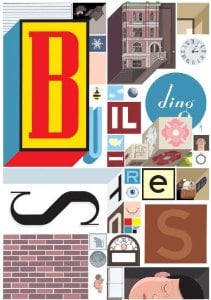 [xrr rating=5.0/5]It’s hard to know where to begin with Chris Ware’s Building Stories. That statement is applicable to writing a review of this new epic reinvention of the sequential art storytelling form (both “comic book” and “graphic novel” seem woefully insufficient to describe what’s happening here), but it’s also true of the simple act of sitting down to read it in the first place. Delivered in a sturdy cardboard box that seems more likely to contain an elaborate board game than a piece of art, Building Stories is comprised of “14 distinctively discrete Books, Booklets, Magazines, Newspapers and Pamphlets.” While a grid on the back of the box offers helpful ideas as to “appropriate places to set down, forget or completely lose any number of its contents within the walls of an average well-appointed home,” there are no instructions about the order in which the individual components should be read, examined and admired. Ware’s intention, so it seems, is for the different chunks of the vast, slyly interconnected story to be consumed in whatever near-random order each respective reader chooses. Whether a detail is foreshadowing or callback is completely reliant on the selection process of every person who slides the cover free.

Given the kinetic structure of the story, it’s difficult to indentify a main character, but a significant amount of Ware’s attention is devoted to an unnamed brunette woman with a prosthetic left leg. She goes to art school, combats loneliness, gets into poor and promising relationships, has varied encounters with neighbors in the brownstone apartment building where she lives for a time, deals with self-doubt, jealousy, heartache. In short, she lives a whole life, offered up by Ware in beautifully rendered, meticulous panels that fully take advantage of all of the possibilities of the form. Ware masterfully tells the stories in ways that are clear and concise, but also astonishingly creative, bending the progression of images around pages large and small. Visual motifs abound, both in the components within the images (flowers figure prominently) and in the layout of the pages, which offer parallels in the positions of panels or give certain objects and people heavy symbolic weight by placing them prominently in the center. Ware’s sense of design has long been impeccable, but at times in the past that very quality has overwhelmed his grasp of narrative. Here, the design decisively elevates the storytelling.

Befitting its deliberate piecemeal presentation, Building Stories is largely comprised of material that’s previously emerged elsewhere over the course of nearly a decade. There’s “September 23rd, 2000,” which first saw light (in large part) serialized in the New York Times Magazine, whimsically presented here in a small hardcover that emulates a Little Golden Book, right down to endpapers adorned with animals, foliage and a place for a youthful bibliophile to crayon in their name. Material is drawn back from Kramers Ergot, McSweeney’s and a number of other places. And yet there’s a remarkable unity to the work, a sense of prevailing artistry that connects the disparate parts. Ware’s voice as a creator is markedly strong throughout Building Stories, whether probing into the internal pendulum of emotions experienced by his ostensible main character or going further afield with sequences narrated from the perspective of the brick building itself or relaying the tragicomic travails of Branford, the Best Bee in the World.

With a $50 price tag admirably backed up by the almost overwhelming presentation, Building Stories was sure to be an impressive package. Though Ware could have coasted on sheer scale, he admirably opts for depth. The actual writing is wonderful, both in the measured, sharply observed lives of the different characters, but also in the use of language. Ware knows when thick overstatement in the narration will add a comic edge and also how to shape meandering inner thought processes to get at the contradictory cores of the people on the page. He stuffs his pages with images, and they all have rich ideas behind them. Building Stories is daunting, exhausting and grand. Like Art Spiegelman’s Maus from two decades earlier, it so completely transcends any attempt to contain its importance to solely the field of comics that it announces itself as nothing less than a vital piece of literature, no qualifiers necessary or welcome.