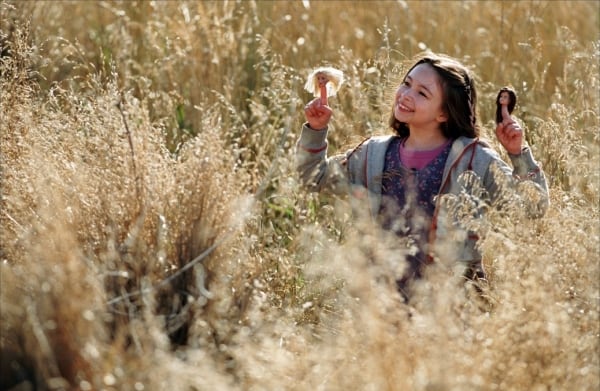 You’d be hard-pressed to find a serious film within the past decade that induced as much kneejerk vitriol within the critical ranks as Terry Gilliam’s Tideland. Descriptors such as “vile,” “excruciating” and “unwatchable” were cast down from so high on horses that that the film was quickly buried deep down the rabbit hole. And all this came after the inability to find a viable distributor for his macabre fairytale forced Gilliam–a director who brought us such oddities and marvels as the seminal farce Monty Python and the Holy Grail and controversial epic Brazil–to wait a year after its 2005 festival debut to see it receive an intensely limited release. With a dearth of promotion, Tideland languished on a handful of metropolitan screens and domestically recouped barely $61,000 of its $19 million budget. It was an abject failure in every respect but one: it’s an utterly unique and fascinating film.

As with most Gilliam pictures, Tideland is a challenge. The actual release of this morbid Alice in Wonderland tale predates Pan’s Labyrinth by only a couple of months but by year’s end it was critically received as a polar opposite to Guillermo del Toro’s own unforgivingly dark fantasy. The critics who bashed Tideland–and they were legion–often did so by making lazy puns about the literal train wreck at the climax also serving as a metaphor for the film as a whole. They turned up their noses at subject matter that involved (at least from Jodelle Ferland’s Alice stand-in’s perspective) unfathomable child neglect, drug overdoses, frightening mental illness, profound cognitive disability, hints of necrophilia, unsettling human taxidermy and twisted elements of sexuality. But Pan’s Labyrinth would later prove that a young girl in WWII-era Spain who is fantastically imperiled by both a murderously draconian stepfather and a child-eating, palm-eyed monster is far more palatable to general opinion than a mentally-unstable child retreating into her various warped dissociations when faced with more aberrant and less historically-grounded evils. 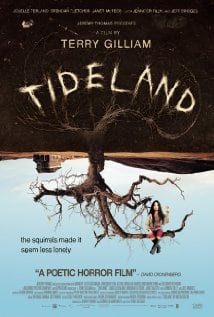 Now, part of the backlash was admittedly Gilliam’s fault. In mirroring the film too closely with Alice in Wonderland tropes and, most notably, for prefacing it himself with a disclaimer in which he also hyperbolically states “I was 64-years old when I made this film. I think I finally found the child within me. It turned out to be a little girl,” he sets himself up for justifiable pushback. But while many critics chalked up the oddity of the controversial director’s film as Gilliam being less-effectively Gilliam, many failed to acknowledge that this is a fiercely loyal adaptation of a relatively more visceral novel by Mitch Cullin, one which the New York Times (which blasted the film) called “brilliant and beautiful.”

For all its surreal and macabre diversions, Tideland is a straightforward enough story. Jeliza-Rose (Ferland) finds herself left to her own devices in an abandoned house after both of her junkie parents (Jeff Bridges and Jennifer Tilly) chase the dragon all the way to the grim reaper. While her mother’s body was left wrapped in a bed sheet in their city apartment, her burned-out rock ‘n’ roller father sits stock-still, decomposing in the squalid farmhouse to which father and daughter had retreated. Subsisting on ant-infested peanut butter, Jeliza-Rose carries on much as she did before, especially given that dull-eyed, slack-jawed parents are all she’s ever known. At first, her only friends are the disembodied Barbie doll heads she both voices and wears on her fingers and a rogue squirrel that scurries into the walls of her porous home. Soon, she’s befriended by a severely cognitively disabled and epileptic neighbor named Dickens (Brendan Fletcher) and, less so, by his ominously shrouded, bee-sting obsessed sister Dell (Janet McTeer). The members of this triad enable each other’s tortured coping fantasies to the point that, when Dell embalms Jeliza-Rose’s putrefying papa and erects him at the head of the dinner table in a room newly painted white, everyone involved seems a great deal happier.

The biggest difficulty most people have with the film is that it’s impossible to pigeonhole. It’s not straight horror; far from it−thanks to her power of disassociation, Jeliza-Rose never feels entirely threatened. There are moments of levity, but never does Gilliam mock his damaged characters or shoot for gross-out comedy. Then again, this is not at all a film that tackles heavy social or philosophic issues, opting instead to unapologetically dwell in the manic netherworld of its title−not quite anything in particular and many things all at once. And though fans of the film (Tideland was received in a notably more positive light by viewers than by critics) tend to glorify it to the point of high art, it’s certainly not that either. What Gilliam has done instead is craft a movie that never allows one to feel comfortable. The nearly unbearable tension throughout isn’t generated from any imminent peril that has befallen Jeliza-Rose (though she’s also far from safe), but rather by our inability as viewers to find any convention on which to ground ourselves, any static reaction to the disturbing imagery on which to cling.

The entire picture is presented from Jeliza-Rose’s perspective, as driven home by the omnipresent upturned camera angles and seamless slipping in and out of dark fantasy and ink black reality. Unlike Pan’s Labyrinth or even Alice in Wonderland itself, there’s no definitive dividing line between the two, and that’s primarily why the righteous indignation and critical furor over Jeliza-Rose’s “silly-kissers” overtures with the cognitively-impaired adult Dickens were so overblown. The film toes the line with exploitation, but always pulls back before crossing that line, and in doing so it further defies the viewer’s expectations. Though it’s challenging and often unpleasant, Tideland hinges on the fact that being a kid is some crazy shit, regardless of the quality of upbringing, and that the rigidity of adult perspective is prone to snarling outrage when confronted by the darker reaches of a boundless imagination.