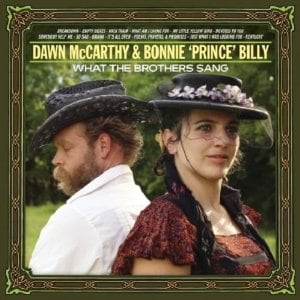 [xrr rating=3.5/5]Dawn McCarthy (of Faun Fables) is one of Will Oldham’s long-term collaborators, assisting with vocal arrangements and acting as skillful backup vocalist. Nevertheless, What the Brothers Sang is only the second time she’s received equal billing, even though the first – 2007’s demos collection culled from The Letting Go sessions, Wai Notes – reinforced that their collaborations are among the most lovely in his extensive canon. It makes a lot of sense for the two to record a full-length of songs by The Everly Brothers, a duo that has impacted pop songwriters since the ’50s and are well known for their impeccable harmonies.

What the Brothers Sang plays much more like a tribute album than a covers album, due in part to the song selection. Few of the Everly songs included would qualify as massive hits (“Devoted to You” being a notable exception), and most of them originate from the late ’60s, after the brothers moved from Cadence to Warner Bros. The rest of What the Brothers Sang is comprised of Everly B-sides and unreleased material.

McCarthy and Oldham seem to have chosen songs that could be lovingly adapted to a style more in line with their own talents, which makes sense, as not all of these songs were even written by Don and Phil Everly themselves. The Everly Brothers are of an era when singles were often more important than albums, and the duo’s takes on other artists’ songs are vital to that legacy. Fittingly, a few of those Everly interpretations are referenced here, including Kris Kristofferson’s weary country burner “Breakdown” and John Denver’s “Poems, Prayers and Promises.” Both are handled with reverence, though the former’s raw emotion suits Oldham’s quiet country sensibilities far better than Denver’s sweeter songwriting.

While Phil and Don Everly perfected a vocal style based on precision, McCarthy and Oldham harmonize in a looser fashion that also helps position What the Brothers Sang as a stylistically personal homage. The album touches on a number of genres, many revolving around the country-rock leanings of the Everlys’ ’60s work, including acoustic folk numbers (“Empty Boxes”), a lively take on Jackie Edwards’ “Somebody Help Me” and balladry more firmly grounded in the ’50s (“So Sad”). Except for “Devoted to You,” which parallels the Everlys’ version more closely than any other song on the album, these recordings favor the serendipitous combinations of Oldham’s distinctively reedy voice and McCarthy’s powerful vocals – her voice an instrument that alternates between fluttering lightness, boisterous volume and tones almost inseparable from Oldham’s as the song demands it. The combination is consistently a lovely one, and arguably more dynamic than the Everlys’ own trademark harmonies.

McCarthy and Oldham have recorded these songs with such obvious sincerity that What the Brothers Sang is hard not to love. It’s a project devoted to reminiscing, a chance to share the fondness these two artists have for the Everlys’ work with another generation, delivered in a style of heartfelt standards. Even if the songs aren’t all that familiar, it’s easy to hear why they should be.