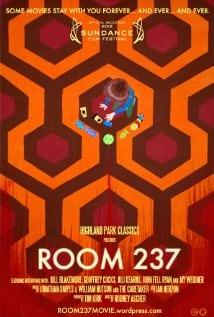 Stanley Kubrick’s The Shining is my favorite film that I don’t actually care for all that much. The director’s stab at a horror film is a feat of design and a fumble of human emotion, completely losing the perversity of human primal emotion that fuels Stephen King’s original novel. It’s artfully made and yet devoid of feeling, entirely falling prey to Kubrick’s trademark chilliness, a quality that may work wonderfully when applied to the cryptic vastness of space in 2001: A Space Odyssey or the futuristic satire of societal ills in A Clockwork Orange, but it is too at odds with the needs of this madness-fueled splintering of domesticity. Even still, I find the film endlessly fascinating, both in the stories about the hellishly protracted shoot (it took more twice as long as scheduled to complete production, and different sources claim that at least two different shots required over a hundred takes before Kubrick was satisfied) and in the fervent devotion it inspires among certain viewers. It’s the latter that is the subject of Rodney Ascher’s new documentary, Room 237.

Taking a slow, measured approach, Ascher traces the theories about the meanings embedded within The Shining with a small group of ardent advocates for the movie’s hidden intricacies. Early on in the documentary, one of the interviewees hits on the likely genesis of this broad-based plumbing of the suspected depths of The Shining: the film was not very well regarded upon its original release. This led all manner of self-anointed cineastes to keep sifting through the layers of the film, convinced that a genius like Kubrick couldn’t have gone through an extended, arduous filmmaking process only to emerge with a mundane misfire. Initial misgivings about the finished product gave way to certainty that half-glimpsed background details, perhaps first spotted during the umpteenth viewing on a new-fangled VCR, were the key to unlocking Kubrick’s grand thesis. Everyone thrust aside the curtain and found a different sort of shaky wizardry.

Some of the theories don’t seem all that bizarre, such as the notion that the film is an extended metaphor for the oppression of Native Americans, a premise that is, after all, supported by the actual text of the film (the haunted Overlook Hotel is “supposed to be on an Indian burial ground”). Ascher smartly moves from basically plausible unpackings of cinematic themes to wilder and wilder flights of film school fancy, turning over the microphone to those who claim to see a meaningful minotaur disguised as a skiing poster, who get apoplectic about the presence of an “impossible window” in a hotel office or who cipher out significant numerological meaning from the plates on different hotel room doors. For me, it peaks when an individual sincerely breaks down the ways that The Shining is Kubrick’s sly confession that he conspiratorially helped fake the footage from the moon landing. It’s a completely nutty idea, of course, although it is sort of weird that Danny is adorned in that ugly Apollo 11 sweater.

As an assemblage of crackpot analyses, Room 237 is definitely entertaining, even if Ascher’s lean approach wears thin across a full-length feature. Instead of talking-head interviews, the subjects are present as audio while supporting footage from The Shining plays, sometimes in excruciating slow motion to emphasize the way figures pass through Kubrick’s frame. It begins to feel less like a separate piece of art and more like a film class in the crazy house that might never end. It may be about The Shining, but Room 237 is sometimes almost overly dependent on the earlier film, layering on footage from it (and other Kubrick films to help fill in the gaps in a manner that’s a little too cute) to the point of near tedium. It also could have benefited from a few contrasting voices, those who might have argued for simpler or even less admiring readings. Instead, Room 237 plunges into the complex hedge maze of imagined symbolism a tad too wholeheartedly. Myopia comes in many forms, and sometimes it can even trip up a documentary about myopic viewers.