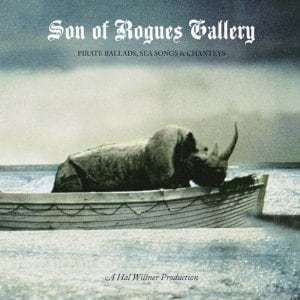 [xrr rating=3.0/5]Remember when Pirates of the Caribbean was only a theme park attraction? Me neither. Pirates have long captivated our collective imagination, inhabiting both villain and antihero roles in various forms of storytelling since they first roamed the high seas. Hell, they’ve even been used to sell knock-off sugar cereals and announce the impending arrival of an animated, pants-wearing sponge. But pirate-philia reached all time highs this past decade after the success of 2003 theme park ride film adaptation Pirates of the Caribbean: The Curse of the Black Pearl. Johnny Depp and company have raked a fine booty from the popular franchise’s unceasing sequels (the fifth installment is in the works for 2015), but Depp and Pirates director Gore Verbinski aren’t content to merely beat a dead horse on the silver screen. In 2006, they also embarked into music by producing a compilation of notable pop and folk musicians with their own takes on swashbuckling balladry.

Given the market for all things pirate, another voyage into musically perilous waters was as unsurprising as “X” marking the spot, and once again we have Captain Jack Sparrow and his mateys to thank for another lengthy compilation–Son of Rogues Gallery: Pirate Ballads, Sea Songs & Chanteys. This sprawling two-disc, 36-song release taps the talents of the usual shipful of scoundrels (Tom Waits, Iggy Pop, Nick Cave, Shane MacGowan, even some backup contribution from Depp himself) along with other raspy voices that make sense (Patti Smith, Michael Stipe, Robyn Hitchcock). There are some surprises (Macy Gray, Tim Robbins, Anjelica Huston, some god awful techno by Todd Rundgren) and a handful of mostly annoying spoken-word tracks. The result is as ragtag as the subject matter would suggest, but there’s some gold here for the plucking.

The album starts particularly strong and mostly loses steam as it goes (partly due to its sheer length). Heavily Irish-accented vocals slurred forth from MacGowan on “Leaving Liverpool” kick off the album with a raucous start. Hitchcock wishes he was cabin boy on a man-of-war on “Sam’s Gone Away,” and Sean Lennon adds one of the more beautiful whiskey-infused tunes with “Row Bullies Row.” An overly growly Tom Waits basically caricaturizes himself while Keith Richards mostly fades into the background in “Shenandoah.” Iggy Pop sings along to a squeezebox in the glorified limerick “Asshole Rules the Navy,” while Nick Cave and Warren Ellis support a snarling Shilpa Ray on “Pirate Jenny.”

The collection would have benefited from only releasing disc one. The main highlight on the second disc is the infectious duet “Rio Grande” sung by Stipe and Courtney Love (who adds dusky-voiced saltiness to Stipe’s sweet). Kembra Phfaler’s creepy and surreal “Barnacle Bill the Sailor” deserves honorable mention. Robbins and Huston are thankfully shoved toward the back, as are the spoken-word tracks that tend to really wriggle under the skin. And again, it’s hard to exaggerate how terrible Rundgren is with his pirate-on-ecstasy-with-glowsticks track “Rolling Down to Old Maui.” Suffice it to say that even self-parody on his part (Swig the Rum All Day?) would have been leagues better.

Son of Rogues Gallery features enough hidden treasure to be worth the listen, though you’ll want to whittle the tracks down to a custom playlist of about a good dozen or so. And so goes another installment of pirate love: some hits, some misses and plenty of yo-ho-hos.