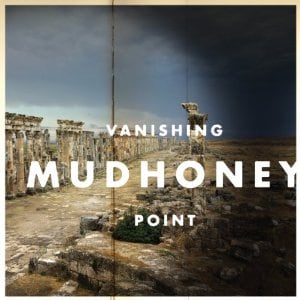 [xrr rating=4.25/5]In listening to Mudhoney’s ninth LP, Vanishing Point, there was one thought that kept pestering me, popping up like a zit: How the hell is this band still so damn good? How have they remained so consistent over the past few decades, withstanding all the trials and tribulations that crippled the majority of their peers and successors? Maybe it’s due to the fact that they found their niche and became the kings of it, rather than getting grandiose and trying to appeal to a larger demographic by watering down their authenticity.

When it comes to a Mudhoney record, you know exactly what you’re getting. Yet with each release, their sound has grown. Grown, but not truly matured. This is meant as a positive, not a knock. The quartet is as snotty and impudent as when they started. When it comes to rock musicians grappling with age, there are a few routes they can take. They can refuse to adapt and wind up playing greatest hit setlists at county fairs and casinos, appealing strictly to nostalgia. They can morph into boredom incarnate, yawning into the microphone and making increasingly insipid records chronicling domesticity and how much they love their kids, passing off family photos as album art. They can outright own their tooth-lengthening, refusing to grow complacent by reinvigorating themselves and pushing their musical boundaries to become legacy artists. Or they can do none of that and become the hard-to-qualify anomaly, the band that flat out doesn’t give a shit about aging with grace, maturing or playing to the finicky whims of the populace, the group that retains its integrity by playing for itself. Mudhoney has always fallen into the last camp, and with Vanishing Point they are once again offering a defiant “fuck you” salute to the notion that they’re getting too old to rock.

Yet none of this talk of Mudhoney being consistent is to say they’re stale or content to regurgitate the same old thing. Vanishing Point sees them apply significant jazz elements into their paradigm of fuzzed-out garage rock, injecting irregular rhythms and drum patterns into their miasma. Album opener “Slipping Away” begins with Dan Peters doing a frenetic Gene Krupa-style workout on the drum kit, joined by Guy Maddison’s rumbling bass before a slinky guitar line sears through with the effect of a lightning bolt splitting the firmament. About the midpoint of the song, the tempo abruptly drops before exploding back as vocalist Mark Arm lets loose his patented primeval howl amid all-out pandemonium. Later, with “What to Do with the Neutral,” a walking bass line accompanies more jazzy percussion as Arm recites some spoken-word lyrics. Come the chorus, the steady foundation segues into a guitar feedback haze in typical Mudhoney fashion.

Rhythm section aside, the defining characteristics of Mudhoney’s sound remain, as always, the unmistakable interplay of Steve Turner and Arm’s guitars and Arm’s sneering, Iggy Pop-ian voice. The guitars still churn out a tapestry of distortion weaved on top of more distortion, the feedback vibes crawling over one another for dominance. The guitar strings sound like they’re soaked in lighter fluid or that they’re springs being uncoiled, as though the dueling guitarists are using them to garrote the instruments they’re affixed to. For a soundtrack to a night spent sweating out a fever, wrapped in hallucinatory nightmares, you could scarcely do better than the unholy sounds Turner and Arm conjure.

Apart from his rhythm guitarist duties, Arm’s pipes still rank him as one of punk’s finest belters, his stockpile of bile not having depleted. As a lyricist, he’s developed his craft without losing his muse, spitting conversational cynicism that is more darkly humorous than bitter in his observations (the pissy title of “Douchebags on Parade” says it all). Across the record’s 10 songs, he routinely drops nuggets that begin as clever turns-of-phrase but end crudely (see: “Sing This Song of Joy” with “The world was your oyster/ And man, how you loved to shuck/ You twist that knife/ But deep inside you had to know that you are fucked”). Subjects arousing his ire range from the cultural obsession with the bigger-better-best, awful wine and estranged hangers-on. “I don’t need no Magnum/ A snubnose will do just fine/ And I’ll take G.G. Allin/ Over Long Dong Silver anytime,” he sings in “I Like it Small,” backed by hammering keyboard notes and a choral chant of deranged cheerleaders reciting the title. On the breakneck assault of “Chardonnay,” Arm delivers his disdain with a cracking yawp and witty one-liners: “You’re the drink that launched 1,000 strippers/ You’re the soccer mom’s favorite sipper/ Well, I can’t think of nothing sicker/ Get the fuck out of my backstage/ I hate you Chardonnay.” The to-the-point putdown of “I Don’t Remember You” finds Arm brushing aside some pissant as drum rolls and female backing vocals push him on to the dénouement denouncement of “I don’t care if you think I’m a prick/ It’s clear to me you’re the same piece of shit/ Who used to hang around way back when/ This what I’ll say if I see you again/ I don’t remember you.”

So is Vanishing Point a magnum opus for Mudhoney? Of course not, but they’ve never been the type to shoot for masterpieces. The long and the short of it is that it is the latest in a series of offerings by the band that stands as the torchbearers of dirty, grimy, knee-to-the-balls rock. They’ve never been the most popular group, and Vanishing Point won’t do anything to change that, but the legitimacy of music as a whole is kept in line by Mudhoney’s continued existence.