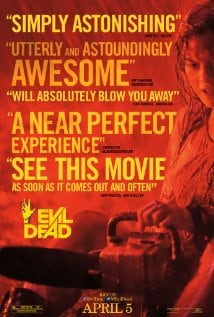 [xrr rating=3.25/5]Despite its modest, low budget roots, Sam Raimi’s 1981 Evil Dead remains a cultural touchstone in the horror canon. Though eclipsed by two better-funded, more comical and plain better sequels, Evil Dead put Raimi on the map. Flash forward 30 years and we’re finally seeing an Evil Dead remake. Let me tell you this: it’s a hell of a lot better than the crappy movie Raimi directed himself this year.

But the original Evil Dead isn’t even a great film despite what the howling hoards of fans would tell you otherwise. The 22-year-old Raimi was operating on a shoestring budget with shitty special effects, a leaden cast (save Bruce Campbell) and a script that pretty much sucked. All that people remember is that a tree rapes some girl. In fact, Raimi’s own Evil Dead 2 itself was a glorified remake. So with nothing more than a legend to debunk, the deck wasn’t really stacked that high for newcomer Fede Alvarez to fuck up with this newest version.

Well, Alvarez may have produced the most fun horror film since last year’s The Cabin in the Woods, essentially telling the same tale without the meta subplot winking out at you. Once again, five young people gather at a deserted cabin, awaken a malevolent force and get picked off one by one in the most gory of fashions. Let me say this: I walked into Evil Dead planning to get some food after it ended. I walked out with my stomach officially turned.

Alvarez doesn’t spend much time with introductions, lurching right into the gore as the young cast (led by Shiloh Fernandez and Jane Levy) unwisely pulls the cork out of hell, reading incantations out of an evil book, despite repeated warnings, and spilling its demonic contents all over the place. Faces are sliced off, eyes punctured with hypodermic needles, arms severed with electric meat slicers. You will look away. But Alvarez dismembers his cast with a demonically funny sense of brio. It’s gory without being horrifically terrifying.

Despite its fast and furious sense of fun, Evil Dead is less than perfect. A hokey prologue doesn’t make much sense as Alvarez introduces a host of characters who never return in the film. But the biggest detriment here is that there really is no Ash (Campbell’s character in the first films) to cheer for. Instead, Evil Dead slides into convention by the time it reaches its bloody conclusion.

The best horror films find a way to subvert the genre, whether they sadistically deconstruct its tropes (The Cabin the Woods, Scream) or bring something utterly terrifying to the table (The Shining, The Descent). What separates the original Evil Dead from other horror flicks is that it moves away from the idea of a Last Girl and allows Campbell to play the role of Last Boy. If you’ve seen a good number of horror films, you know that it’s invariably a woman who makes it to the end. Once again, Evil Dead appears to walk away from that notion…until it doesn’t in a anticlimactic move that not only ramps up the clichés but merely exists because the male lead here (Fernandez) isn’t especially exciting.

But that’s just one letdown amongst the torrents of blood that will rain down upon you in this very swift 90 minutes. Cast off all fear of it ruining a film that wasn’t very good to begin with. And don’t eat before you go. You’ve been warned.