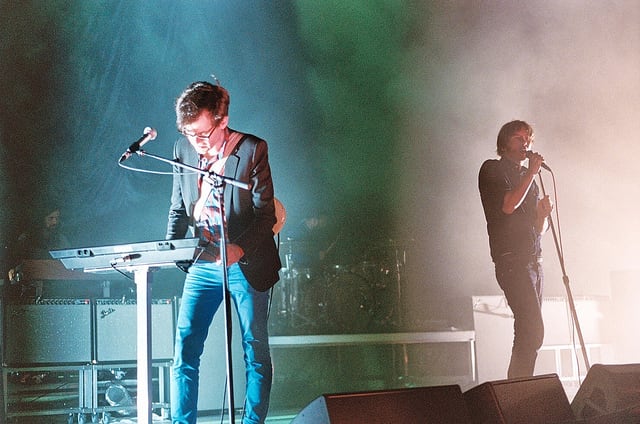 It’s always a risk to tour in support of a new record before said album has been released. While some concertgoers enjoy hearing unfamiliar songs in a live setting for the first time, many more take pleasure in singing along to familiar ones. And nothing excites a diehard fan more than hearing a particular deep cut from a favorite album from years ago. Writing the most effective setlist is a balancing act. Playing only hits can be seen as pandering to the Greatest Hits-buying-only crowd, while concentrating solely on the new record can be selfish, a ploy to move CDs or not giving the people what they want.

While Phoenix did play a good deal of still-unreleased album Bankrupt! at their Portland show, the band also peppered the setlist with well-loved songs from their last two (and most commercially viable) records. Not that playing all-new material would have been that tragic. One quickly realizes there is a certain formula to a Phoenix song.

Every band has its flavor and it’s easy to pin down the anatomy of a song by Thomas Mars and company. The band opened the set with new single “Entertainment,” the bouncy new pop confection that features all the hallmarks of a Phoenix song: the propulsive tempo designed to get folks popping those spring-loaded Crystal Ballroom floors, a heavy drum beat surrounded by lacy synths and a Mars vocal that stutters and repeats the same word or phrase over and over (this time around it’s “low” and “long”). Sometimes I wonder if Raymond Babbitt had a hand in composing lyrics for Mars.

The song kicked off a frolicking 20-song setlist, quickly followed by the one-two grab of “Lisztomania” and “Long Distance Call,” a two-pronged assault that ensured the pop hooks sunk in deep and for the duration. The sold-out crowd responded in kind, waving and singing along as Mars presided from the stage, practicing his big rock star moves with aplomb.

Bill Murray once said that the French know everything about popular music except how to pull it off. Without prior knowledge, it is impossible to see or hear anything Gallic in a Phoenix performance. Do they transcend Murray’s condemnation or are they just so scrubbed clean of Franco influence that they actually fulfill the actor’s portend? Or maybe Mars is just putting the monoglots among us to shame with his perfect use of English?

As the setlist bounced between tracks new and old, Mars clung to his mike stand and sang his little heart out. “Girlfriend,” “Lasso” and first-set-closer “1901” drew the loudest applause from the audience, mainly because people could sing along to them better than new tracks such as “Drakkar Noir” and “Chloroform.”

Honestly, the most startling moment came at the beginning of the encore where Mars performed a stripped-down acoustic version of “Countdown.” The actual fragility and calm transcended the homogeneity of the rest of the set and the disquieted crowd seemed unsure of what to do with a downbeat Phoenix. It didn’t last long. Next came “Don’t” and “Rome” and Mars went out crowdsurfing. But that taste of something different could be what’s next for Phoenix if the formula ever becomes stale. It could be something good.