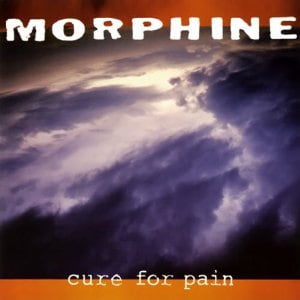 Though 1992’s Good served as Morphine’s introduction, Cure For Pain brought them to a new level and offered their first fully-realized album, arriving as an anomaly, almost entirely forsaking that most ubiquitous instrument of popular music, the guitar. In the record’s fusion of jazz and alt rock and Sandman’s lyrics of beatnik poetry, the group’s closest influences seemed to be John Coltrane and Jack Kerouac, a far cry from Nirvana championing the Pixies and Big Black or Pearl Jam’s lauding of the Who and the Ramones. Mark Sandman, with his auteur-like approach to Morphine’s sonic palette — “implied grunge” as he cheekily referred to it on at least one occasion — was in his early forties when Cure For Pain dropped, giving Morphine a level of maturity and sophistication that further distanced the band from their angry, twentysomething peers. These various components of their quirkiness, showcased throughout Cure For Pain, built Morphine a cult audience, one composed of music aficionados looking for something distinct from the pack. By the same token, their idiosyncrasies prevented Morphine from hitting the big time, which cyclically boosted their fan base’s devotion.

Opening track “Dawna,” an instrumental of sparse saxophone notes, sweeps like dark clouds slowly rolling across the sky, the audible equivalent of the album’s artwork of purple thunderheads enrapturing the light. Just as the brief tune fades away, the roiling rhythm of Sandman’s bass in “Buena” breaks through the firmament. Sandman moves to the front of the stage, all cocksure swagger as he intones lyrics pregnant with menace and temptation, changing perspectives as the enticer and the seduced. “I know some people/ Want to make you change/ Well I, I know how/ To make ‘em go away,” he sings before declaring the purposefully vague, “Buena” is the panacea to whatever ails you, delivered to you from the devil’s hands. With the verses composed merely of Sandman’s voice and bass and Jerome Deupree’s shuffling percussion, it is not until the transition to chorus that Dana Colley’s sax bubbles up, going full on freak-out as each refrain ends. “Buena” still stands as Morphine’s signature song, it being the most accessible distillation of the band’s aesthetic.

The more subdued “I’m Free Now” dials things back, Colley’s saxophone cascading in an out as Sandman recites a litany of his failings in a near rap rhythm. He alternates between being guilt-riddled and trying to console himself with all of the doors that have opened to him in the wake of a relationship’s ruin: “I’m free now/ To direct a movie/ Sing a song/ Or write a book about yours truly/ How I’m so interesting/ I’m so great/ But I’m really just a fuck-up/ It’s such a waste.” The delusion in the verses collapses to regret in the refrain, the drums ratcheting up the turmoil in Sandman’s voice. “I’m Free Now” also provides a counterpoint of vulnerability to the confidence Sandman displayed in “Buena,” his Achilles heel being a woman. Throughout the record, women stand as Sandman’s muse, at times manifesting in specific named identities like Candy, Mary and Sheila. As a result, each song is a brief narrative of the female characters’ varying effects on the narrator. Whether they’re fictional or autobiographical is irrelevant as the vignettes are conveyed with such spellbinding lyricism. Take the imagery in the opening lines of “All Wrong” for example: “She had black hair like ravens crawling over her shoulder/ All the way down.” These are lines that would do Ginsberg and Kerouac proud.

The musical tones, and different guises Sandman slips into for each song’s story, remain fluid throughout, and, despite the minimalist ingredients, the album never wanders into boring or repetitive waters. Answering the up-tempo (but still low-end) rockers “Thursday” and the surrealism-laden “A Head With Wings,” there are the sexy slow grooves of “Let’s Take a Trip Together,” the haunted “Candy” and the ballad “In Spite of Me.” That last tune is the oddest of the bunch, ironically because its primary instrument is an acoustic guitar, delicately plucked and delivering a sweet melody. Sandman’s voice is a serpentine whisper, his intent ambiguous as to whether he is being sincere or cynical in remembering a former lover: “Proud to have known you for the short time that I did/ Proud to have been a step upon your way/ Proud to have been part of your illustrious career/ And I know you did it all/ In spite of me.” Colley’s saxophone is absent, as are the drums; for most other bands, this would be the most benign number of the set, but as it so drastically breaks Morphine’s paradigm, it stands as Cure For Pain’s oddball track. Conversely, it is probably the song that most draws attention to the guitar’s absence from the rest of the record. The guitar is so unnecessary in the Morphine arsenal because Colley’s saxophone fills the role the six-string would typically occupy, playing anything from searing solos to laying the melodic bedrock to basic riffs.

“Cure For Pain” is without a doubt the best song on the record, the one that defines the mood throughout and sums up the Morphine ethos. A slice of existential awareness, the narrator reflects from a near objective point-of-view on the ennui of the human experience. He seeks answers and a balm from the suffering of conditioned existence: “Someday/ There’ll be a cure for pain/ That’s the day/ I throw my drugs away,” Sandman croons in a voice radiating from brick walls, the drugs metaphorical for whatever it is that affords solace, be it religion, academics or property. Sandman’s bass springs and pulls sinuously and Colley’s saxophone sways lethargically, channeling the tired state of mind of one wandering aimlessly through the world. Between verses, the sax rises to the fore with a teased solo, before erupting at the end after Sandman issues the simultaneously defiant and accepting, “I propose a toast/ To my self-control/ You see it crawling helpless on the floor.”

After Cure For Pain, Morphine released three more albums, all of them exceptional. Despite the rather limited resources they had to work with, the trio never fell into a pattern of repetition. They remained innovative, challenging themselves by pushing the limits of their noir sound and incorporating new instruments to add textures to it. Sandman’s death at age 46 in 1999 brought the band to a close, but their legacy has endured in the form of several bootlegged releases and official pressings of B-sides and best-of compilations, as well as their inclusion on numerous soundtracks. Despite this, though, it remains difficult to gauge their influence on the bands that came after them. Morphine remains a band apart, a group that could have originated at any point in rock history and sounded exactly the same. They are the quintessential nocturnal band, the night itself serving as an instrument in their makeup.