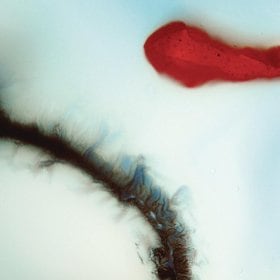 [xrr rating=2.75/5]The label “electronic soul,” one that Londoners Luca Santucci and Ben Fitzgerald have applied to their duo project Stubborn Heart, makes perfect sense as a descriptor for their music. From start to finish, the pair’s debut self-titled record, released in the UK late last year and in the U.S. last month, is full of authentic passion. Vocalist Santucci sings naked lyrics about heartbreak, loneliness and emotional instability against a backdrop of pop ‘n’ hiss grooves, trembling strings and deep, low-frequency synths.

While listening to Stubborn Heart is an impressive visceral experience, one is left with the feeling that the duo has lots of room for growth in the songwriting realm. In particular, the album’s lyrics, while heartfelt and seemingly sincere, lack artistic refinement and originality. Santucci and Fitzgerald have a penchant for couplets (“Sure as day follows night/ It’s hello, then we fight,” “I’ve had too much to drink/ I’ve had too much to think”). This rhyming technique isn’t bad in and of itself, but gets tedious when it is virtually the only scheme employed. The lyrics are also sometimes plagued by juvenile sexuality (“You’re my flower/ Let me pull at your petals”) or sound like too-literal text message transcriptions (“Don’t get angry/ I’m not trying to be rude/ Are you hungry?/ I was about to grab some food”). After a while, we long to hear Santucci sing about something other than troubled or failed relationships in literal terms, if only for variety’s sake.

The album’s lackluster lyrics are occasionally redeemed by punchy bass lines (“Penetrate”), catchy melodies (“Starting Block”) or meaningful distortion (“Interpol”). Sometimes the pair’s busy production style gets in the way of the intended message, though. The lyric, “I can do better/ You can do better/ We can do so much better than this” rings true, but the naked emotionalism is lost amidst a sea of cheesy electronic hisses. It’s not surprising that Stubborn Heart has been compared to other electronic-oriented acts such as SBTRKT or the xx, though the duo could benefit from incorporating the principles of space and minimalism more associated with these other artists.

Stubborn Heart is at their best when they keep the production relatively simple and the lyrics honest and direct, yet subtly poetic in their construction. “To Catch a Spark” succeeds as a narrative about an alienated, troubled young woman who eventually, it is implied, commits suicide. The story’s emotional potency resonates because the sounds supporting it are purposeful and consistent with the tone of the lyrics. Lead single “Need Someone” tells a story through the music itself, with a collage of pianos, metallic synths and Santucci’s Thom Yorke-like falsetto vocals floating in and out of the texture. These two tunes, and certain moments of others, point to all that Stubborn Heart could eventually be. Their first LP might not be fully realized, but there’s plenty of hope for the future. Their hearts are in the right place.