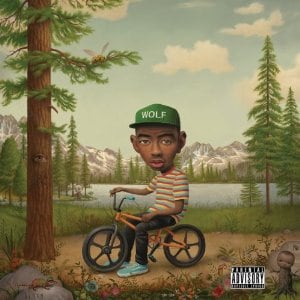 [xrr rating=3.75/5]Just as Ice Cube once dominated the fall and Rick Ross set the tone for summer, it seems Odd Future have taken up the duties of setting off the spring season with a release sure to capture the vibrant energy of new warmth beginning anew. It’s fitting, as the group’s rise over the past three years has maintained the exciting, visceral, youthful energy missing from hip-hop since the Lil Bow Wow/Lil Romeo era determined rapping teenagers were to be relegated to marketing their music to children instead of making some of the greatest albums in the hip-hop pantheon. Odd Future’s leader, the now 22-year-old Tyler, the Creator, is back with his third solo album Wolf and while his sense of humor hasn’t particularly matured, his growth as an artist is astronomical.

One of the oft-repeated harshest criticisms of Tyler’s 2011 sophomore album Goblin was how minimal the growth was between it and his debut, 2009’s Bastard. With the albums being released less than a year and a half apart, it could be argued the expectation for Tyler to immediately live up to the Odd Future hype ranged from unfair to impossible. Luckily, Wolf manages to show the first signs of fulfilling that initial promise, with lush soundscapes and innovative melodies that both channel Tyler’s influences and cement his signature sound into its strongest incarnation yet.

The most notable of such influences are Pharrell of the Neptunes/N.E.R.D. (who guests on “I.F.H.Y.”) and Eminem. From a production standpoint, Tyler’s channeled a lot of what made the better Neptunes songs so infectious. As for the latter, it’s interesting how much Tyler’s approach as a rapper mimics the Shady One’s discography. Both The Slim Shady LP and Bastard were largely self-contained universes that created their own environment which, for all the listeners know, could have solely existed inside Tyler/Eminem’s head. The Marshall Mathers LP and Goblin took that outlandish character from the first album and thrust him into the mainstream pop world to wreak havoc and deal with fame. While The Eminem Show chronicled Eminem’s continued personal struggles with his successes, Wolf interestingly shows Tyler coming to terms with it. Though we do get the directly transparent Eminem-tracing in “Pigs” (which sounds uncomfortably similar to Marshall Mathers LP’s “Remember Me?”) and “Colossus” (Tyler’s take on “Stan”) Tyler does offer moments of genuine vulnerability in his relationship with his father on “Answer” and losing his grandmother on the closer “Lone.”

By his own admittance, Tyler’s the least capable of his crew when it comes to the act of actually rapping, but given his overabundance of superstar charisma, when compared to other producer/rappers Tyler can more than hold his own. Odd Future does show up sharper than ever, with Hodgy Beats, Mike G and Earl Sweatshirt reminding us why there’s so much the group has to offer as a whole, and why there’s only bigger and better things ahead for the collective. It’s rare any rap artist in any era gets a third album, but given the nuanced growth between Tyler’s previous output and now, it’s absolutely warranted. But while his musical abilities have matured, there’s still the youthful innocent tucked within “Awkward” and “Treehome95” that set it miles ahead of the nostalgia-baiting of his contemporaries. Tyler’s not interested in what made those feelings resonate with you as you came of age, he’s interested in those feelings themselves and whether with his words or production alone, he’ll get it out of you. While this album may be the last of his three “sessions” with his “therapist,” it’s a strong end to his beginning.