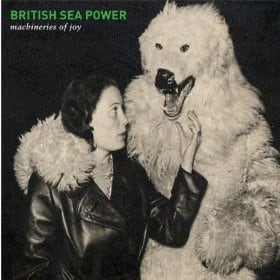 [xrr rating=2.75/5]Borrowing a title from Ray Bradbury, British Sea Power kicks off their new album proclaiming, “We are magnificent machineries of joy.” Of course, their understated delivery guts that boast of everything but irony. Much like Bradbury’s book of short stories, Machineries of Joy is a mixed bag with an introspective bent. Dreamy pop, post-punk nervous energy and surrealism give the album too many different focal points that cancel one another. That even-handed approach appears to be the band’s intention because they’ve described the album as “warm and restorative,” as if they were releasing a new ambient collection. British Sea Power mistakes blandness as relaxation, in part because they can’t resist showing off how clever they are. Since that gives them some edgier moments, much of the recording consciously alternates between lower and higher intensity, emphasizing the artistic disconnection between the songs.

For example, the spacey tune “K Hole” is bookended by more sedate tracks that bleed off the song’s tension, abandon and chaos. The lyrics follow the internal monologue of a ketamine-tripping psychonaut: “I think I took a little too much/ We may be in some trouble/ I think I fell into a K hole/ Might be best not to struggle.” The fragility of the tightly controlled verses contrasts with the wilder chorus. The indie psych feel and that exuberant chorus with its rebel yell mark the song as an outlier cut on the album. They rise from a mellow baseline to build up a strong head of steam and then purposely dampen it back down. On the front end, the title track plays with new wave influences over a Motorik beat. Yan’s detached vocals on the verses seem inspired by Bono while the chorus finds a middle ground between Joy Division and the Psychedelic Furs. It’s packed with cool-sounding phrases, but its lyrical dissociation offers little share context between the tunes. Similarly, the lush dream pop of “Hail Holy Queen” blunts the impact of “K Hole.” Sleepy and subtle, this play order seems to sabotage any progression from song to song.

If Machineries of Joy is hamstrung by a self-defeating track list, it still succeeds on the basis of a few standout tunes. In particular, “Loving Animals” creates a strong balance of chop and flow. The staccato throb of distorted guitar and chanted vocals on the verse sound like Pavement covering Brian Eno. This slides effortlessly into the expansive vibe of the Flaming Lips on the chorus. The simply phrased anti-bestiality message, “Loving animals/ I want you to know that it’s wrong, man,” could be one of the Dude’s outtakes from The Big Lebowski. The rest of the words remain fairly oblique, but the musical flow smoothes that out. The sound finally synchronizes with the disjointed lyrics and melts down into wordless swells and then repetitive gibberish before eventually deconstructing into dreamy, defocused slurs of sound.

British Sea Power comes closest to their avowed target with “Radio Goddard.” They set a gently swaying progression, like a medicated version of the Cure. The soothing vocals capture some of Robyn Hitchcock’s mellow eccentricity with lines such as, “With baby steps/ You must leave the nest/ Now brace yourself for the entertainment/ It’s time for you to do what you do best.” The vague sense of encouragement crowns this fairly passive album. That may be what they wanted from Machineries of Joy, but it all seems a bit toothless when compared to their earlier albums.