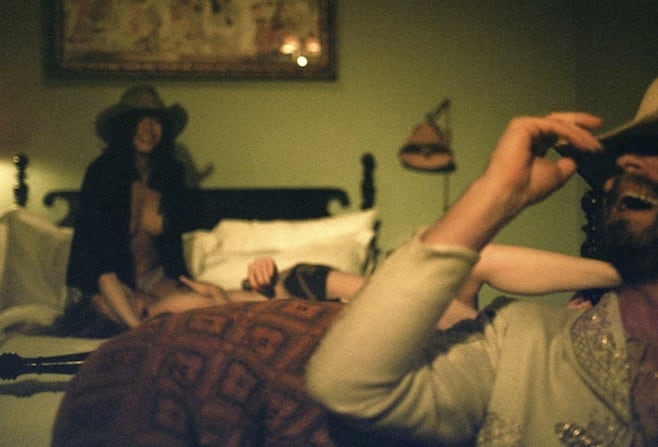 There was no shortage of ample beards in the Monday night crowd that gathered to see Phosphorescent at Portland’s intimate Doug Fir. The same went for thick-rimmed glasses, hoodies and flannel shirts. The largely uniform crowd that trended toward more male than one might expect for a heart-on-his-sleeve, country-tinged crooner, packed the venue during opener Strand of Oaks. Phosphorescent may be little more than a performing name for Matthew Houck, but he was not alone. Flanked by five touring band members, Houck made his way to the middle of the small stage around 10:15 and the band eased into the wistful twang of “Terror in the Canyons (The Wounded Master).” The slow meandering of that particular song (and its well-worn master/slave lyrics) made it one of my least favorite tracks on Phosphorescent’s well-received new album, Muchacho. But onstage, “Terror in the Canyons” made for a rousing start, the song possessing far more vitality in the live setting.

Furious piano work nearly eclipsed Houck’s soaring falsetto “ooo’s” in “Quotidian Beasts.” Over the next few songs, Houck often gestured at various sound gear and between numbers there was some static crackle, but the sound guys seemed to iron everything out by the time Houck abandoned his guitar and took mic in hand to launch into Muchacho’s first single, “Song For Zula.” He oddly wrapped himself in the mic cord, the slack black wire draping from his body in loops. With all his attention on his vocals, Houck’s voice grew even more raspy and fragile, as if it could break apart at any moment. “Ride On/Right On,” my personal favorite from the new album, suffered some renewed sound issues and otherwise was played with more crunch and less bounce than on the studio recording. Houck’s vocals were obscured somewhat by the more full-bodied instrumentation, but the song still exuded some portion of its usual raucous energy.

Houck dipped back into a couple of older tunes before leaving the stage with the rest of his band shortly after 11:00, only to quickly return solo for an extended encore that almost served as a second set. Without his band behind him, all eyes were on Houck as he strapped on his guitar and took to the mic. What followed was by far the best moment of the night, a single guitar gently strummed as Houck tenderly sang “Wolves,” from his 2007 album, Pride. The Doug Fir crowd was eerily silent as he weaved his way through the pensive ballad; the crowd only piped in for a sporadic yelp that heightened the song’s haunting lupine imagery. Even the shitfaced girl who got booted by security as she tried to climb on a railing near the back took her medicine quietly.

Before his second and final solo song, Houck warned us, “This is a long one. Hope you can roll with it,” before unfurling “My Dove, My Lamb,” an almost 10-minute track also featured on Pride that drifted on longer on the stage, but was as equally gorgeous as “Wolves.” Houck touched upon the older stuff again as his band appeared behind him once more. He closed out the show with a fun cover of the Merle Haggard and Willie Nelson tune “Reasons to Quit,” from his For Willie tribute album, followed by “Los Angeles,” from 2010’s Here’s to Taking it Easy.

Phosphorescent succeeded in shining in front of (as the ticket window guy called it) a “super sold out” crowd. Despite a few early hiccups with the sound system that lessened the impact of the early-set Muchacho tracks, his beautiful solo songs and others pulled from older records more than made up for it. There’s no argument: the homogenous crowd got what they came for.