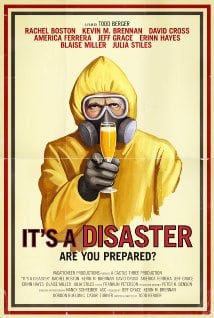 [xrr rating=4.0/5]Emma Mandrake (Erinn Hayes) may not realize that her couples’ brunches are tedious, but her guests certainly do. Soon after arriving, they start to wander into other rooms to watch the game, text friends or check their online auctions, but cell phones get no reception and both the cable and internet are out. More interested in their own petty concerns, they hardly notice that every mode of outside communication has been cut off. When the power flickers out and a neighbor in a Hazmat suit arrives to tell them a dirty bomb has gone off in their town, the best this group of upwardly-mobile thirtysomethings can do is snark a bit, then shrug and halfheartedly search for a transistor radio in the hopes of getting some news.

Todd Berger’s excellent dark comedy opens with a sepia-toned photo of a sunny beach dotted with cheerful tourist shacks, the kinds with palm fronds for roofs. As the camera pans out, it looks less like a vacation paradise than the finale of Dr. Strangelove: it’s a photo of the Bikini Atoll, the cheerful light over the beach coming not from the sun but an impossibly large mushroom cloud on the horizon. No one at the party expects such a conflagration, either real or metaphorical, as they all awkwardly attempt to interact with the sorts of almost-friends only seen at the occasional brunch.

A welcome distraction comes in the form of Tracy’s (Julia Stiles) new beau, Glen (David Cross). Tracy is known for tiring of her boyfriends quickly; she insists she always discovers the men are secretly crazy, but her friends don’t believe her. Hedy (America Ferrera) and her computer nerd boyfriend, Shane (Jeff Grace), have been engaged for several years, with no plans to marry, and a tendency to bristle when their lack of plans is mentioned. Buck and Lexi (Kevin M. Brennan and Rachel Boston, respectively) have been married as long as their hosts Pete (Blaise Miller) and Emma, but while their hosts are solidly bourgeois, Buck and Lexi are unconventional, slightly stoned goofballs who alternate between irritating and endearing.

It’s a complicated situation, and It’s a Disaster wisely chooses to focus on a series of exaggerated revelations that upset the well-furnished serenity of the bourgeoisie, rather than risk evoking any realistic sense of tragedy. The film is, after all, a fantasy about the sheltered middle classes, those living in self-imposed states of denial, who withhold communication and information amongst each other almost as sport. In their world, deception leads to a few arguments, an exciting brunch, maybe a divorce. In the real world, it leads to dirty bombs spewing radiation over an entire city. It’s only fitting that they get their first hints that their petty problems aren’t the literal end of the world when neighbor Hal, played by Berger in a terrific Polanksi-esque cameo, arrives briefly with the first substantial news they get.

It’s also no accident that the only time the phones work is when a telemarketer from Manila calls, at first unaware of the tragedy unfolding in the United States. Obviously unaffected by whatever disaster is occurring, he’s unable to give Shane any details before the line goes dead. But Shane wasn’t really looking for information, anyway; whether he realizes it or not, he merely wants confirmation of his own indulgent conspiracy theories. He hears but does not engage with outside world, at best considering it ironic that someone in the Philippines has information he does not.

All eight friends react to the growing realization that they will die together with their own versions of self-absorbed, distorted thinking. Hedy, a chemistry teacher, is the person who most knows what to expect, and her reaction is the most pure, the most frightened. Buck, meanwhile, seems to barely care. As he covers the vents in the home hoping to keep the radiation out, Hedy asks him about the afterlife. While Hedy is thinking of the litany of painful symptoms all are likely to experience before death, Buck insists that Heaven is all white robes and harps, just like Looney Tunes.

For all her grounding, Hedy still panics when she can no longer ignore reality. Though everyone becomes more honest with each other and relationships are redefined, they still tenaciously hold on to their denial and their privilege. No one muses on the fate of others, not even relatives. They easily and immediately believe that some ill-defined Other has attacked them, though truly do not care. One member of the group is a doctor, yet at no point offers any medical advice or information. Dead friends on their stoop, their corpses pecked at by some of Hitchcock’s well-paid ravens, are easily forgotten. It’s a Disaster is a comedy, but it is also a painfully pointed look at American middle class thirtysomethings and their death grip on their own bourgeois troubles at the expense of everyone else around them.