Beyond basic issues of quality, there’s a lot of distance between 1995’s Judge Dredd and 2012’s Dredd, two very different takes on the same rough-hewn comic book character. This space can be contextualized by the wildly dissimilar cultural climates which produced each film, the product of a shifting attitude toward this type of material, which peaked with the grave sanctimoniousness of 2008’s The Dark Knight. The critical success earned by its developed, morally ambiguous handling of the familiar Batman universe allowed for a serious bit of progress regarding comic book movies, granting them the right to be taken seriously on their own terms. This was a long time coming, the end result of a process that started with the early ‘00s rise of tentpole comic adaptations, spearheaded by Sam Raimi’s Spider-Man movies. But that era still produced films which offered a winking detachment from their source material, hedging to the lingering perception of these graphic stories as inherently silly and juvenile, resulting in a layer of aw-shucks innocence plastered over basic treatments of potentially complex allegories.

Yet the 2000 A.D. series that spawned both Judge Dredd and Dredd, set in a scarred post-apocalyptic world where the remnants of humanity huddle together in crime-infested mega cities, has nothing to do with heroism or childish simplicity. It’s a story of overwhelming degradation, in which a harried populace has surrendered the majority of their civil liberties, pushing power into the hands of a few ultraviolent, status-quo-preserving enforcers. This bleak setting makes the 1995 version—with its comic-relief sidekick, old-fashioned one-liners and flippant tone—a disaster from the get-go, its fiasco status further expanded by kitschy Gianni Versace costume design and cartoonishly overbearing art direction. Employing an unpleasant mixture of grating zaniness and gratuitous violence, the film tries to soften its nightmare scenario by padding it under a pile of asinine touches, a bit of equivocation which makes it a failure on both counts. 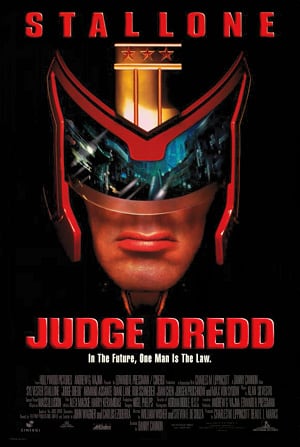 Released to a world that could accept this sort of source material without having it passed through a cartoon filter, the recent Dredd feels honest and appropriately coarse. In establishing its cruel setting, it doesn’t need to couch it in a haze of goofy effects, like the idiotic comic book art sequence that opens Judge Dredd, or its hulking, action-figure inspired costume design. Vicious and amoral, Dredd doesn’t aspire to any specific program of prestige, lessons or values. It’s proudly vulgar b-movie trash, an apparent celebration of violent vigilante justice that ends communicating deeper ideas without aiming for any obvious message.

By virtue of this approach, the seemingly fatuous Dredd ends up engaging the core themes of fascism and violence on a much more adult level than its predecessor, while simultaneously succeeding in a visceral sense as a solid, unsparing action flick. Both films establish the future institution of the judge, a steroidal police officer with the added power to pronounce verdicts on the criminals he nabs. The earlier film immediately responds to the knee-jerk urge to distance itself from this clearly horrifying system, passing Sylvester Stallone’s Dredd through a tedious wrong-man scenario, where he learns that the law isn’t as clear-cut as it initially seems, a process that purifies him and teaches him how to forgive (and also how to love!). However, in working up this redemption narrative the film loses the entire thread of what it’s supposed to be about in the first place, so wrapped up in the standard flow of plot mechanics that it ends up defending the fascist structure it seems to initially be decrying.

This is a huge waste (a running theme in this maximalist, ill-conceived production) since the filmmakers expend a tremendous amount of energy and budget building up a collective well of Nazi-influenced iconography, from perched screaming eagles to black-clad storm troopers, placing the action on outsized sets that recall the monstrous mechanical society of Metropolis. Yet rather than have its absolved hero begin to understand the ill-conceived brutality of his world, he ends up having to rescue it from an even more wicked administration, one grounded on a platform of eugenics and unabashed wickedness (courtesy of lone bright spot Armand Assante, who fittingly hams it up as a ridiculously sinister villain). By attempting to graft a simplistic narrative of forgiveness onto an elaborately damaged dystopia, the film gets itself into even deeper trouble than its confused tone would initially suggest, missteps which assure that it’s not only stupid, but also ethically poisonous, providing a seemingly unintentional apologia for a violent police state. 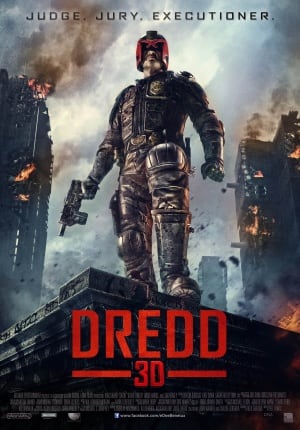 Taking a much more basic approach, Dredd operates at a distinct remove from the fascist system at its core, offering no apparent judgment, with a static hero who learns nothing and never changes. It instead pushes all its character development over to psychic rookie Cassandra Anderson (Olivia Thirlby) who acts as an audience analogue, her fresh eyes revealing the full horror of a system that has no time to treat its criminals as human beings. The film opens with a set piece that establishes Dredd’s monstrous bona fides, wiping out a van full of criminals while engaging in the sort of widespread loose-cannon property damage that would earn hysterical reprimand from the sergeant in a standard-issue police movie. The rest of the movie is one extended scenario, loosely inspired by the Indonesian film The Raid, in which the two judges are trapped inside a gargantuan housing project run by nefarious crime boss known as Ma-Ma (Lena Headey), fighting off coordinated attacks from hundreds of crazed minions.

Dredd devotes this long stretch to a tumbling progression of gun battles and fist fights, allotting some downtime for operatic slow-motion sequences, most of them POV shots of characters under the effect of a drug appropriately known as Slo-Mo, which drags brain activity to 1/100th of its ordinary speed. By presenting its violence and brutality straight, the film doesn’t waste time making excuses for an obviously flawed system, settling for a subtler sub-textual process, specifically by highlighting the growing dissolution and exhaustion of Cassandra, who, disgusted by the callous cruelty demanded by judging, ends the film by turning in her badge. This can be seen as an inability to stomach the harsh realities that underpin society (shades of John Ford’s The Man Who Shot Liberty Valance), but in a more generous reading Dredd seems to be commenting on the moral fatigue engendered by ceaseless conflict, with a small band of enforcers pinned down inside enemy territory, a particularly potent scenario for a culture marking the 10-year-anniversary of an extended, increasingly pointless war.

The point is that neither reading is indispensable to the enjoyment of the film, which whizzes by on a visceral level while subtly communicating implicit details about the horrifying world in which it takes place. This is the exact opposite of the thundering approach taken by a juggernaut like Judge Dredd which aspires to a simplistic program of learning and transformation while actually offering nothing of the sort. This comes back to the importance of presenting subject matter on its own terms, something Dredd does, and Judge Dredd assuredly does not. By veering away from its source material, presuming to be amplifying the effect of the comic book by dumbing it down and amping it up, the earlier film ends up with a pretty sizable mess on its hands. The recent version, while seemingly much less complex, actually uses its lean-and-mean minimalism to produce a much more serious, mature and rigorous work.