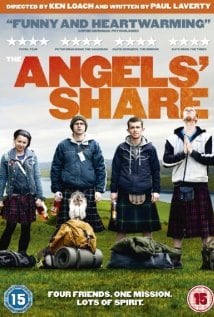 [xrr rating=3.0/5]If one had to nominate the poet laureate of the British working class film, the panel would be split between Mike Leigh and Ken Loach. But while Leigh’s movies have achieved Oscar-level recognition, Loach is often more unsparing in his vision. Whether he’s chronicling early 20th century Republicans in Ireland (The Wind That Shakes the Barley) or a rough-and-tumble Scottish teenager determined to help his mother just out of prison (Sweet Sixteen), Loach uses unflinching violence and long-winded speechifying to get his points across. Unlike Leigh, Loach can still lean too heavy on his politics, pushing his agenda ahead of plot and character in some of his more minor efforts. With his latest film, The Angels’ Share, Loach revisits many of his old themes (social inequity, the cycle of violence) while making a lightweight comedy of errors.

We meet the protagonists of The Angels’ Share as they are sentenced to community service for an array of infractions ranging from theft to violence to public drunkenness. This is a ragtag group, some hardened criminals and others simply lovable fuck-ups who don’t know any better. Chief among the group is Robbie (Paul Brannigan) who is in trouble yet again for fighting. Days away from becoming a father, Robbie is given one more chance to redeem himself before being locked up for good. Loach draws out this opening sequence, allowing us to listen to both the prosecution and defense, a seriocomic look at each crime that quickly establishes his droll sense of humor. One of the women there is on trial for stealing a macaw from a pet shop. You get the picture.

Robbie’s community service is just the beginning of his troubles. A rival group of hooligans are out for his blood. His girlfriend’s father (whom he without affection dubs “Psycho-balls”) and her uncles want him to not only stay away from his daughter but to leave Glasgow for good under the threat of violence. It’s desperate times for young Robbie and during community service, he slowly hatches a plan that will get him and his good-for-nothing friends out of trouble once and for all. During some downtime, Robbie and his pals become impromptu whisky connoisseurs. They soon hatch a harebrained plan to steal a very rare whisky and sell it off to the highest bidder.

If the plot whiffs of a lowbrow buddy comedy, you’re not too far off. But what is really is disconcerting is how The Angels’ Share devolves from a gritty Ken Loach drama replete with bloody beatings and a heartbreaking scene where Robbie is reconciled with a boy he permanently disfigured during a coke-fueled rampage, to a cutesy buddy comedy about some ne’er-do-wells trying to get rich on a heist. It is so schizophrenic that Loach allows no resolution for Robbie’s two main pursuers. They simply vanish out of the film altogether.

So what’s Loach saying here? He spends the first half of the film examining how violence begets more violence and the impossibility of breaking out of that pattern. He gives Robbie a second chance who swears that he won’t fight again. But where’s the path of redemption? In a rare whisky cask waiting to be stolen? You can see where Loach is going here. He is giving Robbie and his friends a pass, allowing them to steal from the rich (and seriously, who the fuck can afford to spend 1.5 million pounds on whisky?). I wonder if Robbie is short for Robin. And he does live in the hood…

Loach could never before be accused of making a confection, but The Angels’ Share is just that. It’s a feel-good comedy with a UK edge a la Waking Ned Devine or The Full Monty. Mike Leigh may have graduated to the wealthy in Another Year, but Loach is still down in the doldrums with his sleeves rolled up. He just doesn’t really have gravitas on his side this time around.