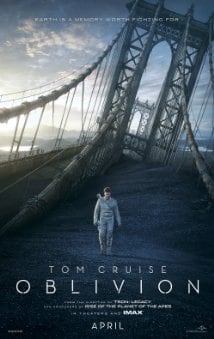 [xrr rating=3.25/5]In his current iteration, Tom Cruise has settled into the easy-lifting of an action hero. Long gone is the actor who showed nuance in late ‘80s prestige pictures such as Rain Man and Born on the Fourth of July replaced by a recurring role as Ethan Hunt and other variations of the same thing. Cruise hit his nadir late last year, starring as the gossamer-thin lead in the poorly received Jack Reacher.

In Oblivion, Cruise returns to the sci-fi action genre as Jack Harper (no relation to the above-mentioned character), taking on his most complex role since Eyes Wide Shut. Directed by Joseph Kosinski (Tron: Legacy), Oblivion is an eye-popping thriller that actually makes its audience work to piece together its twisty plot. Too bad, it doesn’t make us try harder. Playing like an enervated replicant of 2001: A Space Odyssey, The Matrix and various other science-fiction touchstones, Oblivion is alternately exciting, scary and somewhat dumb.

In 2077, the Earth has been ravaged by a war between the humans and an alien race. With the planet trashed (by natural forces since the moon has been totaled), most humans are now living happily on one of Saturn’s moons. Sixty years have passed since the destruction of the Earth and Harper is a technician who has been left behind to monitor the extrication of resources such as water.

Living in a futuristic pad with his sultry partner Victoria (Andrea Riseborough), Harper spends his days patrolling the scorched Earth, repairing patrol drones and avoiding attacks by his adversaries whom he dubs “scavengers.” Harper and Victoria have had their memories erased for security reasons but tricky reminiscences still remain. Why does Harper remember the observation deck of the Empire State Building? And just who is that beautiful woman that keeps popping up in his dreams? The answer might not be too far off when a spacecraft crashes to Earth and the only survivor is that mystery woman of his dreams (Olga Kurylenko).

As Oblivion unspools we learn with Harper that not everything is as it seems. If you are even a casual science-fiction fan, you will likely see the numerous plot twists coming a mile away. Then again the couple seated next to me kept carrying on about how “weird” the movie was and how “confused” they were. My guess is that they’ve never seen Blade Runner.

Even if you don’t catch onto Oblivion’s secrets, Kosinski does stage quite a few exciting action sequences. Harper’s drones can be quite deadly and in one thrilling scene they chase his spaceship through a tight canyon, allowing Cruise to give a maverick performance once again. But that’s not the only moment for 50-year-old action star as Cruise alternates between kicking ass and instilling his Jack Harper with an intense current of humanity.

With M83’s appropriate soundtrack and a moralistic message, Oblivion would have likely been lost during the summer blockbuster blitzkrieg. But despite a weak plot that cherry picks from Ridley Scott, Kubrick and even Chris Marker, Oblivion somehow works. And unlike Jack Reacher the film doesn’t place all its chips on its star’s charisma.