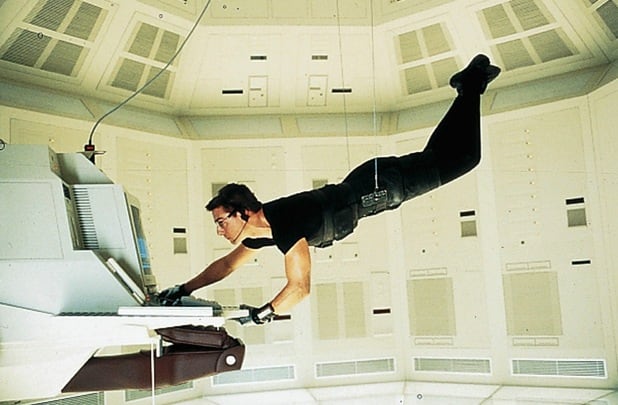 There is a strange sort of genius in Brian De Palma directing an ostentatious summer blockbuster like Mission: Impossible (1996). His easily-recognizable bundle of trademarks should fit snugly into the modern reboot of a campy 1960s spy show. The necessary action-adventure tropes required of an $80 million blockbuster fail to mesh with De Palma’s signature style, however, and the result is a patchwork of needlessly complicated and glamorous scenes, held together by some slick production values and De Palma’s undisguised contempt.

Ethan Hunt (Tom Cruise) and his fellow IMF agents (including Kristin Scott Thomas, Emilio Estevez and Jon Voight as team leader Jim Phelps) are on a mission to recover a stolen NOC list, a list of all IMF “non-official cover” agents. An ill-defined foreign concern is paying big money to retrieve this list, which will of course put all NOC agents in jeopardy. A momentary act of bravado on Ethan’s part leads to the deaths of everyone else on the team. He calls in to the agency, only to find that the NOC list was a fake and the mission was a mole hunt; thanks to his survival, Ethan is now pegged as being the mole the agency was looking for. He is disavowed by the government, but before he can leave Prague, he discovers one other agent has survived: Jim’s wife Claire (Emmanuelle Béart). The pair hire on two other disavowed agents (Ving Rhames and Jean Reno) to get the real NOC list in an extravagant plan to clear Ethan’s name and get revenge.

The plot is simple enough, and if it bogs down in details, that’s because they were never meant to make sense. This was true enough in the original show as well, such as in the second season episode “The Seal,” an obvious influence on the film. In “The Seal,” the audience is asked to believe the preposterous notion that the only way to recover an important jade artifact is to use a trained cat. In nearly every episode of “Mission: Impossible,” the IMF agents planning their mission would dutifully explain everything, never hiding that it was for the benefit of the audience, knowing that anyone still watching had cast aside any expectations of reality and simply succumbed to the style.

In De Palma’s version, however, any explanations provided are cursory, as though everyone involved was resentful of having to spend time on scenes that didn’t include at least one explosion. Moments of camaraderie are often uncomfortable in a De Palma film, a reflection of people forced into forming familial relationships out of necessity. Unlike The Fury, where the connections between people were awkward but genuine, there is no real warmth between the IMF members. 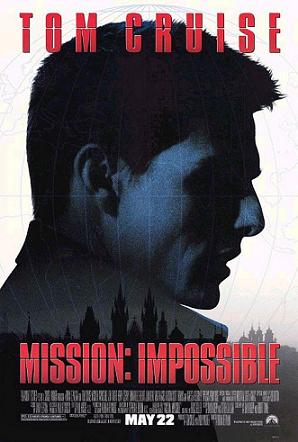 This chilliness is the first sign that not all is right with Mission: Impossible. The first half is packed with De Palma trademarks, most notably the fixation on identity. Every member of the team plays a series of roles, their true identities shaky and unexplained, hidden underneath several layers of IMF subterfuge. These are people who do not exist unless they are pretending to be someone else. Ethan Hunt is a character that inherits another layer of image distortion simply because he is played by Tom Cruise. De Palma frequently uses slightly bland male leads with over-processed good-guy reputations to great effect, but Cruise is arguably the blandest of them all, and it shows. He’s a faded carbon copy of Cary Grant in North by Northwest, but wholly sexless and without charm.

Mission: Impossible is an indulgent film, most apparent when much of the international ensemble cast is killed off within the first half hour. De Palma frequently humors himself by referencing his own films as well, such as an opening sequence that resembles Body Double, and his trademark deep focus shot used inside a ventilation shaft where Reno is hassled by a rat. There is a deep distrust of the visibly wealthy in Mission: Impossible, too, as in many of De Palma’s films. This is most apparent when the IMF team infiltrates a high-class cocktail party inexplicably held on a series of Escher-esque stairways. Everything is off-kilter both visually and emotionally, as a POV camera meanders through a crowd of curious guests in designer gowns and well-tailored formal wear, just enough of them staring to make you paranoid.

For De Palma, excess is more than a campy style. It highlights the intensity of emotions and the limits people can endure before breaking, usually in a spectacular and perverse manner. Further, the glittery facades of the visibly wealthy merely disguise the rotten truth underneath, and a government with boundless reach is not to be trusted. Mission: Impossible, however, was designed from the beginning to embody excess. It’s almost impossible to resolve the conflict between De Palma’s distrust of excessive wealth and power while he positively wallows in the freedom $80 million worth of special effects, location shots and publicity can give him.

The result is an essential hypocrisy that the film hopes we simply do not notice, though De Palma must have been keenly aware of it himself, because the Mission: Impossible he created features an undisguised contempt for the mere existence of a summer blockbuster. This contempt is solidified at the halfway point during the famous set-piece of the film: the robbery of the NOC list from an impossibly secured room. It’s a scene stolen straight from Topkapi and Rififi; it is no mere homage to the films of Jules Dassin, but completely lifted from his films, with no effort to hide that fact.

It’s an astonishing indulgence, especially for a film meant on at least some level to be nothing more than brightly-colored entertainment. Yet that aspect is indulged as well in the wholly pointless finale, a special effects extravaganza where Hunt ends up atop a speeding train that inevitably plunges into a tunnel. A helicopter, improbably attached to the train, maneuvers so precisely it nearly slices his head off. A few green screen and wind tunnel effects later, Hunt emerges unscathed, somewhat crumpled and with the exact kind of mild facial wounds that make an actor more attractive. Order is restored by the deaths of nearly every main character, and no one on either side is particularly concerned about the NOC list anymore. By the conclusion, Mission: Impossible has devolved into pure cynicism, at once both an example of and protest against the kind of bloated blockbuster monster created by an artless film industry. That it was the beginning of a Cruise-centric franchise of four films, with another rumored to be on the way, simply underlines the point.