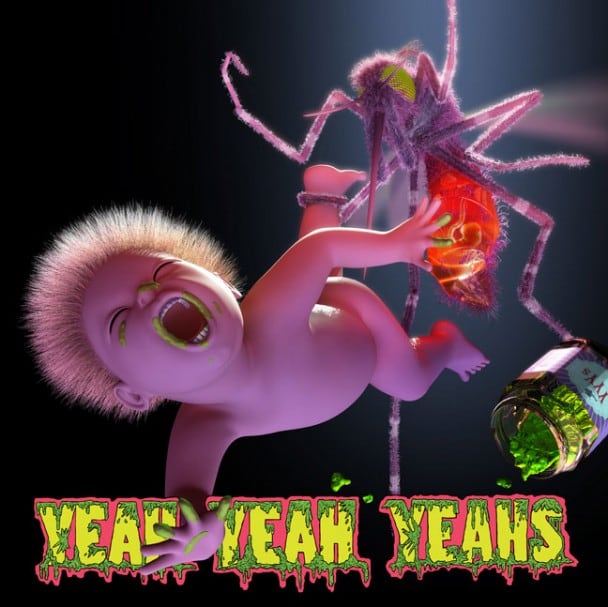 [xrr rating=3.25/5]When Yeah Yeah Yeahs debuted in 2003 with Fever to Tell, it didn’t seem very likely that they would be one of the longest lasting, most consistent bands in New York’s 2000s boom of indie rock. For one thing, NYC has been in a perpetual loop of art bands making it big, commercializing and then crashing, only to be “reclaimed” by a new generation of kids with good hair and guitars. For another, the trio of Karen O, Nick Zinner and Brian Chase played some of the most frantic, least flexible art punk of their generation, a sound that not only pushed them above their peers but also promised not to allow much creative flux. It’s telling that their major hit of the period (and thus far, career) was “Maps,” the one track that sounded like nothing else on the album. Then Show Your Bones (2006) and It’s Blitz! (2009) were released and Yeah Yeah Yeahs showed that, Fever to Tell notwithstanding, they weren’t interested in following a successful formula.

Their fourth album, Mosquito takes the lead of the last two albums, eschewing the consistency of Fever to Tell for a more mixed collection of sounds. To their credit, Yeah Yeah Yeahs are still experimenting with genre, pulling from new wave, gospel, dream-pop dub and even a light tinge of hip-hop. Despite everything they do, they still sound like themselves, no matter where they dabble. That’s partly due to the strength of their triple threat. Zinner’s jagged, Cure-like guitar lines are powerful and memorable, but rarely vary in tone. O’s vocals remain some of the most distinctive around; in the last decade, there’s been few singers that are as immediately recognizable, yet limited in range and tone. And Chase, the unsung hero of the band, keeps on as the ideal drummer: powerful, driving and always overshadowed.

As per Show Your Bones and It’s Blitz!, Mosquito opens with its lead single, “Sacrilege,” which is doubtless to become one of their most recognizable songs along with “Zero,” “Maps” and “Cheated Hearts.” Beginning almost as a ballad, with O crooning, then barking over Zinner’s downtuned guitar, it breaks into a desperate, frantic rhythm with Chase’s drum, until it unexpectedly brings in a full gospel choir to echo and then take over the singer’s vocals. It’s a brilliant fusion of the trio’s best qualities with a new element, an inspired choice that brings out what makes them so distinctive. Followed up by the restrained “Subway,” a sad, wistful track anchored to a sampled subway car clacking as a rhythm section, the album is off to a fine start.

Unfortunately, there’s simply too many unmemorable tracks on Mosquito to keep the energy going. While the dub experiment of “Under the Earth” is interesting in concept, it translates to essentially more of the same gloomy, Robert Smith-imitation that the trio periodically indulges in, just with more echo and bass. The ethereal synthesizers and beat programming of “Always” sound like Yeah Yeah Yeahs doing Beach House, which is fine…except that Beach House is around and doing it better.

There are highlights, like the James Murphy-produced “Buried Alive” which may be O at her most menacing since their earliest days and contains a deep, too brief verse by Kool Keith in Dr. Octagon mode and the title track, containing some brilliant angular guitar lines and insane buzzing vocals. Mosquito is by no means a bad album; in fact, it’s to be praised for continuing the band’s relentless pursuit of different sounds to shape themselves around. But, all things considered, the ratio of success to failure is just a little unbalanced this time around.