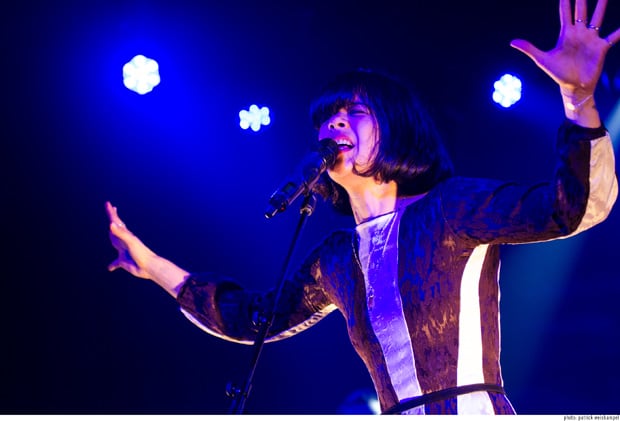 It happened toward the end of the first set. Natasha Khan, frontwoman of Bat for Lashes, sat stage left, pounding on her keyboard and reaching the emotional crescendo of one of her songs. I leaned on the monitor in front of her, absolutely absorbed, when someone screamed for help just to the left of me. The Wonder Ballroom was stiflingly hot that night with no air circulation or ventilation whatsoever. A sheen of sweat had broken out on Khan’s brow nearly as soon as the concert began. Take a step outside and it was 20 degrees cooler.

A woman had buckled under the grueling heat and fallen backwards, laying unconscious on the Wonder’s floor. Security rushed over and revived the woman. Aware of the commotion taking place just feet away from the lip of the stage, Khan cut the song short to inquire about the welfare of the fan. We helped her up; Khan passed a bottle of water into the crowd and then announced she would be moving onto the next song, since all that was left was the climax.

Throughout the 90 minute set, Khan radiated warmth and kindness. She flashed a winning smile and danced seductively. This was an entirely different performer than the one I saw nearly four years ago. Gone was the demure shyness, replaced by a Stevie Nicks mysteriousness, a performer completely in touch with her power to beguile. Dressed in a black and white striped ankle-length dress that was half Victorian murder mystery, half Alice in Wonderland, Khan was also fit of voice and put on a captivating performance (even if it did sound like she addressed us as Seattle at the show’s onset).

Drawing from all three of her records, the setlist kicked off with “Lilies” from new album The Haunted Man before bleeding into the darkness of “What’s a Girl to Do.” At times, the bass synth and drums threatened to overpower the rest of the band and Khan’s vocals, making slower tunes such as “Travelling Woman” and showstopper “Laura,” featuring only Khan’s voice and Ben Christophers on piano, more effective and clear. Faster selections such as “Glass” and “All Your Gold” also included a healthy dose of the lower end that rattled teeth and set the stomach on edge. The set careened between loud and soft moments, allowing the audience to dance and then become emotionally introspective.

The comparisons between Khan’s work with that of Tori Amos and Kate Bush are somewhat accurate as she often treads on expressive territory in her songs. Many fans around me sung with eyes closed and heads thrown back in ecstasy. Khan was playful in her stage banter, even asking us to the take the time to recognize the beauty of the Pacific Northwest and how lucky we are to live here.

Khan closed the first set with “Pearl’s Dream” before coming back to finish with “The Haunted Man” and “Daniel.” During the chant section on “The Haunted Man,” Khan held an antique radio above her head, silent while the dirge of male voices surged forth. I couldn’t wait for her to put the radio down and sing to us once more.