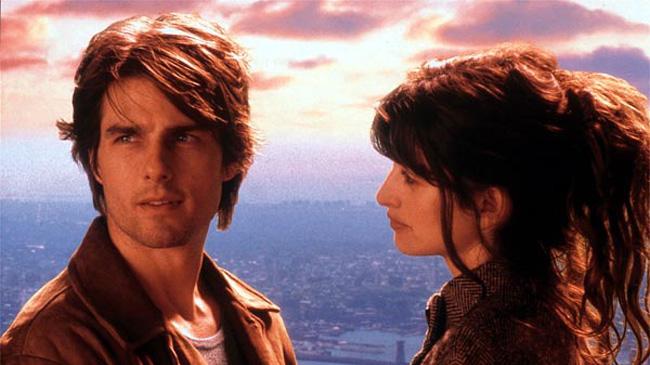 The inherent peril of Hollywood remaking a recently successful foreign film is that, unlike updating decades-old films for modern audiences, the contemporary remake can usually only offer greater accessibility to its source material through bigger budgets, more familiar faces and the elimination of subtitles. When this allows a great story to reach a broader audience, it’s a good thing. In the case of Vanilla Sky, big names like Tom Cruise and Cameron Diaz overacting in a vain attempt at profundity, and a hot director in Crowe (who’d just come off the rock-music nostalgia hit Almost Famous), sap the film of all its strained existential meaning.

The plots of both Vanilla Sky and Alejandro Amenábar’s original Abre Los Ojos are essentially identical. A filthy rich playboy has a rare night of chaste emotional connection with a woman—drawing portraits and talking about feelings with Penélope Cruz (she plays the same character in both films)—and immediately afterwards has his life turned upside-down when his jealous fuck-buddy turns all Fatal Attraction on him and ruins his face by purposely driving them off the road, killing herself. From there, the films sprawl out into puzzle boxes of reality intertwined with dreams, with identities spontaneously morphing, the playboy’s own face restored and reverted back ad nauseam, a bedroom murder (or was it?) and a convoluted cryogenics climax. 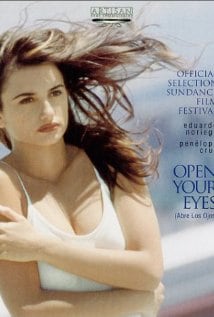 The difference is that in Abre Los Ojos Amenábar manages to weave all of these loose ends into an effective cross-genre pastiche that’s unnerving, intriguing and beguiling if admittedly far-fetched. The asshole playboy in the original, César (Eduardo Noriega), is traumatized by the illusion versus reality conundrum in which he finds himself, but is far more intellectually capable than his Vanilla Sky counterpart, David (Tom Cruise), of piecing together the mystery on his own. César’s courtship of Sofía (Cruz), a girl he has unapologetically stolen from his closest friend (Fele Martínez), is far more concise, circumstantial and realistic, making his obsession with jump-starting that same chemistry after his disfigurement all the more unsettling from Sofía’s perspective. César’s recollections of the truth, depicted in jittery dream-like camera shots similar to the shaky animation later used in the lucid-dream-themed Waking Life (2001), make for an effective level of ominous disorientation. Such moments are appropriately tense, with a traditional thriller film score that couldn’t be further from Crowe’s often incongruous Who’s Who mixtape soundtrack in Vanilla Sky. Abre Los Ojos’ rooftop resolution features far less exposition of the intricacies of the labyrinthine plot and the film as a whole earns its more outlandish flourishes.

Crowe’s approach with Vanilla Sky is to throw all nuance out the window. He essentially mirrors an identical story, occasionally using near-verbatim English translations of the original, but then cranks up the volume and intensity of all of his characters. As David, Cruise makes for a woeful protagonist. He’s a rich douchebag who has basically suffered the consequences of stringing along his attempted murderer Julie (Cameron Diaz) and reveling in the hero worship of his aspiring novelist buddy Brian (Jason Lee) when he’s not stealing his girl. His life falls apart primarily because he’s no longer handsome. As Sofía redux, Cruz is perhaps too adorable but far less believable as a real person than when she portrayed the same, yet better-written, character in her native tongue. Upon spending the unlikely sexless evening with Sofía, Cruise plays David as couch-jumpingly ecstatic and ready to turn his whole approach to life around for love. Crowe frames the film as though David is a tragic hero, worthy of our sympathy, whereas César is more genuinely a pretty boy who got his face smashed in and who may or may not be insane. 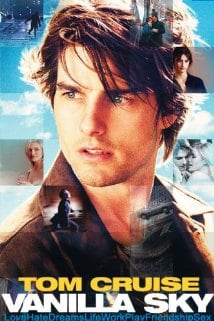 It’s difficult to truly sympathize with either film’s richy-rich womanizer, but César’s descent, with more authentic terror as Sofía’s face begins to morph into his would-be killer’s, is far more pitiable. Earlier, his dance of despair after a freaked-out Sofía spurns his mangled advances makes for a dazzling cinematic display—wearing his “facial prosthesis” mask on the backside of his head is a trippy image Crowe copied almost exactly yet still somehow failed to pull off.

And really, it’s almost impossible to overstate how heavy-handed Crowe is with the musical references. On their one night together, Sofía asks David if he’d rather listen to Jeff Buckley or Vikki Carr. David has a smashed guitar hanging behind a glass case on his wall. The annoying Life Extension cryogenics technician at the film’s conclusion points out that David and Sofía had recreated The Freewheelin’ Bob Dylan album cover in one of his illusory realities. David belts out a sedative-addled rendition of Joan Osborne’s “One of Us” as he’s wheeled into reconstructive surgery (and the guitar riff of the actual song pops up again during the jump-cut-laden freakout scene that climaxes with the sex-murder of Sofía/Julie). And then, of course, there’s the awkward soundtrack. The song choices are either too literal (Radiohead’s “Everything in Its Right Place” to open the film as David preens himself in front of a mirror), too out of place with the tone (the Beach Boys’ “Good Vibrations” when the mind-bending nature of David’s reality finally takes hold) or too self-indulgent (Crowe used his connections to get Paul McCartney to write “Vanilla Sky” specifically for the film).

Time has also not been kind to Vanilla Sky. Cruise’s heartthrob appeal has been on the decline for years as his eccentricities have bubbled to the surface, and that retroactively affects the reception of his performance here. How Cruise and Cruz briefly ended up an item after this film is anyone’s guess as their on-screen chemistry is next to nil. And the whole corporate cryogenics and suspended animation mental maze has a whiff of Scientology lunacy to it, further driven home by Cruise’s lead role. Abre Los Ojos, meanwhile (though itself an imperfect film), is effective and occasionally spellbinding. Most importantly, it now benefits from the reputation of being the much better movie on which the overambitious and hokey Vanilla Sky is based.