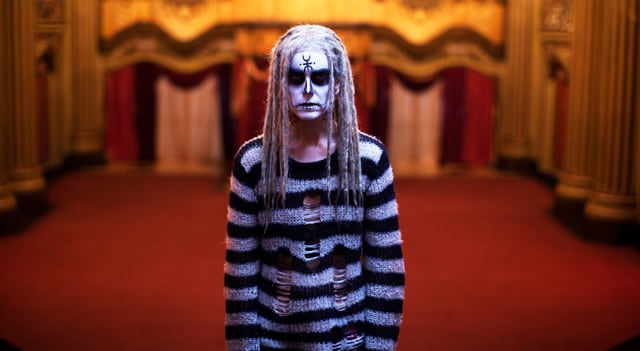 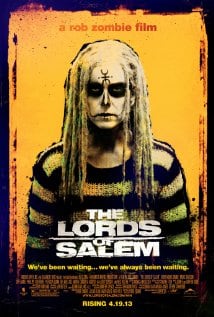 Artificial, yellow street lamps casting their glow over a car windshield in modern Salem, Mass., abruptly becomes natural firelight when Rob Zombie jumps back in time to the town during the time of the witch trials. He depicts a coven of impressionable young hedonists and withered crones chanting and disrobing as they dance around a bonfire calling their dark lord. It is a ridiculous sight, backed up both by the title-card freeze frame on a goat clearly indifferent to the task of being Baphomet’s understudy and a shift back to the present, replacing their outlandish nakedness with that of the film’s protagonist, a DJ named Heidi, (Sheri Moon Zombie) who is sleeping in the buff. What was once a sign of defilement is now merely laziness, which doesn’t look so deadly a sin as the DJ grumbles out of bed to prepare for work.

In a pinch, the opening of The Lords of Salem could do as a summary of Zombie’s strengths as a purveyor of horror. He does not play against convention, per se; the witches really are witches, not simply tormented and persecuted women, and their curse returns to exact revenge upon the descendants of the town that murdered them. But even this new wrinkle of truly supernatural beings in Zombie’s more mortal oeuvre is humanized in the juxtaposition, teasing the supposed evil of covens as exhibited in nudity and wailing even as it confirms their evil in different ways.

Always incorporating old rock ‘n’ roll and old horror movies into his own work, Zombie finds perhaps his purest outlet yet in The Lords of Salem, which funnels tics both into the conceit and execution like never before. The witches’ old curse is brought to life in the grooves of a mysterious record sent to Heidi to play on her broadcast, a literalization of “devil’s music” that could have been Tipper Gore’s most feverish nightmare nearly 30 years ago as the sludgy noise-rock hypnotizes Heidi and conjures terrifying images and presences around her.

Those images bring out a borderline experimental side in Zombie, with cited references to Eurohorror, Ken Russell, The Shining and Roman Polanski’s apartment films. A dingy apartment door opens up into a grand European ballroom as Mozart’s Requiem plays to a scene of a face-painted Heidi holding two umbilical cords attached to a demon baby. Faceless creatures in surgical scrubs and vestments invade Heidi’s dreams to suck out her intestines like spaghetti. Zombie employs more jump scares than he normally does, but he avoids cheap technique by placing the startling object typically in the background, unnoticed by the person in the foreground and eerily immobile. Even less outwardly scary shots hum with static menace, like the hallway shots of Heidi’s apartment building, lit with cold, white orbs that seem to absorb heat and light rather than emit them. Muggy lighting has made the air dense and fetid in Zombie’s other films, but The Lords of Salem gasps in a vacuum.

That creeping sense of doom, slowly shifting atmospheric plates until a quake erupts, confirms Zombie as a preeminent modern horror filmmaker, as does his focus on the emotional impacts on the victims of his gruesome plots. The curse’s effect on Heidi plays with ideas of inherited sin and horror visited upon the innocent not dissimilar to the director’s study of monstrosity perpetuated through trauma in Halloween II. Both films gradually wear down their normal protagonists not into mincemeat or triumphant survivors but pawns of an elemental force that merely uses slashers and covens as its means of conveyance to the next host, who either perishes or is remade into the next link on the chain. So many employ nihilism as a cheap, nasty effect, but Zombie elevates it to its true, cosmic implications even as he remains empathetic to his characters. Heidi, with her white-girl dreads, sternum tattoo and history of drug addiction, is as normal and sympathetic as any virginal Final Girl, and Zombie’s horror gets its full impact from treating her as a human being and not simply a sheep being led to the slaughter.