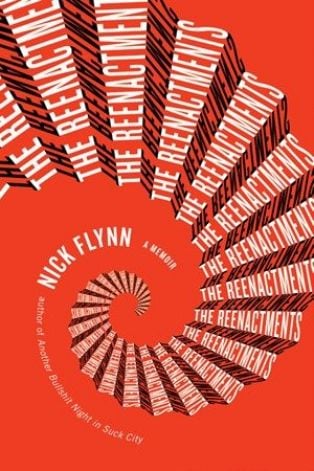 [xrr rating=3.0/5]Where does the human compulsion to recreate the past come from? What is it, exactly, we are recreating in our minds when we reconstruct our memories? These are the questions haunting Nick Flynn as he watches his first literary memoir reconstruction, Another Bullshit Night in Suck City, transformed into a Hollywood film.

The premise, like Flynn’s first brilliant book, has a ton of drama and intrigue on its side. His incredible story of a con-man father and spiraling mother gets transformed into a screenplay by indie wunderkind Paul Weitz. Julianne Moore is cast to play his mother, whose suicide has haunted him since the day the shot fired—not-so-coincidentally, right after finding a short story draft he’d written that may or may not have influenced her decision. The question has haunted him ever since. His pragmatic, homeless father is played by Robert De Niro, which stands alone as the best book query letter ever: This is about watching my deadbeat dad being played by The Godfather!

However, the parts of the book I found most compelling, most worth reading, most retained in my brain after setting the book down are the parallel threads Flynn has brought in on his memory meditation. There is a remarkable series of vignettes, or bursts of prose that could practically be labeled poems (common in Flynn’s other work as a memoirist and poet, as all familiar with his work will know), describing a natural history museum he visited at a child. At one side of the museum was an extensive menagerie of taxidermied animals, and on the other lived a collection of handmade glass flowers representing 830 species of flora. In other words, on one side of the museum lived the once-alive made immortal, and on the other was the representation of life, never animated. As Flynn describes, “the animals were once alive, and these flowers will never die.” What is more true, or relatable? As he recalls the cases of extinct birds on the taxidermy side, like the dodo, he contemplates:

One theory about our experience of memory is that it is less like a movie (a permanent emulsion of chemicals on celluloid) and more like a play (subtly different each time it’s performed). In this view memory arises from a network of cells, stored in various parts of the brain, or even in the body (body memory), constantly being reconsolidated, rewritten, remade, reenacted. Is this still true when the thing we remember now only exists in a glass case marked EXTINCT? Isn’t that the one play that is always the same, night after night?

These beautiful, haunting musings blend science, history, philosophy and art in to examine a phenomenon we don’t often think about. Remembering our lives is a natural human instinct, and only when someone as inquisitive as Flynn asks and delves into “why” do we begin to wonder ourselves. It is only through stopping in the midst of our obsessions that we can see what is haunting us, and how.

Such threads are meant to wind around the book’s core, which is the tale of having his life story made into a movie. Unfortunately the movie portions of the book seemed hollow and perhaps a few meta steps away from being relatable. Moore and De Niro aren’t fleshed out as characters, and only remain marquee names we’re meant to fill in from our past experiences watching them in other movies. The real characters of Flynn’s mother and father are also absent (except for a trip to see Flynn’s deteriorating father in a nursing home), people you will fail to know unless you’ve read Bullshit. Instead, Flynn seems to rely on the surrealism of “I am watching one of our country’s greatest actors play my father” and “I watch a man watch me playing me but he is not me” to bring life and introspection to these passages, but without understanding or caring for these people, I feel little reason to care about any of them. And while I found the original memoir’s telling of Flynn’s story unforgettably real and personal and relatable, filtering the experience through the lens of being reenacted left me a giant step removed. Instead of lending an extra step of depth to the experience, I felt a giant leap out of step with it.

As an unfortunate result, the magnificent threads Flynn spins around the hollow center fall away, unable to latch into a compelling whole. Which is the greatest tragedy of the book—failing to make a lasting impression as a cohesive work.