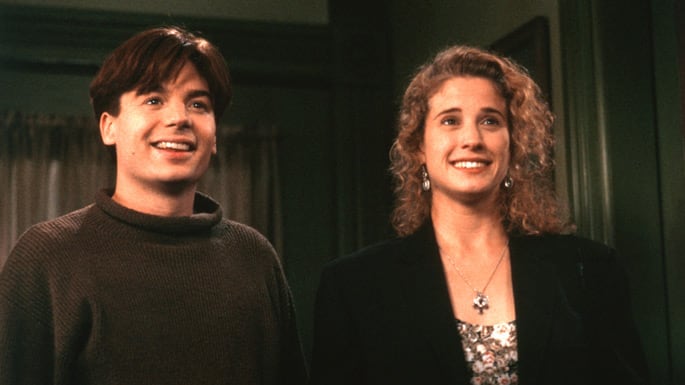 In recent years, Mike Myers has seen his star fall with the fury of well, a dying star. Like his fellow “Saturday Night Live” alumnus Eddie Murphy, he transitioned from television to massively successful starring films, only to take a turn into depressingly flat, gimmicky hack work that relied more on fat suits than actual comedy. While the Shrek franchise may have kept him active and unseen for the last decade, the huge commercial flop of The Love Guru (2008) and the aggressively hostile reviews of The Cat in the Hat (2003) appear to have stalled his career onscreen for at least the time being. It’s sad to see a great, exuberant comedian be reduced to caking on the make-up and tossing out jokes about anthropomorphic cat dick jokes in Dr. Seuss movies. Myer’s latter-day reliance on shtick might actually be understandable, if not excusable.

After the huge success of Wayne’s World (1992), the comedy world belonged to Myers. He’d become the breakout star of the most (periodically) revered sketch comedy show on air, he’d parlayed a slowly developed suburban dimwit character into a globally recognized hit film. He’d even arguably eclipsed his partner/rival Dana Carvey as the most popular comedian on television. But like most rising stars, it wasn’t enough to succeed at being funny on an enormous scale. He had to show range. So I Married An Axe Murderer, Myer’s follow up to Wayne’s World, posited him as a romantic leading man, albeit one in a dark, skewed take on a romantic comedy. More than that, it added a level of emotional realism to Myers’ onscreen persona, which had thus far been based almost entirely in goofiness and catchphrases. 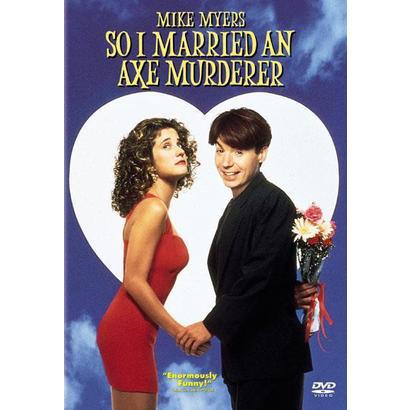 Not that So I Married an Axe Murderer isn’t a funny movie. It’s frequently hilarious, mining laughter from Charlie McKenzie’s (Myers) neuroses and his increasing paranoia. Charlie is a textbook arrested development young man; as his best friend Tony (a terrific Anthony LaPaglia) accuses, he’s a serial dater who continually finds outlandish reasons to break up with a girlfriend when things become serious. Examples, as filtered through Charlie’s terrible, terrible coffeehouse beatnik poetry, include: a kleptomaniac (“She stole my heart/ And my cat)”, while another claimed to be unemployed as a cover for her involvement with the Mafia. When he meets Harriet (Nancy Travis), a charming, funny, beautiful butcher who seems too perfect to be true, he manages to come up with the worst/best reason to break up with her yet: she’s Mrs. X, a possibly fictitious Black Widow claimed by no less than the Weekly World News to be murdering husbands on their honeymoons. And as much as he’d like to dismiss the notion, the evidence just keeps piling up.

As funny as So I Married an Axe Murderer is, it actually works better as a sly take on the kind of stunted mindset men like Charlie have. As Judd Apatow and his cohorts would do a decade later, Myers toes the line between sympathetic and simply pathetic with Charlie, switching between a genuinely funny young man and one that simply needs to cling to some kind of shield between himself and maturity. It’s not as pointed a film as Knocked Up or The 40 Year Old Virgin, but it’s not reaching for the same goals; instead, it more often builds a silly tension between what’s going on around Charlie and his nagging suspicion that the woman of his dreams might be trying to brutally murder him. Combined with a murderer’s row (pun!) of cameos, including Phil Hartman as a horrifically deadpan Alcatraz guide, the implacably irritable Charles Grodin and Alan Arkin as the most mellow police captain ever, So I Married an Axe Murderer is a truly unappreciated film. It tanked at the box office and received lukewarm reviews, and at the very least, 20 years on, it might just be the most ‘90s movie this side of Reality Bites (indicated by its un-ironic use of “Two Princes”). But it’s also a rare glimpse at Myers attempting to work outside of his comfort zone, and a welcome one. If he ever comes back to the spotlight, let’s hope it’s more of this and less of The Love Guru.