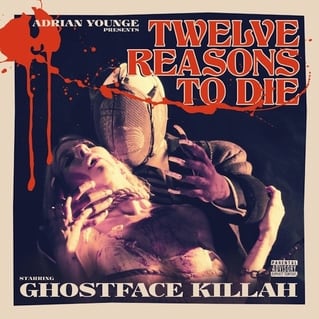 [xrr rating=3.25/5]Everybody loves a good Ghostface Killah jam. Easily the most consistent member of Wu-Tang, Ghost’s unmistakable voice, penchant for slang, gift for storytelling and unbridled charisma makes him one of rap’s absolute complete packages. Excelling in everything one could want from an MC, his work as a solo artist has delivered two undisputed classics in Ironman and Supreme Clientele, and the past decade has seen the flamboyant Ghost become the pop culture icon he was destined to be. Unfortunately, near the turn of the decade, Ghost began to lose focus by being too focused. Whether half-baked collaboration albums or transparently catering to a potential larger audience, for the first time the Ghostface magic was feeling forced, and for an artist whose greatest asset has always been creating his own world on records, his stab at occupying other terrain or recapturing former glories just felt all-around unsatisfactory. That’s why doing an album entirely with visionary producer Adrian Younge was the best move he could have possibly made. Ghostface devotees can rejoice, Twelve Reasons to Die is here and it’s wonderful.

There’s something very organically inspired about Ghostface’s performance here, and that motivation can be attributed to the circumstance of Younge’s production. Twelve Reasons to Die is the audio companion to a (semi-semi-)semi-autobiographic Ghostface graphic novel which retells his “origin story” as if it were a lost Italian horror movie from the ‘60s. It’s not only a unifying soundscape, but it taps into the type of material that made Ghost’s voice such a fresh and exciting presence in the first place. The bulk of classic Wu-Tang material was heavily influence by ‘70s martial arts films, the scores and sounds of which have been just as much a hallmark of the Wu-Tang records as the artists themselves. Instead of trying to recreate that classic Wu-sound (or worse, trying to make that sound meet today’s commercial appeal), Younge instead channels the sounds of the source material that Wu-Tang albums were culled from. The tender musicianship and lush soundscapes make Twelve Reasons to Die sound like the type of soundtrack that would have been sampled on those early Wu-records, giving Ghostface’s performance the same thrill of hearing his high-pitched snarl over the hiss of a cassette single 20 years ago.

Clocking in at under 40 minutes and only featuring appearances from longtime Wu-regulars, Twelve Reasons to Die is the closest a new Wu-release has come to feeling like a classic Wu-record yet. Ghostface’s storytelling and wit are sharp as ever, and even the lesser-quality guest appearances are so outlandish that they’re reminiscent of the unforgettable oddities of those early records as well. For instance, frequent Wu-satellite Cappadonna appears on “The Center of Attraction” as a voice trying to make sure Ghostface doesn’t get date raped by a white girl, and begins his verse with, “Nah, don’t even fall for that caucazoid / She got the drink laced, trying to turn you to [an] android.” It’s Cappadonna’s most bizarre moment since calling himself a “cab driver” on Ghostface’s 2006 album Fishscale and is just weird enough to ensure I listen to it every time.

Not even including his numerous collaboration albums, this is Ghostface’s 10th solo album. If you’ve been disappointed with or even skipped the past few Ghostface projects, Twelve Reasons to Die is a great place to pick back up with an old favorite. From the cinematic opening “Beware of the Stare,” which is the blaxploitation theme music we’ve always wanted to hear from Ghost, through the surprisingly effective closing instrumental title track, Twelve Reasons to Die is the record you’ve been wanting him to make for at least the past five years. Tony hasn’t been this Pretty while being this gritty in a while, and we’re all the better for it.