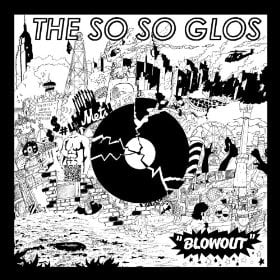 [xrr rating=3.75/5]There’s not a lot of artifice to the So So Glos. Or maybe there is. If so, however, they’re pretty good at disguising it. Listening to their records, it’s hard to believe that the band makes music with anyone in mind other than themselves. Hailing from Bay Ridge, Brooklyn, the band is comprised of brothers (through blood) Alex and Ryan Levine, joined by their brother (through marriage) Zach Staggers. Matt Elkin (no relation) rounds things out. The three brothers have been making music together since they were children and as the So So Glos since 2006. During that time they’ve helped found two Brooklyn DIY venues, Market Hotel and Shea Stadium, which have become anchors in the New York punk and indie communities. The band’s commitment to local music has been stellar, but they’ve gained little national recognition. You get the sense that they’re OK with that though, preferring to help build a community for people like themselves rather than score points with the Brooklyn Vegan crowd.

Since their self-titled debut in 2007, the So So Glos have managed only two releases, 2008’s mini-album Tourism/Terrorism and the Low Back Chain Shift EP in 2010. While their first album dealt heavily in the sugary ‘90s pop punk the band was raised on, the latter two releases saw them slowing down a little bit and branching both musically and lyrically. Blowout, their second full-length, which they’ve had in the can for almost a year now, finds the band going back to their ‘90s roots but taking a few new tricks along with them. Opening track and lead single “Son Of An American” sets the tone, starting with a snippet of audio featuring Alex Levine as a child joking about Kurt Cobain’s suicide. Cue the double-time scratchy guitars and chant-along lyrics and you’ve got a template for the record – heady doses of post-Nirvana pop rock nuggets made to be a soundtrack for the children of Clinton to dance to on their way through their dreary twenties.

Unlike their touring partners and Shea Stadium regulars Titus Andronicus, the So So Glos didn’t go to college and their albums don’t require crash courses in post-modernism or nineteenth century history to appreciate. The name “So So Glos” was a dig at the cool kids, the band’s short hand for the image-obsessed merchants of hip who populated the lower east side in the early ‘00s and have since gone on to colonize Williamsburg. Fittingly, Blowout is an old New York neighborhood record, steeped in a life filled with Bodegas and basement house parties. You can see this spirit in the field recording of a guy singing “New York, New York” in a subway that opens “Speakeasy,” one of the many songs that uses prickly guitar chords and assertive bass to help Alex Levine process his fears about aging.

Levine’s bass plays an even greater role on standout track “Lost Weekend,” an atmospheric number where he sings about fleeing the city and all its worries and problems with a girl by his side and a full bottle close at hand. This is followed by another song about a popular Millennial escape mechanism, this one pharmacological: “Xanax.” Built around a dreamy sample of Darlene Love’s “Strange Love,” it attacks the emotionally callow Prozac Nation-approach to pain management that Levine complains “just want[s] to dumb you down.” Elsewhere, the So So Glos more familiar brand of blasted pop punk asserts itself on ragers, including the title track, “House of Glass” and “Diss Town,” the latter’s chorus a satisfying shout-along complaint that “THIS-TOWN-IS/ A-POC-LYPSE!”

When Blowout finally skids to a close it’s with the acoustic ditty “Dizzy” that, complete with wistful harmonica, sums up the record nicely. Levine worries that he’s too old for his girlfriend, that the world’s moving too fast, that he’s about to lose his footing. Blowout is a record written for the underdogs but not necessarily to tell them that they’re bound to win. The band knows they’re just gonna keep getting older, their city is gonna keep getting more gentrified and the odds of their getting a big break are gonna get less favorable. Levine sings about how he likes to “cheer for the losing team” and “live my life in a rally cap” (in case you couldn’t tell, we’re dealing with Mets fans here) and it’s this spirit that the album celebrates. The So So Glos response to a rigged game isn’t to bitch about the outcome but rather to find joy in the struggle, even if it’s doomed.